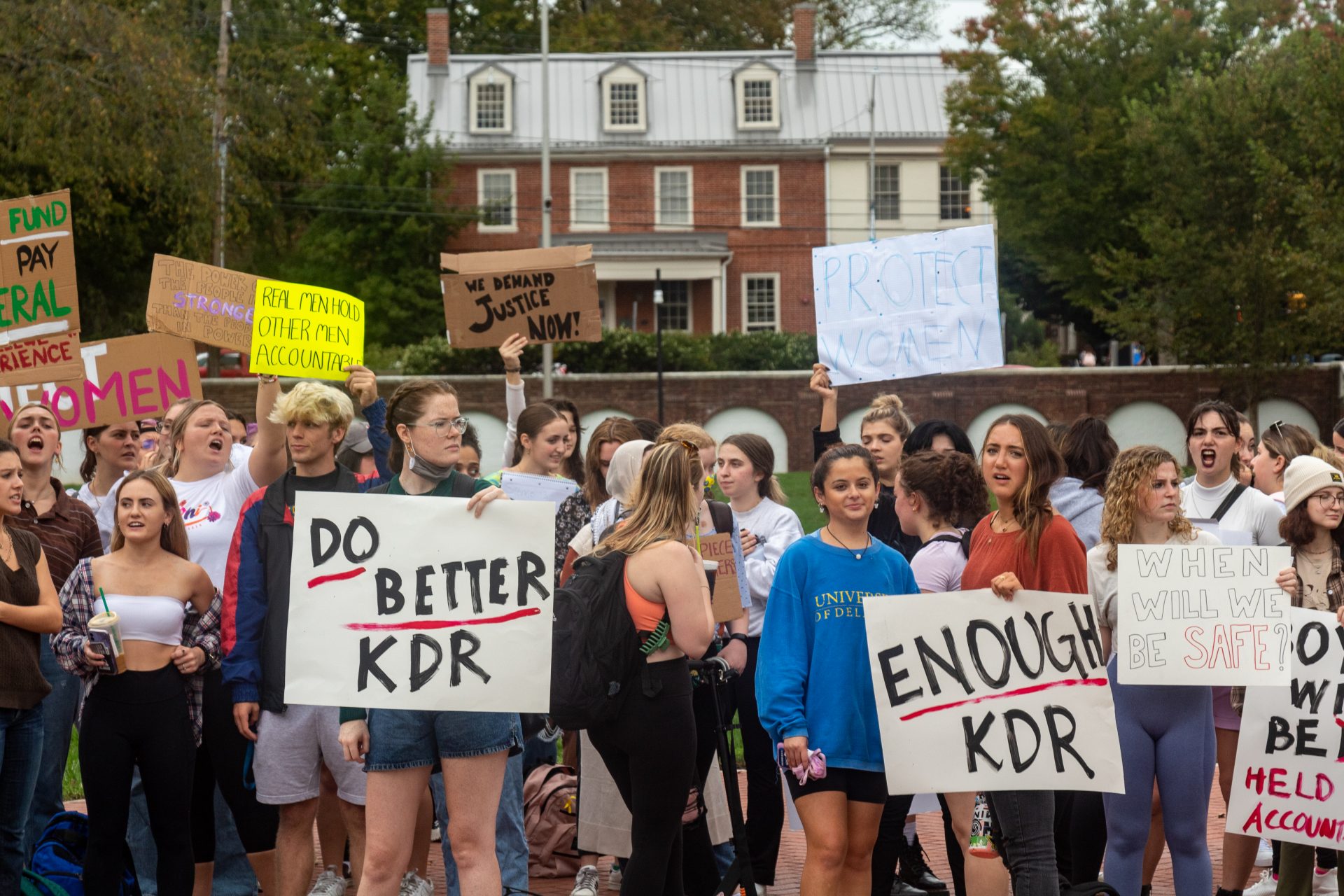 Today, university students rallied in protest of violence against women on campus after Brandon Freyre, a sophomore at the university, was charged with kidnapping, assault and strangulation of a female victim on Oct. 11.

The protest began outside of the house of Freyre’s fraternity, Kappa Delta Rho, at 28 North Chapel St. at noon on Oct. 12.

“A man in [Kappa Delta Rho] absolutely brutalized a woman on Thursday night and we are here to protest not only him and the frat but also the violence against women that is allowed to occur on campus,” Sarah Scott, a junior at the university, said.

Protesters chanted “silence is compliance” as they pointed to onlookers who watched from porches of neighboring fraternity houses.

“It was an awful thing that happened, and he deserves the worst for it, but I don’t think you can categorize an entire group of people based off one person’s actions,” a university student, who asked only to be identified as Luke, said. “I agree with them, but I’m not going over there to protest.”

The protesters made their way down Main Street and South College Avenue to the North Green around 1 p.m., where more people joined in their chants.

“It’s terrifying to be a woman on campus knowing that this happened so close to our home,” Sydney Luning, a junior at the university said. “There definitely needs to be repercussions. The President [Assanis] needs to address what happened because it affects such a large population of our student body.”

The university’s Director of External Relations, Andrea Boyle Tippett, reported that the Dean of Students spoke with the victim on Oct. 12, and that Freyre was suspended from the university on Oct. 11.

As of the time of publication, the university has not made a statement regarding the assault.

“I think we take our statements pretty seriously, and we really think about ‘what’s the tone that we want to strike with the statement?’ and by that I mean it’s important to denounce behavior that we believe is not in line with our values,” university Vice President for Student Life, José-Luis Riera said, approximately three hours after the protest concluded for the day. “I certainly would suspect that by tomorrow morning we’ll get something out to students.”

Lillian Presley, a university student, was frustrated with the university’s lack of response.

“I understand that sometimes it takes time for a response … but I feel like with how bad of an issue this was there should have been a statement issued sooner,” Presley said.

Boyle Tippett and Riera said it’s not that simple.

“It’s not just as simple as … immediately decrying [the] situation because that also loses its resonance as well,” Boyle Tippett said. “When you’re constantly saying ‘we’re against this, we’re against that’ … it becomes repetitive, and it’s not what’s going to benefit students.”

“There have been no past incidents of violence [at the fraternity],” Boyle Tippett said. “The past incidents that they were cited for were alcohol, noise violations and … having members who were not meeting their GPA requirements.”

Riera explained that there were programs offered from the university to prevent sexual assault.

“If you become a new member in the semester, you’re required to go through sexual violence and gender-based violence education,” Riera said. “We continue to roll that education out, even beyond your new membership time.”

“We’ve had enough,” Mollie Maltin, a senior at the university, said. “Frat culture allows systemic violence over and over and over again. We are sick of being beaten up.”

Gefen Galfand, a junior at the university and a member of Greek life, said that she was disappointed to see that many Greek chapters have released statements while the university has not.