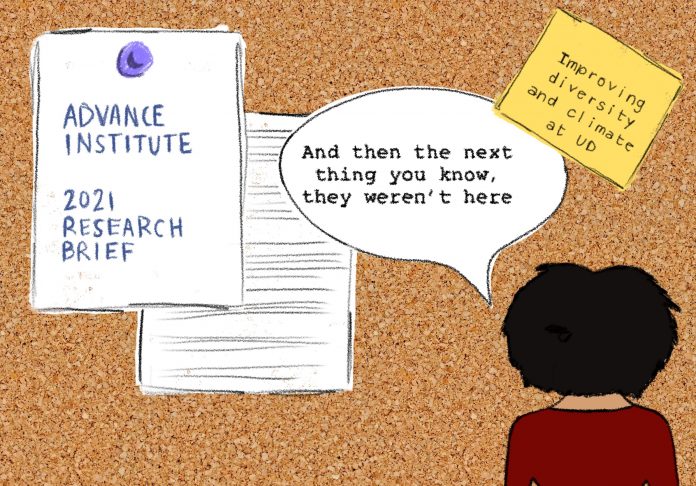 Long-standing concerns over the low retention of women of color faculty at the university has led to ongoing internal research from the ADVANCE Institute about the experiences of this identity group and the changes the university must take to improve this situation.

The ADVANCE Institute is a branch of the university with the aim of improving faculty recruitment, retention and development. The Institute gathers data on how to do so through research on existing faculty groups.

One instance of departures of women of color faculty took place in the summer of 2019, when Carol Henderson, the former vice provost for diversity, and Gabrielle Foreman, a scholar of African American studies, left the university to work at Emory University and Penn State University, respectively. These departures prompted concern among members of the university community regarding diversity in the classroom, the standing of African American studies and the broader study of the humanities at the university.

Oyenike Olabisi, an associate professor in the biological sciences department, has personally felt the impact of these faculty departures over the past several years, particularly the departure of Henderson.

According to Olabisi, Henderson built a community on campus entitled “Sister Scholars,” a network of Black, female faculty on campus that met up to discuss their personal issues and thoughts. Olabisi said that Sister Scholars still exists on campus, but lacks the funding that a senior administrator like Henderson could bring to it.

“It is deflating, because you look up to them … [as people] who give you visibility and hope that you can aspire to be that,” Olabisi said. “And then the next thing you know, they weren’t here.”

Similarly, the report mentions that “several respondents pointed to the negative experiences of colleagues that left as evidence that they should not trust administrators to value their contributions and make robust retention efforts in the future.”

Kathryn Benjamin Golden, an assistant professor of Africana studies at the university, was hired at the end of the 2020 spring semester.

“I was excited to join [the Africana studies department], because it was formidable in the quantity and quality of Black-centered scholars …” Benjamin Golden said. “But little did I know, many of them were leaving.”

Benjamin Golden added that the department now has three fewer faculty members than when she was being hired for this position.

“We remain formidable, we remain doing the work, but it becomes all that much harder …” Benjamin Golden said. “The burden of labor as faculty that we have to take on to carry ourselves in a small department like Africana studies is a difficult thing to navigate, and yet, we do.”

Additionally, the report says that respondents dealt with gender-based microaggressions in the workplace, carrying a disproportionate service load compared to their white colleagues and the feeling that the bar for getting tenure is higher for them.

“UD is very concerned with appearances and with politeness and with looking a certain way, but as an institution, you asked me, do we value diversity?” One respondent of the research said (All respondents in ADVANCE’s report are de-identified). “We don’t act like we do. We don’t act like it’s enough of a value, like it’s a priority …”

Olabisi echoed the report’s claims of women of color faculty often having to deal with these microaggressions.

“Overall, most of the students at the university are respectful and open to learning and, you know, just quite welcoming,” Olabisi said. “You do have the occasional interactions that are not positive.”

Olabisi said that this tension often results in her having to work harder to prove her credibility in class. She always dresses formally, for instance, for this reason.

The brief made a total of 11 recommendations for the university to better improve the climate at the university for this identity group, including investing in faculty recruitment, hiring in cohorts and broadening areas of scholarship that are valued at the university.

“Create an inclusive environment, where people are valued and feel as though they belong,” the researchers wrote in one recommendation. “A hostile environment takes a mental toll on people. They leave.”

For Benjamin Golden, a solution for the retention of Black women faculty simply boils down to hiring more of them.

“When we feel marginalized or when we feel there aren’t enough of us thinking the way that we’re thinking … it becomes difficult to do the work because it requires conversation and it requires collaborative interventions and thought …” Benjamin Golden said. “There should be hires intended to locate people doing work … that reflects the justice imperative, that reflects an interest in social change, social progress … but you also want to be intentional about [generally] looking for women, looking for faculty of color.”

Matt Kinservik, vice provost for faculty affairs, said ADVANCE’s most recent report was “provided to and discussed with the deans, the provosts, the vice provosts and the vice president level of the university.” Additionally, this research was presented in an event targeted to the entire university community entitled “Experiences of Women of Color Faculty at UD” on Feb. 2.

“We’re in the next stage of working more directly with some administrators doing some sort of smaller sessions to discuss more specific actions that can be taken based on the recommendations,” Robin Andreason, co-principal investigator of ADVANCE said.