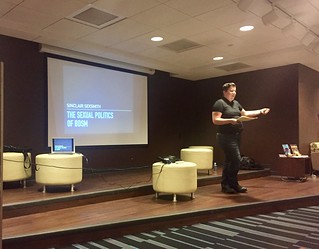 Growing up in a small town in Alaska, Sexsmith, who identifies as nonbinary and uses they/them pronouns, had limited access to information about sex and gender. They learned what they could from Internet chat groups and by reading every sex book in the library, until they left home at 16 because they felt that something else was out there.

Not having a community to talk with about their interests, Sexsmith says, made teenage years more confusing than they needed to be.

“Everything I do now is to work on healing that 14-year-old,” Sexsmith says.

Sexsmith says the main goal of their studies is to figure out how people can prioritize their own desires.

“Prioritizing our satisfaction is a liberating act, because it fuels us in a way so that we can go and do our other work,” they say.

Haven secretary Riley Thomas says that they’ve wanted to do something like this at the university for a long time.

“People are afraid to talk about it because it’s so taboo,” she says.

Director of Diversity and Inclusion for Haven Maural Sowlat says it was good to have a workshop like this at the university for so many reasons, especially with sexual abuse issues on college campuses.

S and M is not abuse, Sexsmith says, but that can still happen. They addressed that although it’s important to have a like-minded community of people to talk to about sexual interests, oppression still exists.

“A lot of these things can be fetishized,” Sexsmith says. “But that’s not the same as being liberated.”

They said that right now, the culture is having a hard time addressing consent.