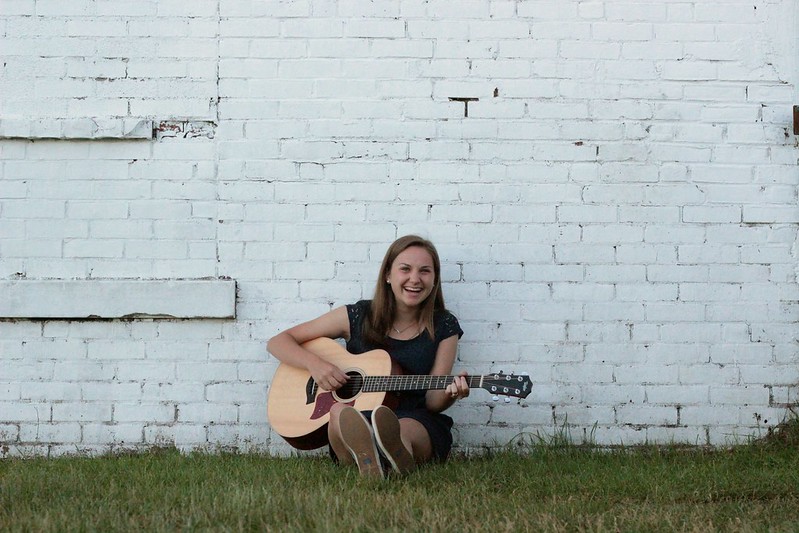 Four years ago, Marielle Kraft stood on stage at her Rhode Island high school’s talent show with a $90 acoustic guitar, a recent gift. At the time, she knew only three chords.

“I’m pretty sure I didn’t blink the whole time and might have blacked out during it,” Kraft says of her high school performance of Sara Bareilles’ “King of Anything.” “I guess it went pretty well.”

Now, the 19-year-old sophomore is celebrating the July release of her five-song EP, “Today Tomorrow Someday.” She says she believes the songs best shape the story she is hoping to tell.

“I wanted to have physical copies to hold and say, ‘I made this,’ and give it to people to say, ‘My friend Marielle made this,’” Kraft says.

Kraft has written about 30 to 40 songs, has 900 YouTube subscribers and frequents coffee shops to sing covers and some originals.

Kraft recorded with Dave DeWhitt, her uncle’s old friend. After meeting with Kraft and hearing her music, DeWhitt asked to record with her at his Midnight Muse Studios in Newark. She recorded the album last spring when she would be in studio for four to five hours at a time.

When arranging the songs, Kraft would sing or play a certain riff or background melody on the guitar for DeWhitt to translate onto other instruments, including the drums, piano, mandolin, shaker, organ and accordion.

Explaining each song in her EP, Kraft starts at the first song, “Alive” which she wrote and performed for her high school graduation ceremony in front of a 2,000-person crowd. Her second song, “All Along” uncovers feelings about a summer romance.

“Everyone has to have a cute song about a boy on their album,” Kraft says.

“Drive” ties the album together, capturing the times when one realizes life is changing, she says. Song four, “And We Danced” is her favorite—the quickest, most mindless song she says she has ever written because of the emotion behind it. The lyrics are based on an elderly couple’s love story.

“Back Home” has lyrics that speak of journeying far but always returning to the place where all is familiar.

“We’re about to go off and do amazing things in the world, but we will always share a part of the world together,” Kraft says of the song.

If she had to declare a level of desirable fame, she says it would be that of Colbie Caillat.

She says a more realistic dream job is to be a third-grade teacher, in which she would use the ukulele to teach geography. However, if other opportunities keep popping up, she says she will not reject them.

“I just want to be able to play at a coffee shop on the weekend and have people come up to me and say, ‘I really enjoyed hearing you play,’” Kraft says.

When she hears a quote that sticks with her, she writes it in her phone notepad and uses it for inspiration. Other times, when she starts experimenting on her guitar, she goes along with the feeling she gets from a certain chord progression.

Kraft entered the music-making process with no intent of making money—she just wanted to share her music with as many people as possible, she says. She used CD Baby, a distributor for independent artists, to dispense her music to different sites and search engines such as Amazon, Google Play and Ardio.

Her music is available for purchase on iTunes and for free download on SoundCloud and NoiseTrade.

Through NoiseTrade, Kraft can see that she’s had over 1,000 downloads from locations as far as London, Hong Kong and Indonesia. The week after her EP’s release, NoiseTrade contacted Kraft and featured her on its homepage for a full week as a “new and notable artist.”

For now, the elementary education major is focusing on school, club lacrosse and her responsibilities as an alumni ambassador and member of Student Centers Programming Advisory Board.

On a recent trip to New York to see her favorite artist Betty Who, a stranger overheard Kraft singing to herself and asked if she was an artist.

“I must have not been singing as softly as I thought,” Kraft says.

“Every few days, people say they just listened to my music for the first time or just put me on their iPod and it makes my day,” Kraft says.