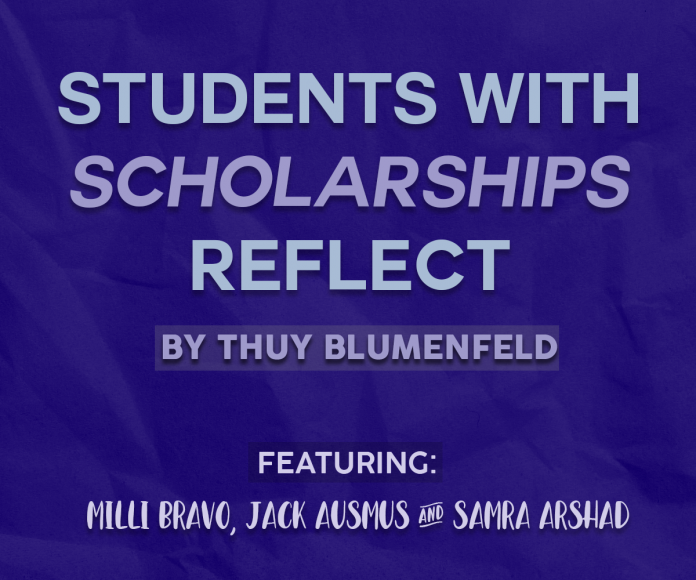 Editor’s Note: Milli Bravo is a former member of The Review. Bravo has not reported for The Review since the fall of 2020.

Senior English major Milli Bravo has the UD Assistance Grant, which is given to undocumented and Deferred Action for Childhood Arrivals (DACA) students from Delaware. The grant allows for students to receive in-state tuition costs and formally labels them as international students at the university due to their lack of citizenship.

Bravo said that she found out about the grant through a mentor of hers.

“I did not know about the Assistance Grant that UD offered undocumented and DACA students,” Bravo said. “Most of the people I’ve talked with have said that they found out about it through word of mouth, from family members, friends and cousins. With their connections, they were able to talk to heads of the university who then emailed financial aid and provided me with the information about the grant.”

“The grant was the difference between going into higher education or getting a minimum wage job,” Bravo said. “I would have never been able to afford attending university without it.”

As far as stress, Bravo said that she feels pressure not from the academic requirements, but from the uncertainty surrounding her situation.

“The scholarship puts a lot of stress on me as well as the grant, since we never know how much they will give us,” Bravo said. “It changes every semester, and it’s not guaranteed.”

Despite this pressure, Bravo said she recognizes all that the grant and the scholarship have allowed her to do.

“I am always trying to make sure that I meet my class requirements,” Bravo said. “Without [the grant], I would have to do what a lot of my friends and classmates have done — especially undocumented and DACA students because they aren’t able to take out loans — and take a semester off to save money.”

Senior history major Jack Ausmus receives the Eugene du Pont Memorial Scholarship, which is only given to about 6 to 8 students per year.

Ausmus applied for the university’s honors program and, from his application, was selected by admissions to come to a competition weekend. Over the weekend, students go through rounds of interviews to determine what scholarship they will receive.

“Basically, everybody who gets invited to that weekend gets a pretty good scholarship,” Ausmus said. “But the top scholarship of the weekend — which is the one that I ended up getting — is basically full tuition, room and board, for four years.”

Ausmus said that his scholarship was the determining factor in his decision to come to the university, which he applied to as a “safety” school.

“That is the entire reason that I came here,” Ausmus said. “Full transparency. I had my heart set on another school. I’d gotten in there and I’d gotten into their honors program. I was basically all set — I had all but made my deposit. Then UD contacted me about this.”

As far as pressure put on by the scholarship, Ausmus said he finds academic requirements to be pretty lenient.

“You have to maintain a 3.0 GPA, which is not particularly difficult for a lot of people — especially if you are coming from the caliber of student that they say they’re recruiting for these types of things,” Ausmus said. “So, in some ways, I think that the requirements to keep the scholarship should definitely be more stringent.”

Overall, Ausmus said that the scholarship is what each individual student makes of it.

“There are certain people that really take advantage of the opportunities that are afforded by the scholarship and do really amazing things with it,” Ausmus said. “And then there’s the people that kind of lay back on it and use it as a cushion of, ‘Oh well, I got a full ride, so I’m just gonna do whatever I wanna do.’”

Junior neuroscience major Samra Arshad had both the UD Trustee Scholarship and the Scholarship Incentive Prg-Sprg [Program Spring] during the spring semester of her freshman year, her first semester at the university.

The scholarship[s] requires students to maintain a GPA above 3.2. Arshad said she had a hectic first semester and her GPA dropped, causing her to lose her scholarships.

Arshad said losing the scholarships ultimately caused her more stress than having them ever did.

“In a way, [having a scholarship] was helping,” Arshad said. “But as soon as I did not have it, it did cause me pressure because I was trying to reach the requirements [to] have it back which would help me with financial issues.”

The scholarships helped Arshad make her decision to come to the university.

Arshad said that she views any pressure from her scholarships as a positive that drives her to excel in her classes.

Arshad said she understands that any sacrifices she has made for her scholarship will only benefit her in the long run.

“I feel like you become more responsible in a way,” Arshad said. “You have to cut out on the things that you actually enjoy but keep up with the things that will make your future better, which also includes the scholarship [and] keeping up with your grades.”