“The deli as a secular synagogue”: Author discusses history of the Jewish deli 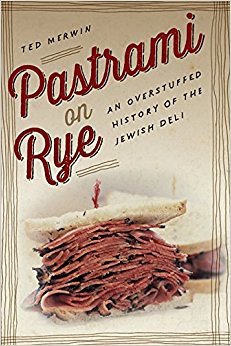 Courtesy of NYU Press
During his lecture on Wednesday, author Ted Merwin discussed Judaism in America and the role of food plays in shaping ethnic, religious and cultural identity.

During his lecture on Wednesday, author Ted Merwin juxtaposed two seemingly extraneous experiences: attending college in the 21st century and going to a Jewish deli in New York in the mid-20th century.

Most students go to college expecting to transform and transition into adulthood. Likewise, Jewish immigrants went to Jewish delis to adapt to their new American identities, while also staying connected to their Jewish roots. These immigrants, still adjusting to the drastic uproot of moving to the United States, hungered to feel less isolated and more American.

Merwin made this connection during a discussion of his book, “Pastrami on Rye: An Overstuffed History of the Jewish Deli,” on Wednesday in Memorial Hall.

“The delicatessen was a place for transformation,” Merwin said. “It was a place where people would come in and they could leave feeling differently from the way they had felt before.”

His lecture was part of the course “Topics in Jewish History: Jews and Foods,” taught by Roger Horowitz. The three-credit introductory course focuses on topics in Jewish history, ranging from the development of religion to modern Jewish demography.

Merwin, an associate professor of Judaic studies at Dickinson College, studies Judaism in America, including the role food plays in ethnic, religious and cultural identity. He has written two books relating to this topic, his most recent being “Pastrami on Rye,” winner of the 2015 National Jewish Book Award from the Jewish Book Council.

“The deli was a place where Jews could fantasize and masquerade as Americans,” Merwin said. “By eating out and eating nice food, they could do something recognizably American.”

Jewish delis became social spaces for Jewish immigrants and a way to connect to their heritage as they began assimilating into American culture. Over hot pastrami and corned beef sandwiches, Jews conversed about the daily trials and perks of their new lives.

Merwin related this notion to the theme song of the American sitcom “Cheers,” in which he found inspiration for a chapter title in his book – “The Place Where Everyone Knows Your Name.”

“The delis acted as a third space for Jewish immigrants — not home, not work but an intermediate gathering place,” Merwin said. “They could feel a sense of connection with people who weren’t necessarily their best friends or family members.”

He noted the struggle many immigrants faced as they tried to balance harboring their own Jewish identities while also submerging themselves into American culture. The deli exemplified this “push and pull” of Jewish American life in the mid-20th century.

Merwin claimed that it was the second generation of Jews in America that fully embraced the deli. With the birth of the celebrity culture in New York in the 1920s, the delicatessens became hangout spots for stars as well as the Jewish community.

“Jews could vicariously participate in the exciting and fast-changing kind of world of the celebrity culture,” Merwin said.

He pointed out the irony in this collective fantasy, as New York in the 1920s was littered with anti-Semitic sentiments. However, the Jewish community seemed to bond over the shared dream of future success and acceptance.

After reaching this success and affluence, Jews increasingly turned away from Jewish delis, casting them as unbecoming and lower class. Other types of ethnic food, most popularly Chinese food, started to replace Jewish deli food.

Now, with only a handful of Jewish delis still operating in New York, the 21st century deli doesn’t serve the same functions anymore, Merwin said. It no longer seems to act as the secular center of Jewish American life.

Leaving students with a stimulating question, Merwin optimistically asked, “Is there any space anymore for Jews to create the kind of secular gathering place like the deli?”