It’s a Monday night, and some scrappy misfits are sitting in the Perkins West Annex, dust floating, stale coffee wafting through the air, clicking furiously in their cubicles.

All’s serious and silent, until an expletive comes ringing across the newsroom.

Then another. Then maybe some laughter. Then maybe an extended debate on gender politics; or a diatribe on the perils of artificial intelligence; or a live reading from the Gideon’s New Testament; or some contemplation over the nature of truth, and whether it really requires that we confirm this quote…no, dammit, it does, lemme make a call; or speculation over how many copies of The Review sit in ashes in the Presidential Mansion fireplace; or if this month’s Faculty Senate meeting really needs to be in print, I mean screw it, don’t even send the poor kid, we’ll just get the minutes; or whether that old guy from that same department really needs to be quoted for the fifth consecutive week, like come on guys, aren’t you noticing this?; or do the cars in Cars have sex? Because they have to, because there’s kid cars and parent cars… But how? Through the tailpipe, maybe? What’s a tailpipe?

When I walk each evening past the now-empty West Annex, these scenes fill my mind, along with some strange images of automobiles. Walking past that old, moldy pile of brick, I think about all of the impassioned disputes, the nerdy weirdness and the shared conviction that have defined my four years here.

Because in that old, moldy pile of brick, you’ll find the smartest people on campus, and those most committed to it.

You’ll find people who, week after week, without pay, scramble across campus with notepads, pestering peers doing homework and eating, suffering through the condescension of professors and winding obfuscation of administrators. You’ll find people whose talents are exceeded only by their commitment to keeping this campus held accountable and informed, even at the expense of sleep and grades. And you’ll find the people with some of the best humor, biggest hearts and sharpest intellects at the University of Delaware.

My four years at this newspaper have, for these reasons, because of these people, been the most thrilling and unforgettable of my life. The countless nights in that office, the countless interviews and the countless articles have convinced me not only to stay at this place, but to fight for it.

Because we’ve fought, week after week, against forces larger than any one of us, but which tend to be reducible to a few delusional professors, quite a few mindless students and a few people making more than a few bad decisions in Hullihen.

And while we haven’t always won, we’ve met some success. Of course, in journalism, you’re never supposed to claim you were responsible for much of anything. But you can look at the dots and connect them.

So allow me to present some dots, and I’ll allow you to connect them.

A transphobic provocateur took some heat in our pages; he arrived to an empty Mitchell Hall. We put sustained pressure on an administration intent on stripping its faculty of benefits; a deal was struck. We wrote about a cash-hungry credit policy; the cap was lifted. Some volleyball coaches mysteriously disappeared; we found out why. We wrote about a donor and trustee accused of workplace sexual harassment; he is now neither a donor nor trustee. We wrote about some of his buddies on the board, and how they were illegally holding unadvertised retreats; advertisements began appearing across campus. A lie was exposed at the entry to Morris Library; it was removed and replaced. A column was written proposing an Honors College; a year later, the College was created. Some bunk internships were debunked; wider change followed. The student veteran experience was brought to broader attention; improvements were announced. Our “public-private” status was exposed for the unfounded nonsense it is; some questioning happened down state. A pandemic struck, and we kept you informed with coverage on par with the pros.

And there was also this.

To anyone who says student press doesn’t matter, I invite you to click on the above links.

But these victories (a non-exhaustive and biased sample, I’ll add), however small or large, are overshadowed by all that hasn’t changed. I can say confidently that this university is in a better place today than it might otherwise be, due in no small part to The Review. But it’s also a place where DACA students continue to live in fear and uncertainty. A place where students of color endure daily racism, and where every day is a lived struggle. A place where sexual assault and misogyny remain pervasive. A place where one can rationally expect to be called hideously homophobic names by strangers sporting Greek letters walking home on a Saturday, and where profit informs policy more than student needs. Students continue to be robbed of their educations, and corporate greed continues to dominate administrative decision-making.

(To digress briefly: One common denominator beneath these problems is the frats, an institution that received far, far too little scrutiny in my time here, due in no small part to institutionally reinforced secrecy and frequent, university-sponsored cover-ups. Only when their corrupting influence is banished from this university, left to wither like the moral rot that they are, will real improvement be possible.)

Victories aside, I cannot help but regret all that went unaddressed, and, in more cases than I’d like to admit, unwritten.

Fortunately, The Review is welcoming one of the strongest staffs it has seen in years. Shreya and Nushi: Your sterling intelligence, sound judgement, razor wit and radiant compassion will take this newsroom in directions I could only have dreamed of. And you’re supported by a brilliant lineup of editors and reporters. You have seen strong and poor leadership, witnessed and understood what this newspaper can do, but also seen how fragile it all is. Yet each week, this semester and last, you have inspired me with your unwavering creativity, your tenacity and your commitment to this newsroom’s mission.

And you’re entering uncharted territory, at a time when that office is empty and when the newsroom has migrated to Zoom rooms. You will have to make critical decisions without precedent. It will be hard, for these reasons and for others. There are forces on campus, from students, administrators and faculty alike, devoted fully to crushing you. If you do your jobs well, you will be bullied by the propagandists, and mobs committed to your ruin will materialize online around falsehoods and distortions. (And you might even end up with some mild anxiety and resulting chronic insomnia….ha!) Some stories will be easier to dismiss and forget than to publish and plug, and you must extinguish the impulse to self-censor whenever it arises. More than a couple of times — when the papers come late, or the Macs malfunction, or when your inbox nearly induces a stroke — you’ll come to the brink of quitting.

But if you stay committed to the facts, to challenging this campus and keeping it informed, and if you lean fully on one another, the rest will take care of itself. Don’t let anything or anyone stop you in pursuing truth and upholding integrity, here and beyond.

But don’t lose yourself to it, either. Don’t give an ounce more to this newspaper or to this university than they’re willing to give back to you. They will come to owe you a great deal, a debt you cannot count on them to repay. So ignore that email from time to time, and take a week off — or two — if you need to.

And above all, to everyone returning, have fun. You’re part of a legendary lineage known as much for its muckraking as its ability to have a good time. (And done right, of course, the two are hardly exclusive). Take that seriously, and make the coming year a memorable one.

I have done everything within my power to ensure you are inheriting a better paper than I did. I have devoted this year to training the paper’s next generation, to securing financial stability for years to come. I have tried, with varying amounts of success, to take this newspaper in unprecedented directions. I have sought (and just as often failed, frequently to my embarrassment) to change this campus — from bringing obscure policies to light to effecting wholesale cultural shifts — and to reassert The Review’s role on it. Letting go, this year and last, has been harder than I could possibly have foreseen.

But this paper is yours now — so own it. I cannot wait to see where you take it, and in this washed up former editor, expect to find your most faithful reader and supporter, even if reading from afar rather than from The Scrounge. (So make sure that newsletter gets out!)

And you, dear reader, should be just as excited. You need this paper more than ever before right now, but the converse holds just as true. Be hard on them, but read and think before you speak. Engage with them. Send them letters. Use their opinion page to use your voice. When the next Big One drops on the steps of Hullihen, make it worth their while and raise some hell; when the Big One doesn’t come, email them with the tip. You — the students, staff, and faculty of this institution — are its heart, and in that heart lies limitless potential to bring a robust, engaged and critical campus to life. But you have to care enough to do something with it. To rebuild a university that serves not only administrative pocketbooks, but those who really run the place.

Stay loud. Give a shit. Never apologize for doing either.

And above all, keep the god damned faith.

Caleb Owens is a former Staff Reporter, Senior Reporter, Copy Editor, Managing News Editor, Editor in Chief, Columnist and Development Officer for The Review. He can be reached at calowens@udel.edu. 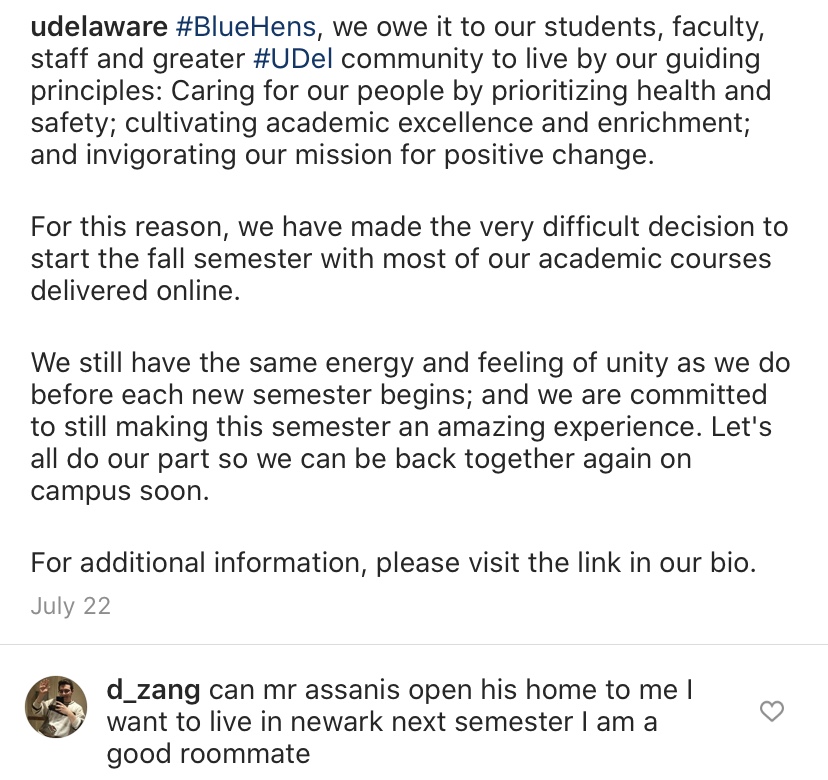