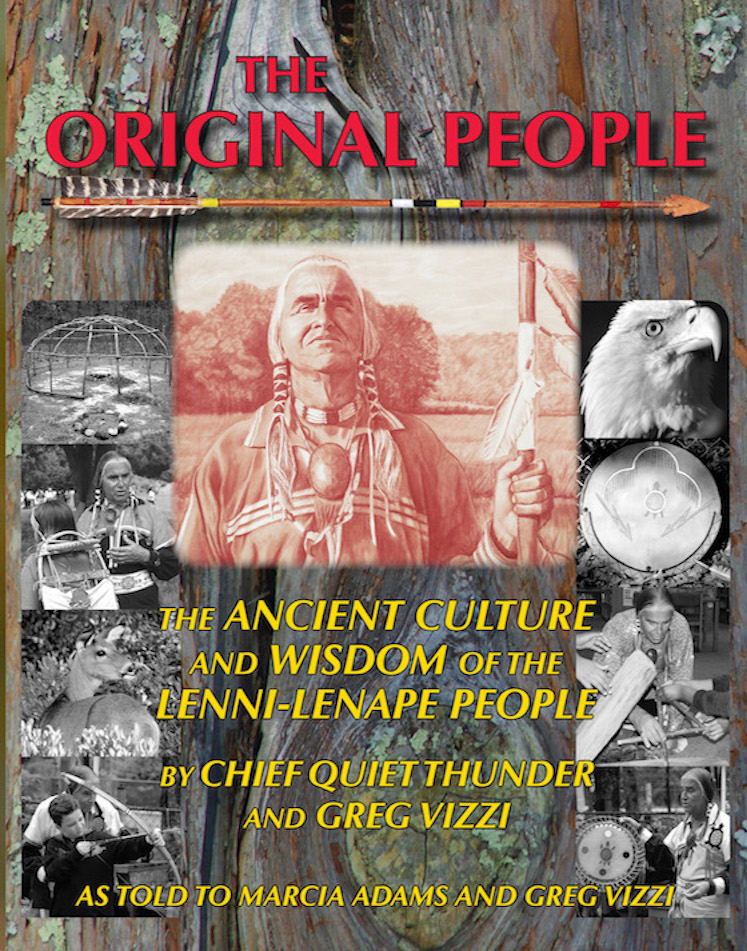 Whether walking across The Green or driving through the state of Delaware, it is not usual to consider that these were once ancestral homelands of the Lenni-Lenape people.

An indigenous people located in Lenapehoking, a large territory encompassing the Delaware Valley, have origins that date back to the 17th century. Derived from the Unami language, Lenni-Lenape means “original people,” and they were one of the first American Indian tribes to make contact with the Europeans. With a history forgotten and a story that is not well known, passing down the cultural traditions and teachings of the tribe is not something that comes easy.

But one man, Chief Quiet Thunder, made it his life’s work.

A devoted husband, father and grandfather, Richard “Quiet Thunder” Gilbert (1934-2020) was a Native American elder from Woodbury, New Jersey, and past chief of the Nanticoke Lenni-Lenape of New Jersey. For more than 30 years, he educated thousands of people both young and old on the matters of “protecting Mother Earth” and of the history and traditions of the Lenape people.

Although he enjoyed his work immensely, the 80-year-old Lenni-Lenape felt it was his “sacred” obligation to keep his culture alive.

“I am Indian, and my aim, my joy and my pride is to sing the glories of my own people. My concern is to rekindle the ancestral fires of hope and inspiration within their own circles,” Quiet Thunder said in an excerpt from his book, “The Original People: The Ancient Culture and Wisdom of the Lenni-Lenape People,” which was published five days before his passing.

On Tuesday, Feb. 23, the Indigenous Programming subcommittee of the university’s Antiracism Initiative presented its inaugural event in honor of Quiet Thunder. In support of indigenous cultures, the subcommittee works to educate the university and broader community with a particular focus on local history and culture as an institution. Featuring prominent members of the Lenni-Lenape tribe, more than 300 participants were in attendance at the Zoom event.

Initiating the event was Chief Dennis Coker of the Delaware Lenape tribe. As a respected speaker and storyteller, he has helped educate diverse leadership and fostered the Delaware General Assembly’s proclamation that all residents celebrate November as Native American Heritage Month and learn to honor the first people of the first state.

Coker recited the Haudenosaunee Thanksgiving Address, a prayer that is traditionally spoken to open or closed gatherings, to express gratitude for the living world.

“We gather our minds to greet and thank the enlightened teachers who have come to help throughout the ages,” Coker said in prayer. “When we forget how to live in harmony, they remind us of the way we were instructed to live as people.”

Greg Vizzi, co-author of “The Original People” and a good friend of Quiet Thunder for over 25 years, was also in attendance.

A nature photographer and permaculture designer based in Sweetwater, New Jersey, his earliest childhood memories originated in his fondness for nature. It was the first of many things he and Quiet Thunder connected on when they first met at a Columbus Day Indian Festival in the late ‘80s. Vizzi said he was “thrilled” to meet a Native American who grew up in New Jersey.

“Many of the things we talked about resonated with me and left a strong impression,” Vizzi said.

Eventually, the two became good friends and collaborated to produce “The Original People,” an eight-chapter book about the chief’s ancestors’ culture, traditions and wisdom. The initial idea for the book stemmed from Marcia Adams, a historian from Delaware, who recorded and transcribed some stories from Quiet Thunder.

After beginning the project, Adams was called to other commitments, so Vizzi continued recording the chief’s stories.

“I believe there was a story that had to be told, so I took on the project,” Vizzi said. “I give [Adams] much credit for starting the project and setting the tone that it would be in the chief’s own words.”

Chapter by chapter, Vizzi read passages that told the story of Quiet Thunder’s life from childhood to present day and how the teachings of his tribe translated into becoming a teacher himself. Vizzi emphasized the importance of the spoken word in Lenape culture.

“Chief Quiet Thunder carried the beliefs and wisdom of his ancient ancestors,” Vizzi said. “You will not get this kind of information from a history book. It comes directly from the oral history of the chief’s family and tribe.”

Vincent Gilbert, the son of Quiet Thunder, thanked all the speakers of the event for helping continue his father’s story.

“We are proud of our father and his accomplishments in teaching our history dating back to the ‘80s,” Gilbert said. “Our father knew that from an early day that it was important to educate people well beyond what they may have read in a book or seen on TV. We appreciate this opportunity and all the love that has been shared and hope that dad’s teachings will not go in vain.”

Quiet Thunder passed on peacefully at home in the company of his close family on the morning of November 13, 2020. He will be missed by the thousands of people he touched with his presence and wisdom as a cultural educator.