The rise of resale fashion: Why students made the shift to thrift shopping 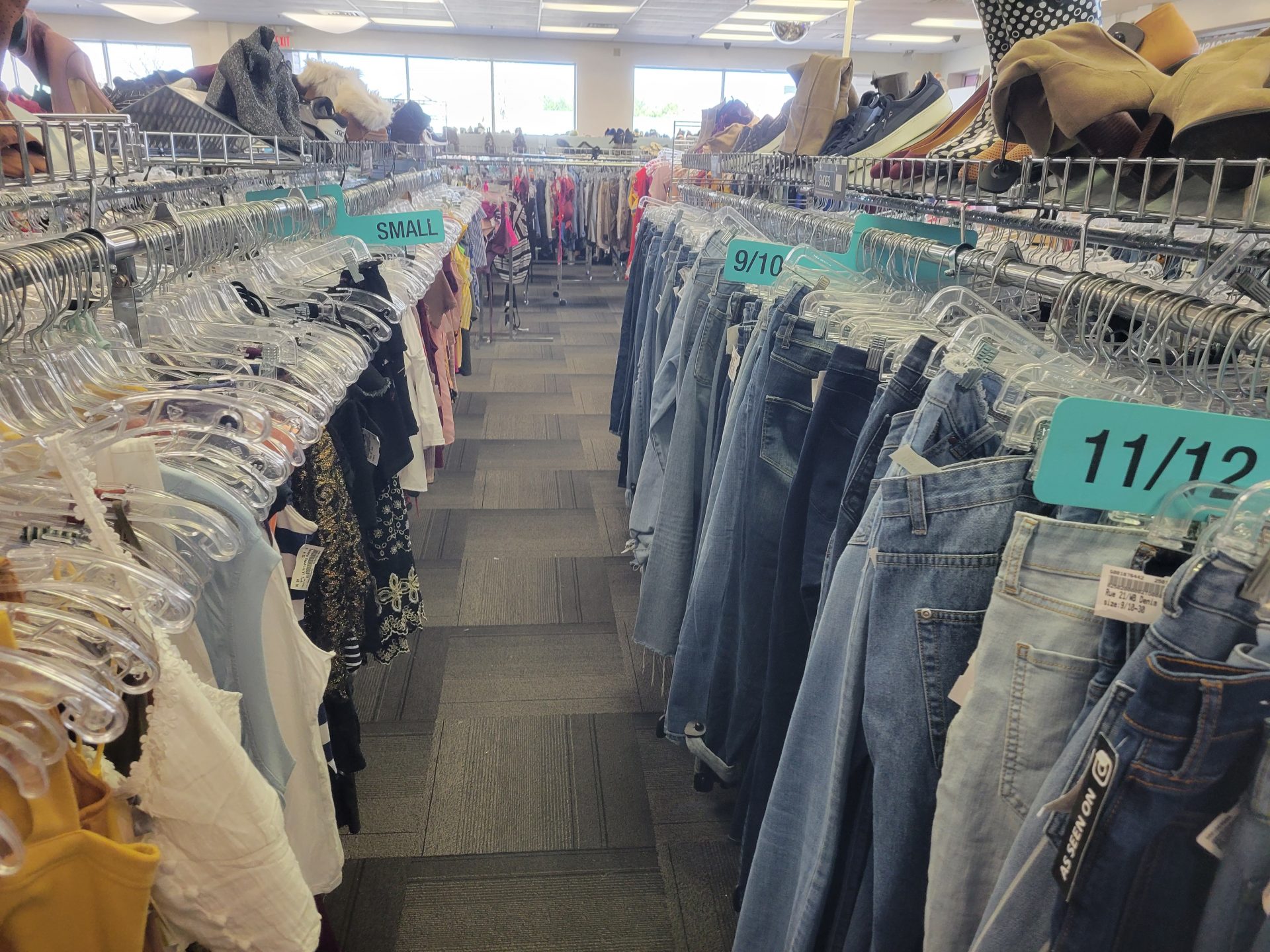 Laura Matusheski/THE REVIEW
Plato’s Closet and Goodwill are both located in the heart of Newark.

Laura Matusheski/THE REVIEW
Plato’s Closet has a lot of variety in their selection of clothing and sizing, similarly to an online store.

Laura Matusheski/THE REVIEW
Plato's Closet organizes their on-the-rack clothing items by type and by color, which may be more aesthetically pleasing to young consumers.

Laura Matusheski/THE REVIEW
“I think Plato's does a pretty good job making things more appealing,” Paige Lippman says. “But they're a lot pickier with the clothes that will take and not take.”

Laura Matusheski/THE REVIEW
As well as TikTok, Plato’s Closet in Newark also has an Instagram page that features trendy and inexpensive clothing items.

Laura Matusheski/THE REVIEW
Lippman speaks on the assortment of donated items that Goodwill offers: “I tell people not to be afraid to go there with a project in mind, because in a way it's also like a craft store.”

Laura Matusheski/THE REVIEW
To clear out old stock, Goodwill rotates colored tags and discounts certain colored items for the week to mark new inventory that comes in the store.

Laura Matusheski/THE REVIEW
Dr. Huantian Cao says that an environmental benefit may be a reason why people both buy and donate their clothes: “Yes, it will reduce the environmental impact, [and] some of the consumers may have this in mind.”

For junior political science major Paige Lippman, thrift shopping doesn’t simply bring back memories of the hit Macklemore song that rose to national acclaim nearly a decade ago. For Lippman, thrifting is a regular hobby, something she considers part of her identity and even a way of life.

Lippman, who has a minor in social entrepreneurship, began thrift shopping four years ago and now sells secondhand staples from her closet to university students on her Instagram page, Blue Hen Thrift.

From vintage graphic tees to trendy designer jeans, Lippman resells each item at around $10 to bring college students clothes “right to them” at an affordable price.

“I’m able to keep my prices so low [because] I actually try to post my things pretty comparable to Plato’s Closet,” she says. “They’re almost [targeting] the same demographic that I am, which is college students, teenagers and people just trying to get affordable clothes.”

Since the pandemic began, the fashion industry has taken a hit. Retail giants have filed for bankruptcy, independent brands have closed and brick-and-mortar stores, if they haven’t shut their doors, are still financially recovering from the months they were forced to stay closed during the lockdown. One of the few areas that has seen growth during this time, though, is the resale industry.

Online consignment platforms and secondhand retailers had already been seeing promising signs in recent times. Over the past three years, reselling and thrifting has grown 21 times faster than the actual retail apparel market, which means that there are more secondhand shoppers than ever before.

The pandemic has not slowed this growth.

Fashion resale might seem like an unlikely industry to flourish during a global pandemic. Yet ThredUp, an online consignment and thrift store, reported that their shoppers spent 2.2 million hours on their website in a single month in 2020, which is up 31% from before lockdown.

Add to that the predicted growth of the global secondhand market by 15 to 20% annually over the next five years, and it’s clear that the sector is thriving like never before.

Starting up her online store in the beginning of this year, Lippman hopped on the pandemic resale wave.

“It doesn’t really feel like work,” she says. “It’s just a hobby that I’ve always been interested in. Now I can spread that wealth and bring it to other people as well.”

Some of that, of course, has to do with the pandemic putting a stop to in-person shopping. As physical stores were forced to close back in March and consumers ordered to stay home, shoppers used the extra time to scour the internet for new items.

“Especially with websites like ThredUp, you can find a lot more [clothes],”says Megan Wolfe, a university graduate student in fashion and apparel studies. “It’s kind of like a needle in the haystack at an actual thrift store.”

Still, there are other signs that prove that the spike in secondhand sales isn’t just as a result of the pandemic. Back in the day, before the rise of eCommerce, the Industrial Revolution made it easier to make new clothes at lower prices, resulting in people replacing their items for new ones at fast rates and donating their old things. However, there was still a public perception that old discarded clothing was viewed as junk and not fit to be sold to the public, except for helping those considered to be the poorest.

The resale of secondhand clothing was made more appealing by promoting it as a good cause. Goodwill Industries and the Salvation Army both advertised their enterprises as promoting social well-being. In addition to collecting and distributing donated goods, both Goodwill and the Salvation Army used the profits from the resale of salvaged goods to create social programs.

Dr. Huantian Cao, professor and director of graduate studies in the fashion and apparel studies department, says that thrift stores continue to make important contributions to the community.

“To provide a low price product for the consumers in the region is one mission but also the most important mission is to receive the most donated product and make a profit from that,” he says. “[Thrift stores] use the money to provide [career] training for the local communities. That is the most important contribution of Goodwill.”

Plato’s Closet, similarly to Goodwill, is a chain retailer that buys and sells trendy second hand clothing for teens and young adults. To keep up with the fast-paced, online fashion world where second hand shopping is headed, the Newark store has shifted their presence on social media. Amassing more than 2,000 followers on Instagram, the store has recently made a TikTok account.

But what else is prompting this shift to thrift, especially online?

“I think like the three principles I kind of go off of are convenience, sustainability and affordability.” says Lippman. “I think those of the great things that college kids are very, very appealing to them.”

Environmental sustainability may be a leading factor, as many consumers have already taken to shopping secondhand for sustainable reasons long before 2020. Today’s generations, like Gen Z and millennials, are interested in helping the environment and reducing waste. Studies have found that 77% percent of millennials prefer to buy clothing that helps the environment.

Wolfe, who is a co-founder of the sustainable fashion club at the university, finds that thrifting is one of the most sustainable ways to shop.

“You don’t have to use any resources to make it,” she says. “It’s already been made, and then you’re kind of like giving it a second life so it doesn’t require any use of [additional] resources.”

Then there’s the fact that secondhand is typically cheaper. And with the pandemic resulting in millions of people losing their jobs, this is no small factor. According to ThredUp’s report, 82% of people have or are open to shopping secondhand when money gets tighter.

One of the ways that one can turn something old into something new is through repurposing or upcycling their clothes with fabric dye, a sewing kit and creative ingenuity.

“You get a more interesting piece out of [repurposing]” Lippman says. “But also, you make something that other people see as garbage and turn it into something wearable again.”

As the thrift market doesn’t seem to be slowing down anytime soon, Lippman hopes she can continue to make a positive impact.

“If I can’t do it on a large level, at least I know I can do it on a personal level.”