University Wind Ensemble to travel to Prague this summer 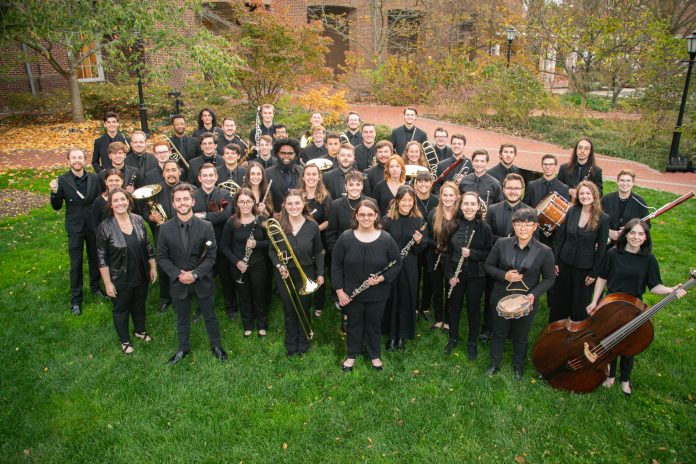 As pandemic related travel restrictions continue to be reduced, the university’s Wind Ensemble has been focused on preparing to travel abroad.

The Wind Ensemble has been invited to perform at the World Association for Symphonic Bands and Ensembles (WASBE) Conference in Prague, Czech Republic, this summer. The WASBE conference is a festival of symphonic wind music and will be held at the Žofín Palace.

The conference biennially invites performers and experts from all over the world and has been running in various countries for the last 40 years. In addition to hosting performances, the conference will hold lectures, workshops and seminars. There will also be an exhibition of music producers, publishers and conductors from around the world.

The ensemble is made up of 49 students and five faculty members. It will leave on July 17 and return on July 24. Lauren Reynolds, university professor and Wind Ensemble conductor, explained the various parts of the application process.

“Bands from all over the world can apply,” Reynolds said. “You submit recordings, and they’re judged blindly, so the panel of people who listen to them don’t know who they’re listening to, and then they select performing ensembles from those. Then you get invited to go and play. So it’s a really big deal and really exciting deal that we’re invited to go at all.”

This year’s conference will celebrate 101 years since the birth of Karel Husa, an influential composer of symphonic wind music. The conference will take place from July 19-23 and the university will perform on July 21.

“The whole conference is sort of in his honor,” Reynolds said. “So each group that’s performing is performing at least one piece. The piece of his that we’re performing is called ‘Alfresco.’”

The ensemble has prepared two separate programs of music, one for the conference and another for their outdoor performances. The ensemble will be participating in a “fringe festival,” a series of outdoor concerts that will take place throughout the city. Their first performance will occur at Wallenstein Garden. During these outdoor performances, the ensemble will play a newly transcribed piece called “Eight Check Duets.” This piece is derived from a French élégie, a piece of music or poetry written to mourn a loss, composed by Husa.

“I have transcribed and arranged the élégie movement that we’re going to be playing for Chamber Wind [ensemble], a small group of players from within our band,” Reynolds said. “We got permission from the Husa family and also from the publisher who holds the rights to that. So that’s going to be a really exciting premiere performance.”

The ensemble will be performing various other pieces of music including Czech and American pieces.

“There’s such a variety of sound worlds created by this whole program,” Gage Kroljic, a second year masters student studying percussion performance, said. “I think some of my personal favorite highlights would be ‘Come Sunday’ by Omar Thomas.”

Kroljic described “Come Sunday” as a piece containing gospel-inspired sounds, which creates a large sound within the small ensemble. “Come Sunday” serves as a  juxtaposition to another one of his favorites called “soniChroma” written by university percussion professor Gene Koshinski. “soniChroma” is a more contemporary work that contrasts with “Come Sunday,” which, according to Kroljic, helps to create a unique program.

Their performance days will operate on a rotating schedule where they will have every other day off from playing, giving the students and faculty plenty of time to explore Prague and other surrounding areas.

“I’m very interested in history, so I really hope to see some historical sites or monuments or look at some castles that are there and just kind of travel around,” Gwen Ryan, a junior instrumental music education major, said. “[I’m excited to] just like kind of take in the settings, take in the culture, visit local coffee shops and see if it’s at all similar to the U.S.”

However, in order to enter Prague, students must be fully vaccinated or provide negative COVID-19 test results obtained at most 72 hours prior. According to Reynolds, Prague also has strict mask mandates that state that to enter any building a person must be wearing a KN95 mask or better. Reynolds recently traveled to Prague to inspect the hotel and venues.

“I have to say my anxiety levels were a little bit high going in, but it’s actually a lot tighter there,” Reynolds said. “There are a lot more restrictions, which I think is good for us as far as the safety of our students.”

The recent invasion of Ukraine has currently not had any impact on the trip to Prague.

“I’m not really [worried] for the issue with Ukraine,” Ryan said. “I fully believe that the university will take steps to either delay or make sure we’re going to be safe while we’re over there, and they’ll make a decision of whether that’s something we need to be worried about.”

The Wind Ensemble will also be performing the conference program on Friday, May 6, at 8 p.m. in the Puglisi Orchestra Hall in the Roselle Center for the Arts.

In the meantime, the ensemble continues to have occasional rehearsals that will become more frequent as they approach their concert on May 6. For now, ensemble members have received the majority of their music and are mainly practicing independently.

Share
Facebook
Twitter
Pinterest
WhatsApp
Previous article“You deal with it, or it will deal with you:” The original host of “Blue’s Clues” discusses mental health with university students
Next articleLike father, like son: Jameer Nelson Jr. takes his basketball career one step at a time