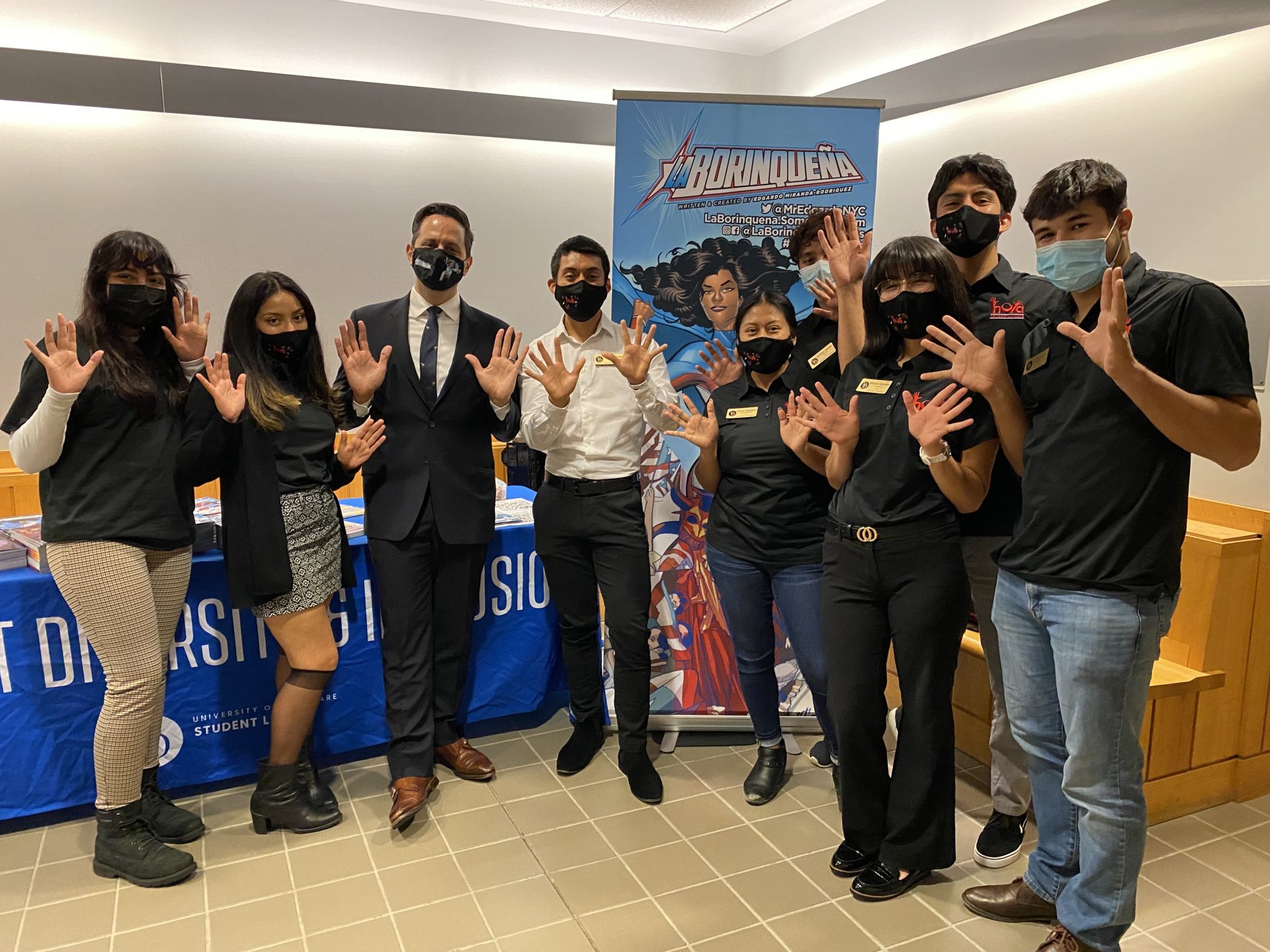 On Wednesday, Oct. 20, in the Trabant Theatre, the annual Voces de la Gente event was hosted by Student Diversity & Inclusion, the Office of Institutional Equity, Diversity and Inclusion, the Latino/Hispanic Heritage Caucus and HOLA. The event was also streamed with UD Capture. The event’s highlighted keynote speaker was Edgardo Miranda-Rodriguez, a graphic novelist and philanthropist from New York City.

Natalia Davila, board member of the Latino/Hispanic Heritage Caucus, and Johnny Perez-Gonzalez, a senior media communications major and president of HOLA, were hosts for the event. They started off by highlighting the importance of Latinx Heritage Month, as well as their personal experiences of being Latinx on a college campus where they felt difficulty fitting in with their non-Latinx peers. Stephanie Chang, director of Student Diversity and Inclusion, also spoke and echoed the sentiments of the students.

Davila and Perez-Gonzalez then presented several Latinx Hispanic Heritage Impact Awards on behalf of the Latino/Hispanic Heritage Caucus. These awards honor and recognize the “outstanding achievements and contributions of individuals to the advancement of Latinos in higher education and in the greater community.” They presented awards from years past that could not be properly given due to COVID-19, as well as the awards for this year.

After the opening ceremonies, keynote speaker Edgardo Miranda-Rodriguez came on stage to speak. Miranda-Rodriguez first discussed the history of Puerto Rico and the humanitarian issues it has faced and continues to face.

Miranda-Rodriguez went on to speak about “La Borinqueña,” the graphic novel he created to bring awareness to the important issues that Puerto Rico faces as well as to promote representation for the diverse identities of Latinx people. La Borinqueña, the graphic novel’s main character, is really named Marisol Rios De La Luz, and when Miranda-Rodriguez created her, he strived to make a character that showed the diversity and achievement of Latina women in the real world.

“Marisol Rios De La Luz would be an undergraduate student, would be an Afro-Puerto Rican, would be a STEAM — science, technology, engineering, arts, and math — student,” Miranda-Rodriguez said. “I actually made her that because according to a Pew Research study, there has been a growing trend in the United States of Latinas embracing STEAM unlike any other group across the United States. So I wanted to create a character that was reflective of a real positive trend here in our country.”

“Oftentimes in books, women always have to be attached in one way or another in a relationship, but men are always written to be free, to explore and to be adventurous,” Miranda-Rodriguez said. “I wanted La Borinqueña to have that liberty, that independence. And so in the first book, the climactic scene is her dealing with a blackout that came as a result of a storm, a massive storm.”

Even though Miranda-Rodriguez has been independently publishing his graphic novel through his company, Somos Arte, his work has still gained significant popularity. The graphic novel has even received national recognition: a copy of an edition of “La Borinqueña” is in a permanent collection featured at the Smithsonian National Museum of Natural History.

For Miranda-Rodriguez, a big part of creating “La Borinqueña” was bringing awareness to social justice issues that were important to him. He explained that he and the team behind “La Borinqueña” used the image and popularity of “La Borinqueña” to encourage Latinx voters to vote in the most recent presidential election.

After answering some questions regarding his personal life and his graphic novel series, Miranda-Rodriguez addressed which projects he plans to work on next. Miranda-Rodriguez said that he is teaming up with the National Resources Defense Council to release the next edition of “La Borinqueña” on Earth Day, working on releasing action figures for “La Borinqueña,” planning more art exhibitions and coming to more universities to have conversations about Puerto Rico and “La Borinqueña.”

After Miranda-Rodriguez was done taking questions, the event concluded and audience members were able to purchase comic books and “La Borinqueña” merchandise from the author as well as get their copies signed. When asked for a message he wanted to give to Latinx students on campus who feel as though they don’t fit in, Miranda-Rodriguez expressed support.

“It’s important to find spaces in your community on campus that validate and affirm you, your culture, your heritage,” Miranda-Rodriguez said. “Organizations like HOLA are an excellent example because they not only support one another as Latino students, but they produce events. As an undergraduate student, you’re going to often find more community in extracurricular activities than in the actual courses that you’re studying.”