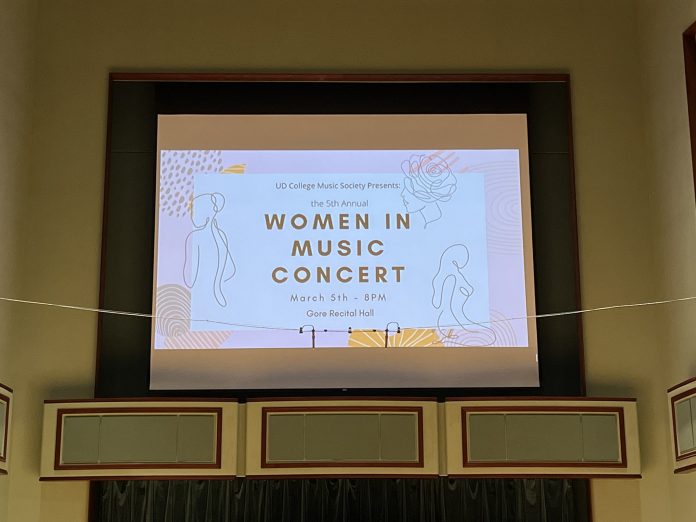 In 2021 a study done by Donne reported that out of 14,747 compositions performed by 100 international orchestras in the 2020-2021 performance season, only 5% of those compositions were written by women. This statistic was shared by Leah Michael, a senior percussion performance major and president of the College Music Society, at the beginning of the Women in Music Concert that took place on March 5 in Gore Recital Hall. This event solely featured pieces by female composers to honor them and promote diversity in the orchestral industry.

The College Music Society is a national organization that strives to bring together different musical disciplines, such as vocal performance and instrumental performance, into one group that can collaborate and hold events together. The university’s chapter has been somewhat dormant due to COVID-19 and during mostly-virtual semesters was only able to hold interest meetings online. However, the RSO is hoping to hold more events and mixers now that university COVID-19 restrictions are loosening.

Michael explained that the Women in Music Concert is an annual event put on by the College Music Society as well as describing the importance of and reasoning for holding this event.

“It’s just to push [women composers] to the forefront and encourage the ensemble directors and people in the music department [School of Music] to program more works by women or underrepresented composers,” Michael said.

One out of the event’s many performers was Associate Professor of Voice and Opera Blake Smith. Smith performed two pieces, the first one being “Promesa a la Virgen de Los Remedios” by Edna Alejandra Longoria. Longoria is a composer currently working with Assistant Professor of Music Noel Archambeault for The Chicana Art Song Project. Archambeault started this project to highlight pieces composed by Chicana women and their lived experiences.

Smith is the editor of The Chicana Art Song Project and expressed his honor to perform this song in the recital.

“Personally as somebody who just does not identify as Chicano or Latinx at all I was kind of hesitant to be part of that,” Smith said. “But I was delighted to know that both the composer, Edna Alejandra Longoria, and the creator of the project, Dr. Archambeault, are actually quite anxious to have people who are not of that same sort of tradition and those same lived experiences to share the sort of historical nuances and things that are part of that. So I feel very fortunate to be able to be part of that.”

Many students were also performers in this recital, including Julianne Leddy, a second year master’s student in vocal performance. Leddy sang a musical-theater style song called “Man of Stone,” which was composed by another university student, Tess Edwards.

Edwards, a junior music composition major, explained that her song is from a musical she is writing called “Michelangelo” about the famous Renaissance sculptor and painter. Edwards expressed that she looks forward to continuing to compose musical-theater style pieces, and she thinks “it’s a wonderful storytelling technique.”

Leddy noted that although she has spent many years in the music program at the university, this is her first time performing in this annual concert. She likewise stressed that this recital holds an especially great significance.

One student who attended, Josephine Moran, a senior linguistics major, explained that she is a musician and music teacher herself and is also currently taking a women in music class. She shared her thoughts that “women are historically underrepresented in the canon,” and she was therefore very interested in seeing compositions by women composers in action.

While this recital is just one way of promoting female composers, Edwards believes that events like these are very significant and inspiring.

“I feel proud of what we’ve done,” Edwards said. “I think that it speaks to our community that we’re all coming together tonight to celebrate women. And I’m looking at the people of different backgrounds that are, you know, performing tonight. And I just think it’s so cool that we’re all kind of here in this moment and trying to support women.”