For professional sports, life in the bubble may be the answer 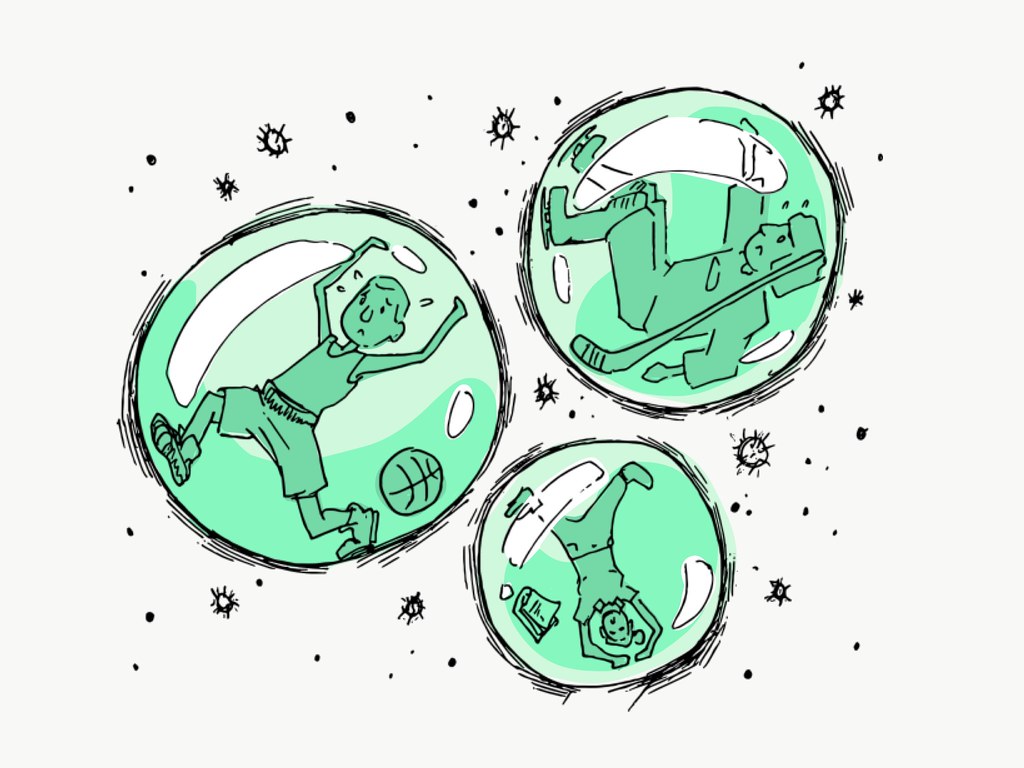 Sam Ford/THE
REVIEW
In the age of coronavirus, sports bubbles have become the way to keep players and staff healthy.

Professional sports was one of many major American norms stripped away by the coronavirus pandemic. Their return is a small victory for many, although the games will come with numerous new obstacles.

The NBA resumed play at the Walt Disney World campus, a very effective bubble setting. There have been zero positive COVID-19 cases dating back to before July 29th, and only a few minor hiccups along the way involving players leaving the Disney campus and returning, only to be required to quarantine for 48 hours after.

The WNBA has resumed play at the IMG Academy campus in Bradenton, Florida and similar to the NBA, have maintained no new COVID-19 cases.

The NHL has returned with two “hub” cities—Edmontonand Toronto– each city acting as its own bubble for its Eastern and Western conference teams. Each team gets its own hotel floor for all players and staff to limit contact with others, as well as having league approved designated areas for players to go if they decide they want to leave their floor.

Unlike the aforementioned professional leagues, the MLBand NFL have struggled to balance the potential of a COVID-19 outbreak.

The MLB has handled COVID-19 scares since the season returned, seeing teams such as the Miami Marlins, Philadelphia Phillies, New York Mets, St. Louis Cardinals and the Cincinnati Reds all manage positive cases, some in larger quantities than others. However, according to the MLB and the Players Association, out of the 12,301 COVID tests administered, there have only been 4 new cases since August 14th.

The MLB has dealt with these COVID-19 outbreaks effectively, learning from their mistakes as the season goes on. The protocols for baseball have been primarily focused on limiting contact as much as possible and constantly changing the baseballs in the field of play. When a positive case arises, players and staff are required to quarantine. MLB subjects the players and staff to contact tracing, which is a way for the league to see who was in contact with the person who tested positive for COVID-19.

One of the teams affected by an outbreak was the Cincinnati Reds, who had two unnamed players test positive for COVID-19.

Red’s pitcher, Trevor Bauer, gave a glimpse of what the process was like for the team amidst these positive cases on his vlog earlier this week.

“I was a high-risk encounter, meaning I gave the player a high five at some point, so I’ve now been informed that I have to stay away from people.”

Bauer was required to quarantine for two days after he was deemed as a high-risk encounter, but he explained that he hadn’t been told to quarantine until after that period.

“I don’t think MLB knows how I’m supposed to do that either, given they’re just making this up as they go,” Bauer said.

The NFL may need to rely on a system like the MLB’s when maneuvering an outbreak, a system that would include limiting contact as well as contact tracing.

The NFL has had the benefit of seeing sports leagues across the country deal with the struggles of returning to play during the COVID-19 pandemic. How an outbreak will be handled on a team with over 75 people including players and staff, however, remains to be seen.