“A dominant false narrative”: the Native American Student Alliance’s work to reframe the past 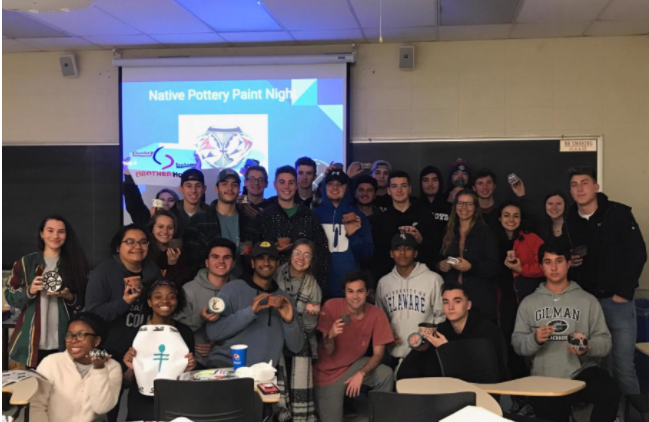 Jonté Desiré’s Native American history lessons discussed reservations, the Trail of Tears and that Natives and their culture were extinct.

“That can’t be the case because odds are if you’re taught Black history as well as Native history wrong, there’s a lot more that isn’t being said or mentioned, and there’s a dominant narrative,” Desiré, a junior neuroscience and biological sciences double major, said. “There’s a dominant false narrative that’s being projected in its place. So, I did some more research into it, and there’s so much history here that’s not being discussed.”

Desiré wanted to bring her newfound awareness to other people at the university as well as educating herself and amplifying Native American voices.

In Oct. 2020, she founded and became the president of the Native American Student Alliance (N-A-S-A), a registered student organization (RSO) dedicated to Native American advocacy work.

“The Native American Student Alliance learns aspects of Native history that aren’t usually talked about in a historically correct manner,” Desiré said. “A lot of our resources, we get from Native sources.”

One such event was a lecture from a guest speaker, Karelle Hall of the Nanticoke Tribe. Hall talked about Native language revitalization and cultural appropriation versus appreciation.

There were also two separate Native pottery events, one where people learned about and created Pueblo pottery and another where they painted them.

“We had a pretty big turnout for that,” Desiré said. “We had five people RSVP, but 30 or 35 showed up. We were only short one pot, surprisingly.”

Desiré also planned a talk with another Nanticoke member but had to cancel the event due to the pandemic striking a few months later.

The amount of advocacy work and education that Desiré and N-A-S-A do is vast, particularly focusing on underreported events and history.

Desiré said she never knew about the Missing and Murdered Indigenous Women (MMIW) crisis until getting more involved in her research and activism.

MMIW is the name given to an ongoing crisis where Native women in the United States and Canada are frequently targeted, assaulted and killed.

“Federal statistics report the murder rate of American Indian women on some reservations is more than ten times the national average,” the NIWRC said in a statement on its website. “Domestic violence, sexual assault, and sex trafficking are the causes of many of these disappearances and murders.”

The NIWRC, as well as many other similar organizations, are outraged that Congress has continually failed to pass any legislation regarding MMIW.

In a press release from 2019, the NIWRC said that while creating a national awareness day and a task force were a good start, it said that “these actions represent an acknowledgment of the crisis but more is needed at a foundational level.”

N-A-S-A also held a movie night where the organization played the Netflix film “Indian Horse,” which focuses on the controversial and dark story of Native American boarding schools.

The Carlisle Indian Industrial School in Carlisle, Pennsylvania was the first of many such schools. It was created under the “kill the Indian, save the man” mentality, which was made famous from a speech by Richard Henry Pratt, the American general who founded Carlisle.

In an article for History.com, Becky Little, a journalist from Washington, D.C., states that Carlisle’s function was to “forcibly assimilate” Native Americans into American culture. Carlisle operated from 1879 until 1918.

“As part of this federal push for assimilation, boarding schools forbid Native American children from using their own languages and names, as well as from practicing their religion and culture,” Little wrote in the article. “They were given new Anglo-American names, clothes, and haircuts, and told they must abandon their way of life because it was inferior to white people’s.”

In a statement on its website, Dickinson said that Carlisle’s cemetery opened in January of 1880, “four months after the opening of the school.” Two recently deceased students were interred on the school campus.

“Between 1880 and 1918, at least 186 individuals were interred in this burial ground,” Dickinson said in the statement. “These interments included Carlisle Indian School students, prisoners of war held captive at the school, and the child of an Indian School teacher. These graves were marked with a combination of wooden and stone grave-markers.”

As stated by WHYY, anthropologists attribute many of the deaths to “disease and harsh conditions.”

According to Dickinson, starting in the summer of 2017, the remains were exhumed and repatriated at the request of descendants and families. This process is still ongoing.

Desiré said that the event went well and they had “a very good discussion” about the issues presented in the film.

“That was people’s first time hearing about boarding schools like that,” Desiré said. “When you first think of boarding schools, you think of really rich, preppy, like Charter 2.0. I didn’t know that kind of school existed.”

Desiré also has a minor in anthropology because of her interest in Black and Native history.

As Desiré looked for Native studies courses, she discovered that some of the courses either no longer existed or are only offered during certain semesters, compared to other history and culture courses.

“Personally, I don’t really see that much of an effort from [the university] to increase accurate depictions of Native people or Native history,” Desiré said. “I noticed that the school has a couple of land acknowledgements now, but a couple that I saw, they didn’t mention the Nanticoke tribe — there’s two tribes in Delaware. Or, the information on their land acknowledgement isn’t accurate, or they only have history on one tribe rather than the other. I think the school could definitely do more to change the dominant narrative of Native history.”

According to a map posted on the university’s Center for Counseling & Student Development’s website, the Lenape territory spans Northern Delaware, all of New Jersey, Eastern Pennsylvania and some parts of New York and Connecticut. The Nanticoke are the smaller of the two tribes, spanning a small area between Delaware and Maryland.

Desiré recalled that when she walked through the Trabant and Perkins Student Centers, she saw several pictures of Native people hanging on the walls. They mostly depicted historical figures such as Sitting Bull and Geronimo.

However, Desiré asserted that in the 21st century, Native Americans continue to make history.

As reported by Variety, in Oct. 2019, Wes Studi, a Cherokee actor, best known for starring in films such as “Dances With Wolves” and “Geronimo: An American Legend,” became the first Native American to win an Academy Award.

On March 15, 2021, NPR reported that former New Mexico Representative Deb Haaland was confirmed as the United States’ Secretary of the Interior, making her the first Native American to serve in the Cabinet.

“There’s a lot more Native people in Congress now, there’s lots more people besides the same people that are commonly highlighted and continually highlighted from so long ago,” Desiré said. “That’s the only narrative that you hear, and in my opinion, just perpetuates stereotypes of Native history.”