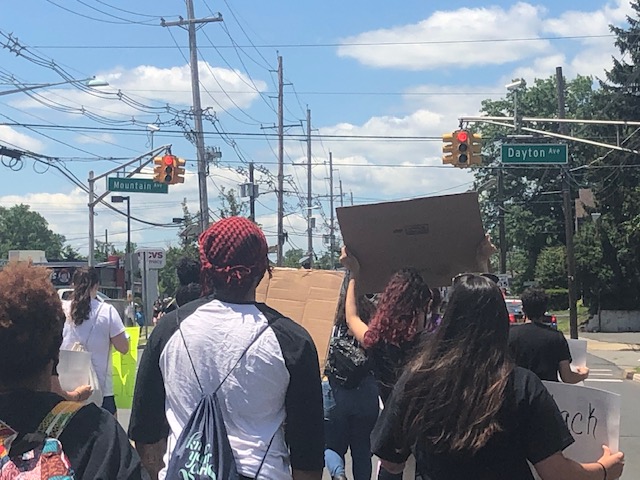 MIDDLESEX, N.J. — Middlesex is a small, quiet town in central New Jersey, with a population of about 13,000 residents. Among its amenities are a library, a strip mall, a Wendy’s and a small lake, where ducks and geese frequently swim around.

However, June 7 was far from quiet. More than 200 people gathered at Mountain View Park, near Middlesex High School, for a Black Lives Matter (BLM) protest in honor of George Floyd and Breonna Taylor.

On March 13, police officers fatally shot Taylor, a black emergency medical technician in her home in Louisville. According to her relatives and lawyer, the police allegedly did not identify themselves and forced their way in. Taylor’s boyfriend mistook the police for intruders and gunfire erupted. The police were searching for two individuals who were already in custody.

On May 25, Derek Chauvin, a white Minneapolis police officer, allegedly murdered Floyd as he knelt on Floyd’s neck for almost nine minutes. Floyd repeatedly told the officers, “I can’t breathe.” Chauvin was recently charged with second-degree felony murder, previously having been charged with third-degree murder and manslaughter. The other three officers, J. Alexander Kueng, Thomas Lane and Tou Thao were charged with aiding and abetting second-degree felony murder.

Although violence has erupted in some of the protests in major cities, most remain peaceful. The BLM protest in Middlesex was no exception. 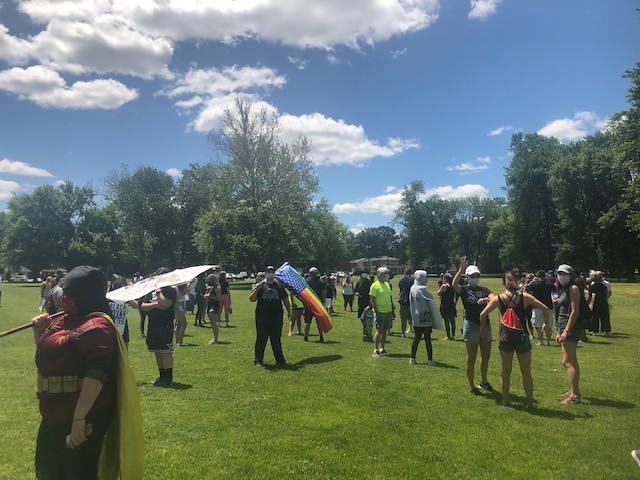 Before and after the protest there was a table set up with voter registration forms. A few dozen people went over to register.

The protest began at 12 p.m. and opened up with all the protesters kneeling for eight minutes and 46 seconds of silence in honor of Floyd. The silence was only broken by the howling wind and chirping birds.

The hour-long route started from Mountain View Park and ran down Union Avenue, the section of U.S. Route 28 that runs right through Middlesex, then onto Marlborough Avenue, Harris Avenue, Drake Avenue and down Mountain Avenue before heading back to the park. A single police car led the group.

Protesters chanted various phrases such as “Police brutality has got to go,” “Say his/her name” and “I can’t breathe.” One of the protesters shouted “F–k the police” once before immediately silencing himself upon realizing others were glaring at him.

As the protesters walked down Marlborough Avenue, a police officer parked on a side street and recorded the march from his driver’s side window. One protester carried a sign reading “Don’t Trust Cops” accompanied by a well-drawn Sailor Moon, the titular character of a popular Japanese manga. 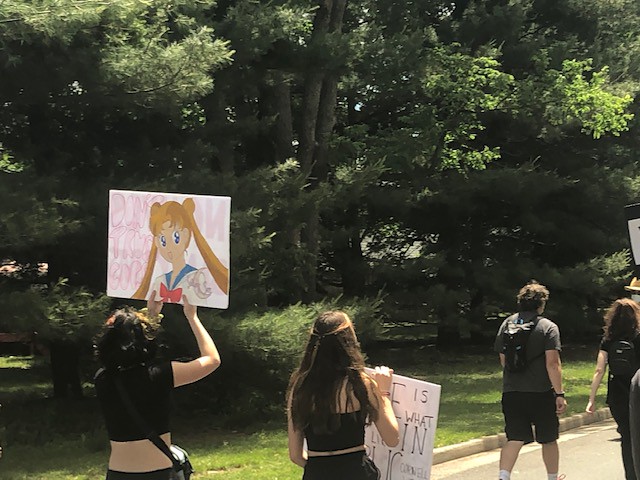 Mountain Avenue is the location of many of Middlesex’s municipal buildings. As the protesters reached the Middlesex Police Department, they abruptly stopped in front of it. A woman got on the radio and told everybody to sing “Happy Birthday” in honor of Taylor, who would have turned 27 on June 5.

“I feel like our little town has a lot more supporters that were kind of the quiet majority, so I wanted to show support,” Johnson said. “Change always starts at local level.”

Johnson supports the Middlesex Police Department and “as a white woman” she has not had any bad experiences with them.

“But you know, systemic changes need to happen, starting with the local police,” Johnson said.

Johnson said that both the killings of Floyd and Taylor made her feel “very upset,” and she felt inspired to speak out and “do what’s right.” She said that people do not have to march, but they can do other things such as signing petitions, donating money to good causes and buying products from black-owned businesses.

“So, you know … I think there are lots of ways to show your support for something that makes you upset, whatever that may be,” Johnson said.

Jerremiah Garcia, 16, a sophomore at Middlesex High School, attended the protest and said that he “didn’t know it was going to get this bad.”

“First, it was COVID out of nowhere,” Garcia said. “Racism has been bad before, but this year … I guess the cops got way more corrupt … but this is really bad.”

Garcia said that he wants to see “all lives matter,” but Black Lives Matter needs to happen first. He said that black people are the ones who are “currently the most oppressed” and that they are not heard as much as they should be.

Garcia said that the movement hits close to home because he has a lot of friends who are black or live in the cities where violence and looting occur. He said that one of his friends’ family had their sneaker store looted.

“It doesn’t matter if we’re violent or loud enough,” Garcia said. “But we’re not heard by the people that are needed to share this information.

Garcia believes that a small town can still matter on a national level.

“Although it’s our small little town, we can still give this information out and help people see what’s currently wrong,” Garcia said. 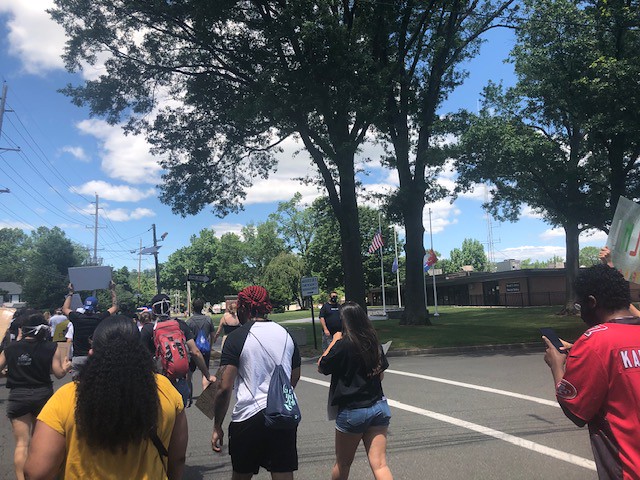 ​​Eric Munson​/THE REVIEW
​Protesters in Middlesex, NJ took to the streets on June 7.​

Banu Mahalingam, 48, a cardiologist from Princeton, New Jersey, drove to Middlesex for the protest. She said that the protests hit close to home for her because she is an Indian immigrant.

“I think every little drop adds to the whole ocean, so I think my physical presence here is really insignificant,” Mahalingam said.

Mahalingam believes that tolerance should be the main societal change that comes from the BLM movement. She said that there is a lot of “racial prejudice” still around and that she still faces it.

Shawn, 38, a construction worker, said that he felt the protest was “well needed.” He did not wish to disclose his last name.

“We’re all only here for a certain amount of time,” Shawn said. “There’s no reason why we should be fighting amongst each other.”

Shawn brought both his young son and his daughter to the protest for the educational aspect. 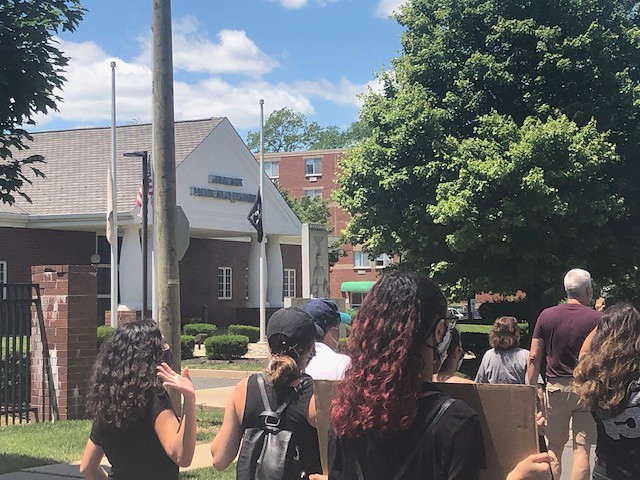 ​​Eric Munson/THE REVIEW
​Protesters in Middlesex, NJ walked down many streets of the small town, brandishing their BLM signs.​

Shawn said he hopes that he will be able to drive down the streets and not have to fear for his life. He said that every time he sees a cop car he gets nervous.

“Me and my son were pulled over and [my son] immediately started crying,” Shawn said.

Shawn said that he has friends and family in both the police force and the military. He said that their main job is “to protect and serve” and that nobody should feel nervous.

“I want my son to grow and live in peace, that’s all I want,” Shawn said. “But just seeing this here … it gives me a warmth in my heart. It makes me feel so much better.”

Johnson gave a short speech after the protest, thanking everybody for attending and not littering the town.

“There are many things you can do to support the cause, but one of the most important is to get out and vote!” Johnson shouted to applause and cheers.