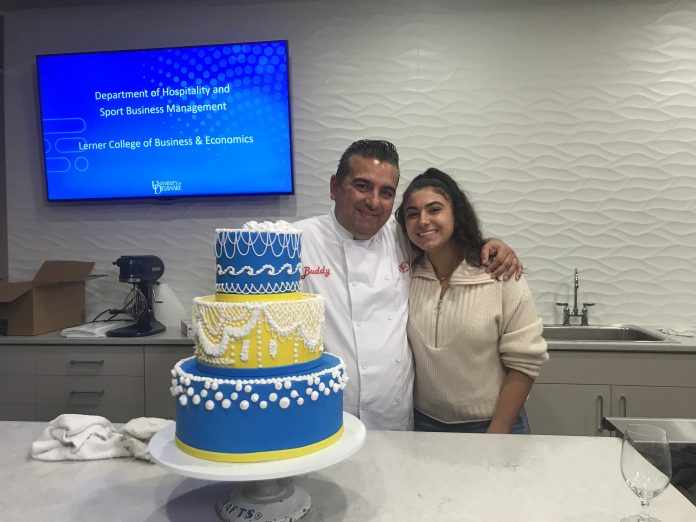 Sophia Johnson/THE REVIEW
Buddy Valastro takes questions from the audience as he decorates a cake.

Sophia Johnson/THE REVIEW
Lobster tail pastries from Buddy Valastro’s bakery, one of the hardest pastries to make according to Valastro, were passed out to guests.

Sophia Johnson/THE REVIEW
Cakes from Buddy Valastro’s bakery were passed out to guests at the event.

Sophia Johnson/THE REVIEW
Buddy Valastro hands a guest at the event a cannoli.

Sophia Johnson/THE REVIEW
Buddy Valastro and his daughter pose in front of the cake they decorated using various piping techniques.

TLC’s hit show “Cake Boss” has been on the air since 2009 and has amassed millions of viewers and fans. The show features Buddy Valastro, the “Cake Boss,” as he runs a bakery. Valastro has gained a reputation as a baker of extreme cakes with out-of-the-box designs.

Valastro recently made a visit to the university’s Vita Nova restaurant and gave a cake decorating demonstration while talking about experiences from his career and life. The event was hosted on Nov. 2 in the Vita Nova demo kitchen, and students in the hospitality business management major were invited to attend in person. The event was also streamed over Zoom.

Vita Nova is a completely student-run restaurant in Trabant Student Center. Hospitality business management students learn everything from washing dishes to ordering inventory and serving guests. Students also have the opportunity to use high-quality kitchen appliances to learn how to cook for a restuarant.

Throughout the event waiters at Vita Nova passed out goods from Valastro’s bakery, including lobster tail pastries and cake.

“I definitely want to try and go into the family business and even take over what my dad is doing,” Sofia Valastro said. “I mean, I’ve looked up to him, and he’s taught me a lot, but I could only learn so much hands-on, and I’m going to learn more here and put it all together.”

At the end of the event, Buddy Valastro and his daughter filled cannolis by hand for all in attendance.

Also attending the event to support her husband and daughter was Lisa Valastro, Buddy’s wife of 20 years. Sofia Valastro is their oldest daughter and therefore is the first one to head off to college.

“I love that Sofia’s here,” Lisa Valastro said. “I always knew she wanted to do something in the business, and I’m glad that she’s taken the next step to learn a little bit more about what it means to be in the business”

Deputy Dean of the Lerner College of Business and Economics and professor in the Department of Hospitality and Sport Business Management Sheryl Kline started off the event by welcoming all the students and introducing Buddy Valastro and Sofia Valastro. Buddy Valastro first expressed that he was happy to be at the university and then began to show how he decorates a cake with different piping techniques. Buddy Valastro commented that, to him, decorating cakes “is about feeling good and having fun” and that “it’s an escape.”

Throughout the event, Buddy Valastro shared many sentiments and stories about his career in making cakes and running a business. Buddy Valastro gave tips on overseeing a business and stressed how important it is to make a personal connection with your customers. He also expressed frustration at the fact that since he has become so famous, he does not get to make many personal connections with his clients, which he misses doing.

“I liked it better making cakes when people came in and knew me as Buddy,” Buddy Valastro said.

However, as Buddy Valastro received questions about his favorite cakes he’s made and how he comes up with designs for cakes, he expressed his passion for baking and running a business, saying that he “could never really see [himself] doing anything else.”

Buddy Valastro also gave the hospitality business management students advice on starting and running a business. He encouraged students to find their niche, love what they do and be prepared to make sacrifices for their business. He also discussed new innovations he thinks the next generation of business owners will make regarding restaurants and the hospitality industry.

“I think collectively you guys will think of what’s the next experiential thing,” Buddy Valastro said. “Find partners, find people who, who potentially you can do it together with, but, you know, nothing comes without hard work, determination and never giving it up. But this is the time where you guys could figure it out. And if you fall or you fail, well, it’s okay because you’re young.”