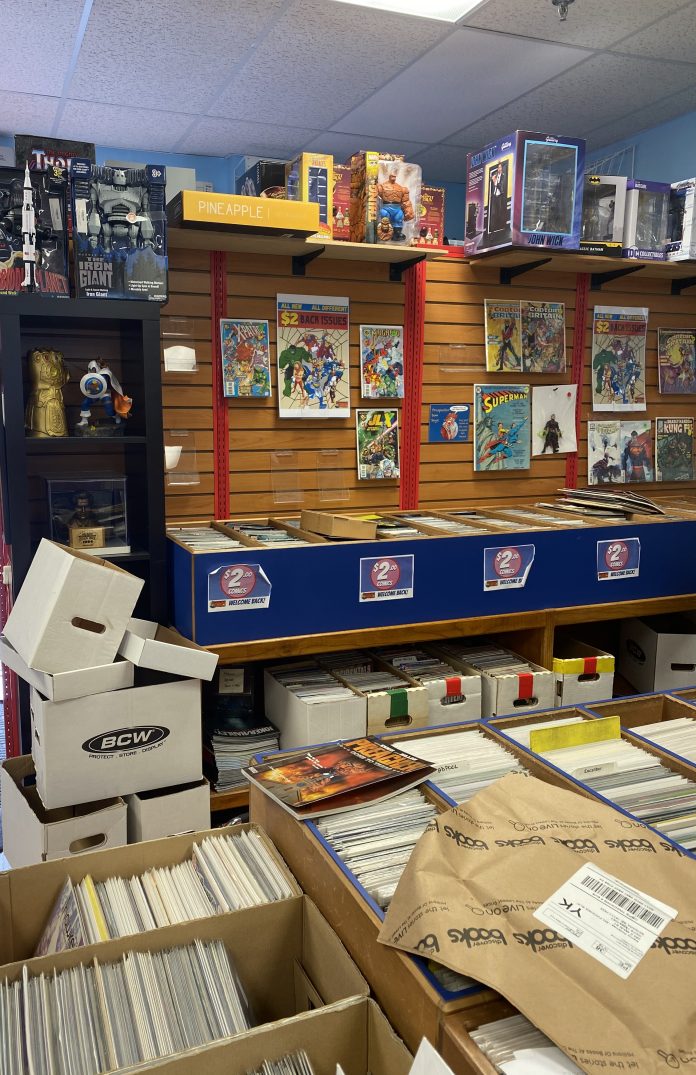 When last I spoke with Joe Murray, the longtime owner of Main Street fixture Captain Blue Hen Comics, we discussed how the store was doing (surprisingly good), a major shift in the industry’s distribution structure (unsurprisingly troubling) and how Captain Blue Hen expected to weather the years ahead in an ever-evolving state of things. Now, with another bombshell industry move announced by a leading publisher and the end of the pandemic (hopefully) in sight, Murray has more to say.

On March 25th, Marvel announced that they would be ending their exclusive deal with long-time distributor Diamond Comic Distributors, referred to as Diamond, and instead using Penguin Random House (PRH), perhaps most often associated with novels, for the distribution of comics, graphic novels and collections to the Direct Market, the industry term for comic book retailers like Captain Blue Hen.

The news was surprising — for the last 25 years, Diamond has enjoyed an effective monopoly over distribution to the North American Direct Market thanks to a short saga affectionately referred to as the “distribution wars” (comic book fans must have their dramatic titles) in the ‘90s, where Marvel attempted to wrest distribution control from Diamond Comic Distributors, Inc., referred to as Diamond,  by buying a competitor to distribute in-house. The move prompted a war of attrition between Diamond, Marvel and a third distributor, Capital City, which was soon absorbed by Diamond.

In late 1996, Marvel filed for bankruptcy, the move that led them to sell off many of their characters’ film and TV rights that only recently came back under their control with Disney’s purchase of Fox. By early 1997, Marvel’s distribution endeavor failed and the publisher joined the long list of companies signing exclusive deals with Diamond.

Diamond came out on top, and, according to Murray, do deserve credit for saving the industry. But, as Murray says, “they’ve grown not complacent, but outdated.”

Last spring, with much of the country still under quarantine and the comics industry effectively shut down through Diamond’s decision to stop distributing comics to stores until lockdowns abated, DC Comics, one of the first publishers to sign that exclusive with Diamond back in the ‘90s, announced that it would be ending said deal and instead using two new distributors on the scene: Lunar Distribution and UCS Comic Distributors, the latter announcing last October that they’d no longer be distributing DC products after less than a year of service.

What troubled many store owners, Murray included, was the companies behind these new distributors: Discount Comic Book Service (DCBS) and Midtown Comics, respectively. Both companies are often seen as competitors to the Direct Market, as both offer likely the most robust online comics ordering and subscription systems in the American market. The move away from Diamond and, more specifically, toward these new distributors, was taken as an indication of DC’s lack of care for the Direct Market, which remains the biggest source of revenue for mainstream comics publishers.

The move was a logistical nightmare too — already working to adapt his store to COVID-19 regulations, Murray now had to learn a whole new ordering system, one that would drive his ordering costs with Diamond up as the chunk of DC comics were taken out of the discounted shipping costs.

With Marvel’s move from Diamond to PRH, Murray feels quite a bit differently. For one, there’s a healthy amount of lead time before the switchover, and the store already has an account with PRH for the books they often order from the publishing side of the distributor. And whereas DC moved to competitors of the Direct Market, PRHoffers no other direct-to-consumer ordering systems for periodicals.

As for the longer-term effects of the move, Murray thinks “it’s too early to say.” In the immediate future, Murray expects his comic book orders, now split between three distributors, to come with increased shipping costs, but he expects the free shipping PRH offers to eventually offset the loss of discounts with Diamond.

Murray is relatively unsurprised with the fact that these decisions were made, even if he was caught off guard when the news first broke. For years, Diamond has begun to settle more into being the only distributing game in town, allowing that lack of competition to foster problems without any impulse for a solution: damaged shipments, lack of communication, lack of transparency — just because Diamond was the only real distributor for decades doesn’t exactly mean they were perfect.

The straw that broke the camel’s back, Murray thinks, was Diamond’s unilateral decision to shut down distribution for a couple of months mid-pandemic, a move that raised the ire of many comic book retailers who needed some sort of income (Murray was appreciative of the move — he can’t exactly sell through stock if he can’t even sell to customers). Basically, “Marvel and DC didn’t like that someone else decided it for them,” Murray says.

DC was the first major publisher to begin distributing comics to shops again, using its two newest partners, but the year has seen some major restructuring for the publisher, including a massive round of layoffs and a stripped-down publishing line.

In the last interview, Murray said “DC has been gutted as a publishing company,” and though there have been changes made since that time, he wound up using the exact same language in this interview, unprompted. With much of the staff with more than two years of any experience in their roles gone, Murray doesn’t think there’s any real infrastructure in place.

“All of the institutional knowledge that they’ve lost is astounding,” Murray says.

Even the newest publishing line relaunch, an increasingly common marketing technique for Marvel and DC wherein the line of monthly comics is either “relaunched” at new #1s designed to entice new readers or collectors or continued with new creative teams and storylines, this one being dubbed “Infinite Frontier,” isn’t really enough to assuage Murray’s fears about the future of the publisher.

Given what’s going on behind the scenes, he feels DC has fallen victim to the “massive amount of debt” that parent company AT&T has to deal with.

But where one publisher might struggle, others find more room to flourish, as evidenced by what Murray calls a “renaissance for smaller publishers,” Vault Comics, AfterShock and BOOM! Studios among them, the latter of which just recently pulled off one of the highest selling single issues in years with BRZRKR #1, likely thanks to Hollywood star Keanu Reeves’ co-writing credit.

It’s not going to offset DC’s, or Marvel’s for that matter, market share anytime soon. As much as Murray roots for the smaller publishers, he says that at the end of the day, “known IP will sell.”

As newsworthy as Marvel’s move was, it’s far from the only uncertain factor that’s proven a point of contention for retailers, readers and publishers alike.

In late February, seemingly out of nowhere, non-fungible tokens (NFTs), a kind of virtual ownership over an image’s online presence born out of the same digital milieu as cryptocurrency, became a hot topic of debate on social media.

Given the visual element of comics, it’s no surprise that creators and publishers in the medium began taking advantage of the sudden demand for NFTs, putting up various virtual statues, images and even full comic books for auction.

Needless to say, not everyone was impressed. Comics artist Artyom Trakhanov wrote a particularly incisive analysis of the impact of NFTson the comics medium and art itself for The Comics Journal, a treatise that Murray seems to agree with.

“It’s an example of the absurdity of our economy,” Murray says.

Murray sees the NFT craze as another indication of speculation gone stupid.

In the ‘90s, a speculation boom fueled by inflated prices for variant covers (featuring alternate art often requiring incentives to order and thus proving more valuable for dedicated collectors with an eye for rarity) nearly collapsed the American comics industry, causing a contraction in both the specialty retailing market and the publishers’ output.

The greed that underlies speculation, an element of the comics industry that often goes hand-in-hand with “flipping,” or purchasing a comic book with the intention of selling it for a higher price, is a broader societal problem, but it’s one that can be seen on a micro-level within the industry.

“I’ve seen guys come into the store and buy a stack of the same #1s just so they can flip them,” Murray says. For many, the comics medium is purely an investment opportunity. Many such consumers rely on “grading” the comic or having the comic’s condition evaluated by an “impartial” third party, often a company called Certified Guaranty Company (CGC), and “slabbing” it, or encasing the comic in a hard plastic shell intended to preserve its current state.

The process can be time-consuming, and to Murray’s mind, it’s pointless, little more than turning comic books into “coasters” rather than something you can actually read and enjoy. This isn’t to say that there’s never a good reason to slab a comic — if you have a comic as rare as Fantastic Four #1 or Amazing Fantasy #15, you might want to make sure it won’t be damaged. But it’s most often used to flip whatever comic is being graded. As Murray says, “the new American Dream is to be a middleman.”

The NFTs, the grading, slabbing and flipping, even the recent GameStop shorting craze that Murray confesses not to know too much about “what happened there” — it’s all just an economy of boredom.

Even with the rampant — and growing — disparities in wealth across the country, there never seems to be a shortage of opportunities for the bored consumer, no matter how such money pits devalue the way we consume art.

For Murray, comics are a real business and they deserve to be treated as such. Since February, he’s served as vice president of ComicsPro, an association of comic book retailers devoted to preserving their way of doing business in an industry to which the Grim Reaper known as “content” seems to be visiting next.

Comics have been dying for as long as they’ve been around. Somehow, like the many colorful costumed adventurers that call the medium home, it always seems to get back up and start walking again.

For as long as there are people like Murray involved in the industry, railing against the corporate greed or economies of boredom, or the tiniest publisher using the last of their savings to put out just one more comic book, or the kid in the classroom absentmindedly doodling in her notebook, comics will never die.

And companies certainly won’t stop trying to sell you a $13,000 seven foot tall Venom statue, either.