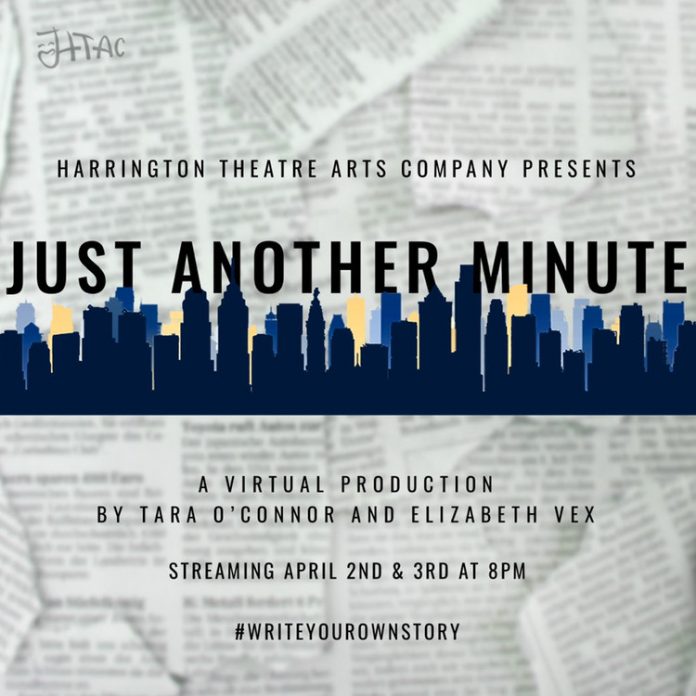 There are many tragic stories that have come from the COVID-19 pandemic, but these two juniors from the Harrington Theatre Arts Company (HTAC) wrote a story with a happier ending.

“Just Another Minute” is a musical following the main character, MC and her journey as she makes her way up the corporate ladder. As a journalist intern in Philadelphia, she challenges herself to write her own piece about young people in her city. She comes across many people on her journey, all taking place during the COVID-19 pandemic. Elizabeth “Liz” Vex, co-creator, says everything adds up to one important takeaway.

“You’re never really as lonely as you think you are, and things are going to get better,” Vex says.

The show was inspired by isolation, the idea sparked while co-creator Tara O’Connor was walking home from the music building. She ran home to Vex, her roommate, to pitch the idea. The options that the program had were limited due to the pandemic, so writing their own show was the perfect solution, as well as saving money that would usually be spent on buying rights to other shows.

Vex wrote the first full draft of the musical in two weeks during December 2020. Writing a musical is a tough process. In the last few months, the script has gone through multiple rounds of hard edits, with only minor changes left to make. O’Connor wrote most of the music between November and mid-January, with tweaks since then to fix the orchestrations and cast. Vex estimated that the show will be about an hour and 15 minutes long.

O’Connor is a junior choral/general music education major with a minor in theatre studies. She is on the board for HTAC, and she had been the music director of “Falsettos” and was a co-music director for the virtual cabaret that the university put on last year.

“[Theatre] is a great way to do music in a way that is not related to my job or whatever my future profession will be,” she says. “I am hoping to be a music teacher in the future, and I also want to teach theatre.”

Vex is a dean’s scholar choral/general music education and vocal performance double major with a minor in music industry. The minor is something she put together herself, and it incorporates song writing, jazz and music management into one. Vex has prior experience in writing musicals, having written one when she was in high school and running the entire show with her friend and co-creator at the time.

“Being on stage is what I really enjoy, so having the opportunity at UD to do that with this organization is really awesome,” Vex says.

With the university’s COVID-19 restrictions in place, it has made the process a bit more difficult than before. The university’s shifting restrictions forced the creators to make a lot of changes to the production. The two writers and the program had already decided to do the entire production virtually, having it premiere on their YouTube channel “Harrington Theatre Arts Company” on April 2nd and 3rd.

The release date and chosen platform has stayed the same, but the process of filming has changed significantly. With the help of an aesthetics director to assist with positioning and tips on how to film, each cast member from HTAC will record their parts themselves. They will also record their own music and send it to the musical director to put it together with the previously recorded pit. Every scene will be pieced together to make it look perfect.

“There’s a parallel between what we’ve been doing and what MC does in the story, where her story doesn’t end up the way she thought it was going to either,” O’Connor says as she describes how COVID has affected their musical and the character they created.

“Just Another Minute” was created to help students and community members feel good during times like today. “You might feel isolated now, but there are people who are kinda going through it with you,” Vex says. “Everything’s gonna be okay!”

Editor’s Note: An earlier version of this story referred to the wrong YouTube channel. This has since been corrected.