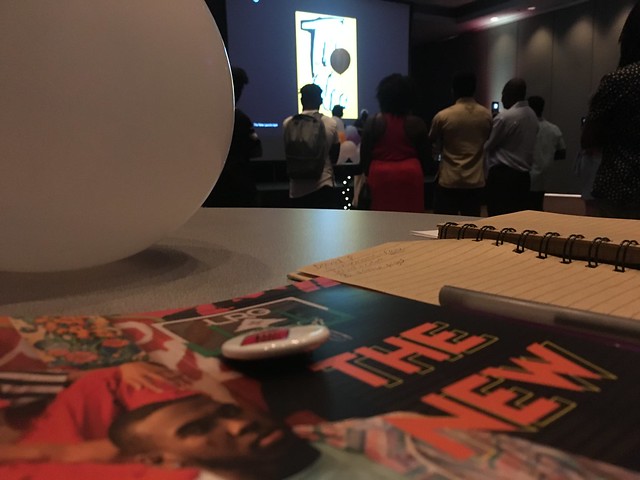 Grace Haumersen/THE REVIEW
The newest magazine to hit campus focuses on inclusivity as well as creativity.


Expectations were high for The New’s debut this past Thursday night. Despite their infancy on campus, their namesake and social media presence drew a solid crowd to the event. Upon arrival, Trabant teemed with light conversation while Daniel Caesar’s smooth voice drifted from the loudspeakers. The once drab multipurpose room was transformed into a colorful, art-filled space.

The magazine’s mission statement clearly outlines their goal to “create solidarity within the minority population,” while simultaneously spreading cultural awareness on campus. The event itself was a display of how The New magazine seeks to strengthen the underrepresented student presence on campus. Students of different cultures, races, ages, sexes and backgrounds came together to celebrate the start of a publication by and for them.

Carmela Dow, a senior apparel design and entrepreneurial studies student, stood confidently in front of her seven handmade garments. Colorful, well constructed and energetic, the clothing fit well into the atmosphere of the event. Students periodically walked up and ogled at the work.

Dow praised founder Monique Powell for her initiative to start the Registered Student Organization (RSO) and get the magazine out to the public this semester. A past contributor to “UDress,” she acknowledged that the 13-year-old magazine is “not enough.” While she respects it’s 13-year reign, she addressed the fact that The New is “a necessity on our campus.”

“After I graduate, I really hope that students keep up the amazing work that went into this magazine,” Dow says. “Our campus needs this sort of creativity and collaboration.”

This sentiment was shared by Theresa Meriam, a junior fashion merchandising student and president of The New. Meriam validated the importance of the publication in voicing diverse perspectives, and has felt that need herself as a minority student on the university’s campus.

“Being a minority student on UD’s campus, you’re very aware of your own race,” Meriam says. “The New is an outlet to say ‘we are here,’ it’s important so that we feel heard.”

The New and publications like it are pivotal additions to college campuses across the nation, Meriam explains.

“College is a time where you can be your truest self and learn to develop into who you are as a person,” Meriam says. “The New gives people the opportunity to discover new things and learn more about themselves”

Nestled in the back right corner of the MPR was a table draped with a pastel tablecloth, rosey glitter and pink flowers. Nina Isaboke, founder of No Offense clothing, stood proudly in front of thrifted clothes and spoke enthusiastically about her business.

“I started ‘No Offense’ for people that want to thrift but don’t know how.” Isaboke says. “I sell thrifted, wearable clothing that suits my personal style.”

Throughout the night, she could be seen showing her finds to eager students wishing to emulate her style as they purchased sleek dresses and flowing skirts. She felt that her brand embodied a passion for the “different, cool and eclectic” feel that The New has.

Isaboke will have the opportunity to grow her clothing line alongside magazine. She plans to expand her clothing line to include plus-sized and male clothing styles as The New also grows into its own over the next few semesters. She sees the RSO as a community “that’s inclusive for everyone.” It represents a “new generation of students ready to express themselves” through creativity.

Theresa Meriam shares this all-embracing vision for The New. She and her fellow magazine contributors show great excitement and initiative, and have high hopes of keeping up the momentum through the coming years. With visions of paint nights, music festivals and art workshops, Meriam and “’The New’ Crew” have a lot up their sleeve.

“I want the organization to get bigger and be able to host more events. I don’t want to just have a debut event,” Meriam says. “I want to create a core community of creative people.”