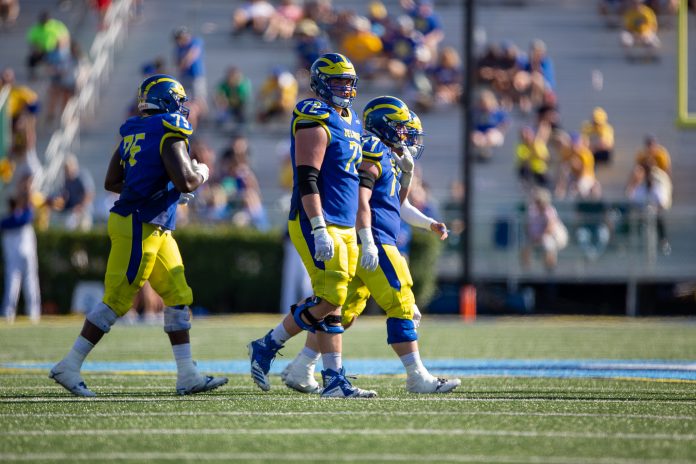 The sport of football is a game of inches and also a game of clichés. “They have to stop the big play.” “They need to establish the running game.” “They’re marching down the field.”

“They need to dominate the line of scrimmage.”

As cliché as it may sound, the saying “they need to dominate the line of scrimmage,” might need to be Head Coach Danny Rocco’s motto for Delaware football entering the Spring 2021 season.

The Blue Hens enter the spring campaign with a large number of young, skill-position players on the offensive side of the football. In a January preseason press conference, Coach Rocco said that he likes the depth he has at wide receiver, tight end and running back. Six of Delaware’s seven returning starters on the offense are at one of these three positions along with quarterback Nolan Henderson.

The one other player returning to the offense is senior left tackle David Kroll. In the fall of 2019 — the last time Delaware played a game — the Blue Hens offensive line gave up 37 sacks on the year, seven more than three other CAA teams. Delaware tied with Towson for the most sacks given up last season.

Delaware will need to fill in the holes left on a line that previously struggled to protect Henderson and now graduated quarterback Pat Kehoe. More alarming is the fact a large amount of lineman on the roster have yet to play a snap in the blue and gold.

Outside of Kroll, the four linemen with in-game experience come from redshirt junior guard Carter Lynch, redshirt junior Mickey Henry, senior tackle Ben Trent and sophomore James Prince III. Between the four, Lynch and Henry are the two with experience in the Delaware program. In the 2018 and 2019 seasons, Lynch split time on the line and on special teams, appearing in a total of 18 games. Henry has appeared in six games through 2018 and 2019.

Trent is a transfer from Virginia whose playing time came mostly on the Cavaliers special teams unit, while Prince III played every snap his freshman year at Howard and was named a FCS freshman All-American. Prince III should automatically solidify the middle of the line with his college football resume already impressive just after one season and his ability to play at center or guard.

Coach Rocco described Prince III as a good addition and said Trent is doing well at right tackle. According to Rocco, Trent is dealing with a minor injury, but he will most likely be out on the field in Delaware’s first game on March 6.

Prince is not listed on the depth chart for the matchup against Maine on March 6.

Even though Trent played primarily on special teams, his experience in an FBS program gives him a leg up, and it is not shocking to hear Rocco say he has done well at tackle. Having Trent across from Kroll should solidify both the blind side and throwing side of Henderson. The question then becomes what to do at guard.

The two names of Prince III and Mickey are intriguing in solidifying the interior line. Mickey has played both center and guard for Delaware. The versatility of the two gives Rocco options along the line and could solidify the line as a whole, with Lynch or another name filling in the other spot at guard, opposite Mickey or Prince III.

Rocco also stated he is really excited by his freshman class of lineman and went as far as saying that some freshmen may get the opportunity to play this spring. Names brought up included Brock Gingrich at center, Lance Schwartz at guard, Braden Clark at tackle and Patrick Shupp who, despite dealing with some setbacks, Rocco said Shupp looks “really good” when he is practicing.

Despite the lack of game experience among the freshman class — with a line that is coming off a rough 2019 season — this group of freshmen gives Rocco more options if Henderson is under constant pressure.

The key for the offense is limiting that pressure and it starts on the offensive line. Giving Henderson time will allow him to find his targets in wide receivers Thyrick Pitts, Gene Coleman II and Chichi Amachi. Pitts saw an increase in his workload in 2019 hauling in 41 receptions for 647 yards and three touchdowns. Amachi and Coleman have continued to develop, and both had career-highs in receptions, yards and touchdowns in 2019.

Opening up holes on the line would also benefit running back Dejoun Lee who should once again become the number one running back, with Will Knight transferring out of the Delaware program over the winter. In 2018, Lee proved a serviceable number one option, rushing for 606 yards and two touchdowns. Even behind Knight in 2019, Lee still ran for 463 yards and two rushing scores.

A new look offensive line also translates onto the opposite side of the line on defense. First-year defensive coordinator Manny Rojas will look to improve a defensive line that by no means had a productive 2019 season.

The Blue Hens managed only six sacks last season and were the only team in the conference to not eclipse double-digit sacks. To make  matters worse, two of the three players to record those sacks in Cam Kitchen and Brandan Hall are out of the program. Sophomore Chase McGowan recorded the other for Delaware.

The defense parallels the offense’s biggest question mark on the line, as Frank Burton III is the only returning starter among the front four. Burton is one of eight to return, with the other seven at linebacker and defensive back.

The most experience on the line comes on the interior with tackles Jordan Morris and Artis Hemmingway, appearing in six and nine games, respectively. Burton III and Hemingway along with defensive end and redshirt sophomore Tommy Walsh are likely to first take the field with the defense on March 6, according to Rocco. He expects the group to be by committee, with a rotation of multiple linemen.

Rocco alluded to the positional groups being by committee due to its depth, which he thinks might be the deepest area on the team. Six defensive tackles are currently listed on Delaware’s roster with another five listed on the defensive line. The experience of Burton, Hemingway and Morris gives the interior line a great place to start. Delaware will need to then apply pressure off the edge.

Getting production out of Walsh as well as redshirt freshman Ryan Fields and the aforementioned Chase McGowan is a must for Delaware, but if they struggle, regular blitzes could become a necessary option for the team. The experience at linebacker and in the secondary could allow the Blue Hens to blitz linebackers and have to rely on its guys in the secondary.

When talking of the secondary, Rocco described his cornerbacks as “better” with both starters returning, while calling his safeties in Kedrick Whitehead and Noah Plack as playmakers.

It is clear that Delaware needs to win in the trenches, especially with the season only having six conference games. A poor start on either line could end up costing the team valuable wins in a northern division consisting of 7 of the 11 total teams in the conference. Improved line play however, could ultimately lift Delaware up even during such an unorthodox season.