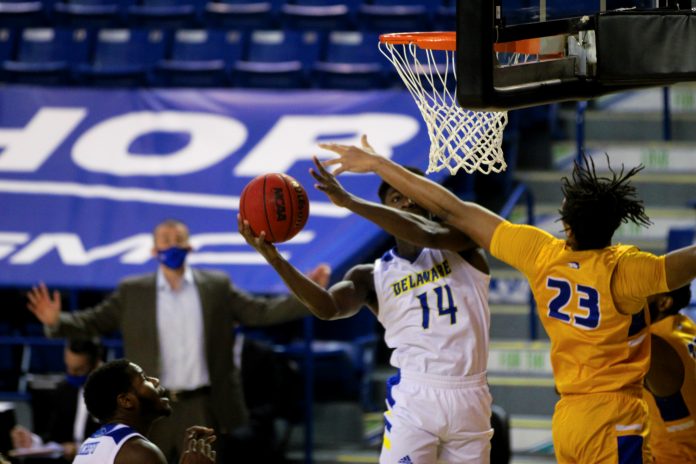 The Blue Hens’ unpredictable 2020-2021 season has had a lot of ups and downs, but one thing has remained consistent: inconsistency.

Coming into the season, there was an expected degree of difficulty and unpredictability in how the season would progress, as the COVID-19 pandemic has presented rapid, strict changes in day-to-day life for all.

The Blue Hens knew their unique schedule would either work to their advantage or disadvantage come postseason play, as the conference-only schedule for the last two months of the season would lead to crucial late-season matchups that would likely have conference tournament implications.

However, before the season could even start, there were already cancellations and uncertainty for the Blue Hens.

Delaware was scheduled to participate in the Mohegan Sun Bubbleville tournament in late November, slated to face teams such as UMass and Siena, but due to a positive COVID-19 test within the program, the Blue Hens were forced to withdraw.

Nevertheless, the Blue Hens survived the COVID-19 pause and began to prepare for the already erratic season.

Delaware would begin play in the new year against the College of Charleston in a two game series at the Bob Carpenter Center. However, less than five minutes into the series’ first game, Delaware was presented with even more obstacles to overcome as senior guard Kevin Anderson went down with an ankle injury.

The Blue Hens would go on to win the first game but dropped the second game. Regardless of the outcomes, their biggest concern was the health of one of the most experienced and talented players on the team in Anderson .

Anderson joined sophomore forward and projected starter Aleks Novakovich on the injury report ahead of the Blue Hens’ visit to Williamsburg, VA for their series against William & Mary .

In game one of the William & Mary series, Delaware blew a 9-point first half lead in an eventual loss to the Tribe, but the loss was not the biggest story of the day — or the weekend.

In the middle of the first half in game one, freshman forward Andrew Carr injured his knee after a collision, spraining his MCL. The injury kept Carr out of the remainder of the game, which was not ideal as Carr had seen an increased role in the Blue Hens’ rotation.

To make matters worse, with just under five minutes left to play, senior guard Ryan Allen sprained his ankle. Allen, who came into the game playing with a broken toe, remained in the game as he attempted to give the Blue Hens another body.

Coach Ingelsby has long praised the toughness and grit of Allen, but due to the already banged up Blue Hens’ injuries in game one, Ingelsby along with Colonial Athletic Association (CAA) and William & Mary  officials decided to postpone game two of the series due to safety concerns for the Blue Hens .

Not to mention, the Blue Hens came into the year with two transfers in former North Carolina Central guard Reggie Gardner and East Carolina guard Logan Curtis, both of whom have battled injuries keeping them from making their Blue Hens’ debuts to date.

As the Blue Hens battled injuries, they had a huge matchup the coming weekend as the CAA preseason favorites and defending conference champions Hofstra Pride visited Newark for their series. Luckily for Delaware, Allen and Carr were able to play in the series, but Anderson and Novakovich remained out.

The Blue Hens had failed to establish consistency as a team, and were still trying to find their offensive identity. Prior to Hofstra, they were 1-2 in conference play and could not afford to be swept.

In game one, things clicked for Delaware. For the first time all season, the Blue Hens seemed to find their identity offensively, leading to a huge 74-56 win over Hofstra. The Blue Hens have long had the reputation of living and dying by the three-pointer, but against Hofstra, the game was won down low. Carr finished with 19 points and 4 rebounds while redshirt senior forward Dylan Painter finished with 18 points and 19 rebounds, both carrying the offensive load for Delaware.

Game two was much different however, as Hofstra jumped out to an early 13-0 lead. The Pride kept their foot on the gas for much of the first half, at one point leading by 20 points .

This did not stop Delaware’s comeback efforts, as the Blue Hens, who trailed by 15 with just under 8 minutes left in the game, only trailed by a single point with 50 seconds left to play .

After a stout defensive possession for Delaware, they regained possession with 19 seconds left to play. The inbound pass went to Allen, but he was quickly met with pressure from the Hofstra defense. The clock was quickly winding down, so with about two and a half seconds left on the game clock, Allen had no choice but to fire a cross-court pass in the corner to guard Ebby Asamoah .

The Hofstra defender smothered Asamoah, but after a quick pump fake and pull up he was able to get the corner three-point attempt up. The buzzer sounded, and Asamoah’s shot sank in, but Delaware’s miraculous comeback victory was not, as Asamoah’s shot did not leave his hand before the final buzzer sounded.

Though the Blue Hens split with Hofstra, the weekend felt like a win. The Blue Hens were a half a second away from sweeping the defending conference champions.

With their next series ahead against the University of North Carolina-Wilmington (UNCW), Delaware looked to get back Anderson and Novakovich. After promising improvement for both players’ injuries, the weekend ahead provided a chance for both to return.

To this point in this season, Delaware had battled injuries to many key players in its rotation. However, this provided opportunities for younger players like freshman guard Gianmarco Arletti to garner experience and get valuable game minutes.

Against UNCW, the Blue Hens split the series, losing game one 77-70, but winning game two 67-62. A split wasn’t the worst thing in the world for Delaware, as they were still a banged up team.

Luckily for Delaware, Anderson came off the bench in game one, playing 30 minutes, and even received the start in game two, playing 38 minutes. Anderson looked much better the more he played, and his return was crucial for Delaware’s success. Though unfortunately for Novakovich, despite playing a few minutes in each game, he still was battling the stress reaction injury in his foot.

However, Delaware was starting to get healthy at the right time, because as key players returned, the offense had found its identity.

At this point in the season, the CAA had become wildly unpredictable. Its preseason favorite in Hofstra was doing solid, but not leading the pack. Teams like James Madison, Northeastern and Charleston were all overachieving. The entire conference battled some sort of scheduling changes due to the pandemic. Through uncertainty and unpredictability, there had been no clear favorite in the conference.

Due to all of this, Delaware needed a sweep against one of the weaker teams in the CAA in Elon. That is exactly what happened as the Blue Hens took care of business, defeating Elon 66-43 in game one and 75-70 in game two.

The Blue Hens were scheduled to play Northeastern the next weekend after the Elon series in what would be another crucial CAA matchup with heavy postseason implications. At the time, the Huskies were 7-1 in CAA play and at the top of the conference.

However, due to a positive test within the Blue Hens program, the series against Northeastern was postponed.

Delaware is currently amid its second COVID-19 pause of the season, right in the middle of the most important part of their schedule. Due to the pause, Delaware was forced to postpone the Northeastern series and their series against Drexel and James Madison .

There has been no rescheduling of Delaware’s postponed conference matchups, nor has there been any updates within the program regarding the status of those postponed series.

The stretch of series after Elon would have been the most important series of the season for Delaware, as the results would likely determine where the Blue Hens would be seeded in the CAA conference tournament. Postseason implications aside, it was a very important stretch to see just how good the Blue Hens are.

The CAA conference tournament begins on March 6, so with under a month until tournament time, it would be difficult to think Delaware would be able to make up all, if any of their postponed matchups.

If Delaware is unable to make up their postponed games, it will certainly pose difficulties for the officials of the CAA to determine how exactly they will decide the tournament seeding. It is likely that the entirety of the CAA will not all play the same amount of games this season, so the conference may pivot to win percentage instead.

Despite these uncertainties, Delaware’s ever-changing 2020-2021 season will take the Blue Hens to the start of the CAA Tournament on Mar. 6.