Commentary: “Still Breathing”: bringing concert life back to the university 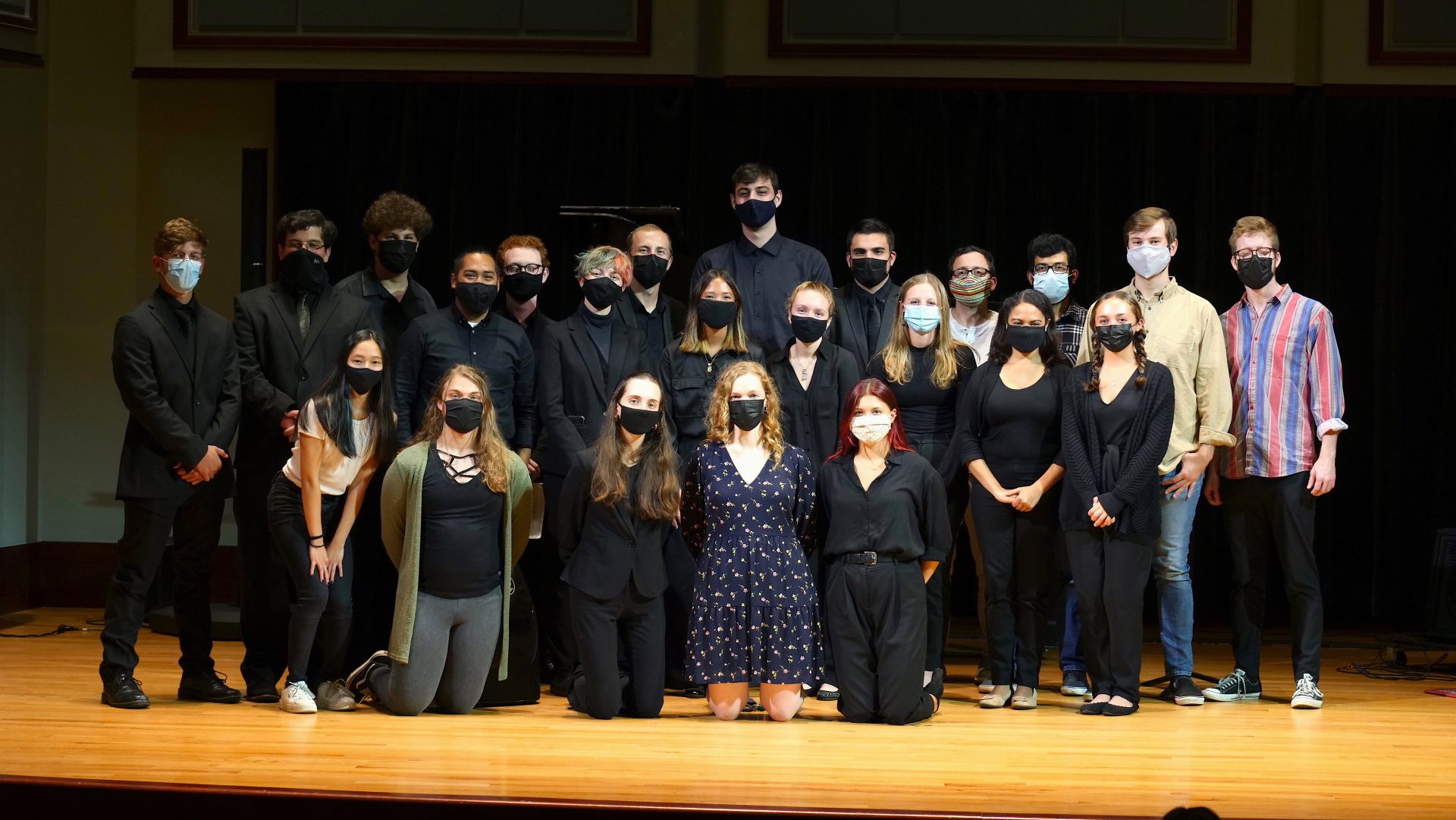 The “Still Breathing” composition concert took place in Gore Recital Hall on Oct. 8. The concert consisted of six pieces of music, each composed by a different university student. The concert was specifically focused on chamber music, with instrumental music played by a small ensemble and one member assigned to each part.

Each piece was uniquely different from the others with different instruments and inspirations. The first piece of the night titled “The Catastrophe” by Tess Edwards, a junior composition major at the university, takes the audience through the childhood of her sister.

“I wrote a piece for clarinet and a string quartet … and it’s about the childhood of my sister,” Edwards said. “It goes through the ups and downs of being a toddler, crash landing into naps, fighting with my brother, things like that. It’s really fun, and I’m just trying to bring that to life.”

This was Edwards’, along with several other composers’, first time having one of her pieces performed live. Due to the pandemic, many of the composers were unable to present their previous music in a live concert setting.

The concert was completely student-oriented in that the pieces and songs were written and performed by students. Composers could choose to have their piece played by other students or, like R.L. Aurora, a freshman composition major, they could play their own piece.

“The piece that I’m showing in the concert is called ‘Intergalactic,’ and I wrote it within two weeks … the whole idea is to capture the feeling of space,” Aurora said. “So when I was writing this, it was all about nebulas and stars and everything, and that leads to this surreal sounding stuff.”

This was an absolutely gorgeous piece, filled with intense, fast-moving parts that crashed into dark, ominous tones.

In contrast to these two pieces, the song “For Better or Worse” by Ben McMonagle, a sophomore double-majoring in music education and composition, and the piece “Eight Lines” by Leah Michael Whalen, a current senior music education major, are improvisation works.

“A song that I have is written in the form of a lead sheet, which means that I wrote down a melody, words, lyrics and chords, but there’s no specific ways that the chords have to be performed because this is more of a jazz thing,” McMonagle said in regards to “For Better or Worse.”

This song is a beautiful, sad jazz song that, according to McMonagle, represents the feelings of someone who loves somebody they can’t have.

“Eight Lines” is also different from “For Better or Worse” because it is entirely improvised. Every time it’s performed, it has a completely different sound. It depicts two friends having a conversation on the phone. At this most recent concert, the song took on a very serious and ominous tone, almost as if it was a scene from a horror movie. The piece is truly one of a kind.

The last piece played at the concert titled “Chamber Piece for Clarinet” by Michael Fascetta, a sophomore majoring in music education and minoring in composition, is an abstract piece he wrote purely through playing around on his clarinet.

“I wrote a clarinet quartet for this concert. It’s a very abstract piece. I’m a clarinetist, so I always want to write for my own piece. It started as just the writing for one motif and it kinda sounded like the entrance to a Disney movie, which was kinda fun, so I just kinda took that and established a key and expanded on it a little bit,” Fascetta said

Finally, one piece that wasn’t performed in this concert but deserves a great deal of recognition is Meghan Lalo’s “Morning.” Lalo is a current sophomore majoring in composition.

“It was a duet between a clarinet and a baritone voice,” Lalo said. “I took a poem by Paul Laurence Dunbar called ‘Morning,’ and it just inspired me because I was a freshman, and it’s about beginning and blossoming, so it was a great inspiration for my first piece at UD.”

This piece was performed during a different university concert last semester, but Lalo is currently working on a clarinet quartet that can hopefully be heard during the next student-centered concert on Nov. 10. The concert will take place in Gore Recital Hall at 8 p.m. and will feature compositions from university students.

Additionally, one especially great moment from the concert was seeing all the support and love from the composers, players and directors.

“One of the things that I think makes it better when you’re getting a piece performed is having people that you really trust doing it for you,” Edwards said. “Four out of the six of my players are actually my roommates, so it’s nice to know that they have my back and support me.”

While having these interpersonal connections among student composers and performers are absolutely amazing, the support from the audience is just as important. Showing up for concerts to support these budding musicians is extremely important and one main goal for Jennifer Margaret Barker, professor of music theory and composition.

“[We want] To show the rest of the university community what we do,” Barker said.

According to Barker, all student composition concerts are open to the public. I believe they’re a spectacular way to support the talented musicians and professors who go through the efforts to set them up. It’s clear from attending just one concert that these musicians bare their souls through their music. It’s incredibly powerful and creates a sense of amazement and inspiration. The concerts are truly wonderful and deserve all the support they can get.

Tess Williams is a staff reporter for The Review. Her opinions are her own and do not reflect the majority opinion of The Review’s editorial staff. She may be reached at tessanne@udel.edu.