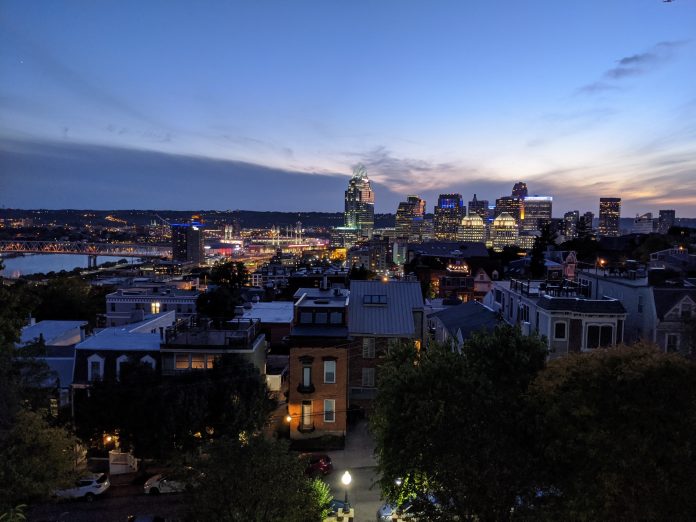 “Everyone who wasn’t perfect but wasn’t terrible should get to spend eternity in Cincinnati,” says one character in “The Good Place”, just one of the many jests towards the place I call home dispersed throughout TV shows and films alike. The idea of staying in Cincinnati was once a fate I, too, found highly unpalatable. Now I’m not quite sure that the mediocrity it’s often ascribed is merited.

Cincinnati, Ohio, probably isn’t on your radar, and to be fair, Newark, Delaware, probably isn’t on the radar of most in my hometown either. A midwestern city known for its chili, ice cream and baby hippo, its influence seldom extends to the grand state of Delaware.

Last I checked, there’s not a university regional alumni club in the Buckeye State (not yet). Ohio does have a Delaware County, though. And a Newark. So there.

In the pre-pandemic world, I anticipated the chance to spread my wings and leave the land of flying pigs (sorry if you don’t get these references, but now you can amaze your family and friends with your Queen City knowledge), and this desire continued throughout the early months of the pandemic.

With the realization that my living in Cincinnati would be indefinitely extended, and with long walks being the primary means of entertainment outside of streaming services, video calls and baking, over the last few months, I’ve become deeply acquainted with my city. Through these three-hour, on-foot explorations, I’ve gained a deep appreciation for the place I’ve lived for nearly two decades.

Our seriously underrated art museum, our wonderful neighborhoods, our general affinity for all and any food, the fact that Emilio Estevez apparently lives somewhere downtown — these are all aspects of Cincinnati I’ve especially come to value as I’ve attended a Mid-Atlantic university from my wobbly desk in the Midwest.

Whenever there’s some sort of connection to Cincinnati in any of my classes — and believe me, everything can probably be traced back to Cincinnati in some way — I lose it. Through my circumstantially-enforced stay, I have become an enthusiast of my hometown. Although I have yet to meet anyone from Cincinnati who currently attends UD, I have come across some people from Ohio (as well as Northern Kentucky, which is just across the river), and that’s good enough for me.

It’s been especially good fun seeing the surprise on people’s faces when they learn of my Southwest Ohio origins. Indeed, we have students all the way from California and outside of the country, for that matter. Yet Ohio just seems to have a mesmerizing appeal to it. It’s probably the soybean fields.

At the same time, it’s been the approximate 550 miles between myself and campus that’s made me especially eager about attending University of Delaware (UD), partially because I’m the only person I know in my immediate area that attends my university, partially because I’ve only seen UD once.

Of course, the price of this has been the polite nods and smiles of people learning I attend college in the second smallest state in the country, as they suddenly remember that yes, Delaware indeed exists. Additionally, whenever someone in a Zoom call comments on how cloudy or rainy the weather is in Delaware, and I look outside my window and see sun, I can’t help but feel a twinge of guilt. It’s all been worth it, however, and I’ve managed to have some one-of-a-kind experiences.

I have worked on group assignments with people eight and half hours away from me. I have recorded a podcast with someone I’ve never actually met in person. I have written about on-campus happenings without actually being there.

I’ve also had the opportunity to learn more about Delaware from afar, although some burning questions about the state still keep me up at night.

What is this Rehoboth Beach you speak of? How far is Bear from Middletown? So there’s no sales tax, none at all?

If YoUDee and Baby Blue are siblings, who — and where — are their parents?

When the time comes for us to officially return to campus, I will probably feel more homesick than I would have had the pandemic not happened and a normal return to campus did. At the same time, hearing about the magic of the Delaware area has only made me anticipate experiencing it myself even more.

I look forward to trading Kroger for Wawa (which is so much more fun to say), Graeter’s for UDairy (I will always love both equally), and LaRosa’s for Grotto’s (I’ve heard mixed opinions about Grotto’s, so perhaps this one will remain TBD).

If anything, I’ve learned the importance of where appreciating you live, no matter how much popular culture may taunt it. In being confined here for — what is it now — almost 14 months, I’ve explored parts of my hometown I didn’t know existed and realized how intriguing of a place it really is. I only hope that I can bring that same exploratory spirit with me to Delaware in the near future.

To be fair, I’m not sure if I’d spend eternity in Cincinnati or anywhere for that matter. Just the same, I know for certain that I’ll miss it and at the same time, anticipate the next few years in the First State.