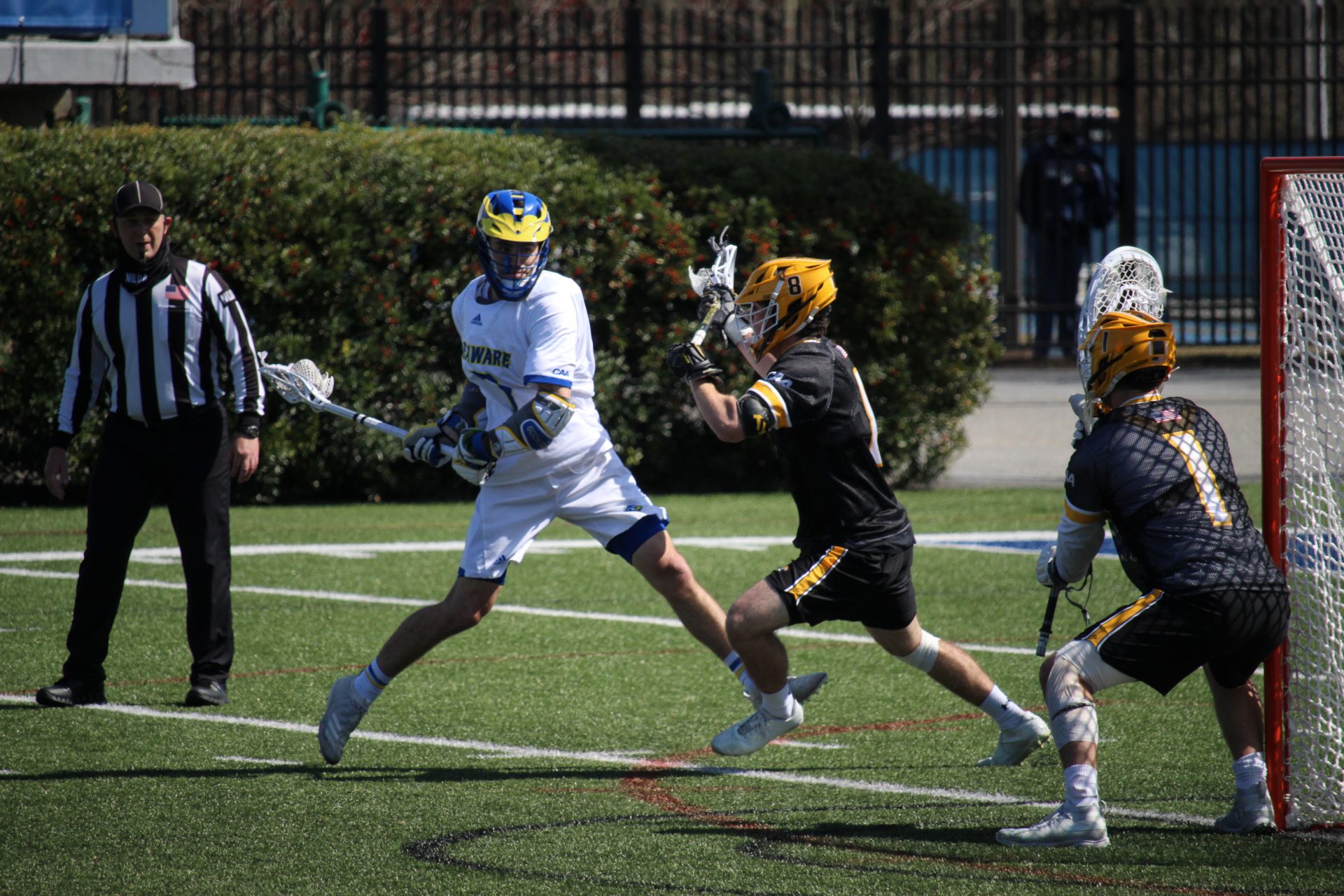 For the first time all season, fans, not just family and friends, were allowed to find a seat at Delaware Stadium to watch men’s lacrosse face Towson. The game did not disappoint.

Just under three minutes into the overtime period tied at 12, junior Tye Kurtz fired a shot from the left side of the cage to give Delaware a 13-12 victory over the Tigers. Kurtz scored only one goal in the game, but it came at the most pivotal point in the game and capped off a second half Delaware comeback.

The junior attack credited Jake Hervada for a faceoff win at the start of overtime that almost ended the game in the opening seconds on a shot that missed the net.

“We were struggling a little, and that was a big time win by him,” Kurtz said. “We wore them down right to the end of the shot clock and I was fortunate enough to get a good matchup on me and I was lucky enough to hit that shot and it starts with all the rest of our guys doing the right things.”

“I think emotion and some immaturity played into our start and just how excited we were for this game, and I don’t think we handled the emotions of the game very well,” Head Coach Ben De Luca said of Delaware’s first half. “Towson took advantage of it; that’s a very experienced and a very dangerous team.”

“We just talked to our guys about remaining calm and remaining poised and making fundamental plays and executing fundamental skills at a high level one play at a time,” De Luca said of his team’s second half adjustments. “Doing a better job of locking down defensively and giving our goalie some better shots to be able to see and doing a better job offensively on capitalizing on opportunities we were able to generate.”

In the second half, the Blue Hens limited Towson to only three goals and outscored the Tigers 8-3. In the fourth quarter, the Blue Hens pulled within one off of four unanswered goals.

Two Towson goals opened up a three-point lead for the Tigers with just over eight minutes left in the game. In the final eight minutes, Delaware put up three unanswered goals to send the game to overtime, including a Charlie Kitchen goal with just over a minute left in regulation to tie the game.

Kitchen was one of three Blue Hens to finish with three goals for Delaware. Mike Robinson and Cam Acchoine were the other two Blue Hens to put three shots in the back of the cage.

“It all starts with him; he’s our guy; he’s the one who starts it up for us, and when we get into a situation like that, we’re all looking at him to step up as a leader and a captain and he did that unbelievably today,” Kurtz said of Kitchen’s play. “If he has to score to win, he’s going to do that, and if he has to pass the ball up three passes advance he’s going to do that as well.”

The win is Delaware’s first over Towson since the 2016 season. Entering the matchup, Inside Lacrosse’s Top 25 rankings had Delaware ranked No. 18 in the nation. De Luca sees the win as a plus for his team but knows this is not the only matchup with the Tigers on the season. Delaware is set to visit Towson on April 24.

“It’s been a while since Delaware has beaten Towson, and I think that is good for our guys and for our program; but the truth of it is we’ll play them again in a couple weeks, and there is a potential we’ll see them more than once,” De Luca said. “What we’re going to do is celebrate this victory and be excited about it and then turn our eyes pretty quickly to Fairfield in a couple weeks.”