Editorial: RBG is gone, what now? 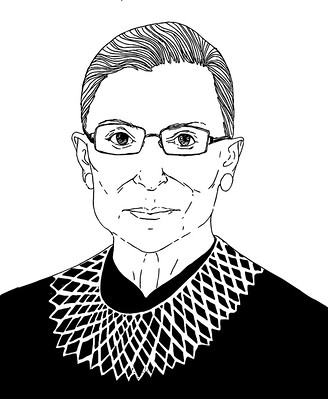 When the news of Supreme Court Justice Ruth Bader Ginsburg’s death spread, the response was an overwhelming mix of panic and uncertainty. Women have lost an advocate for reproductive rights and gender equality. While her absence is felt by a multitude of American citizens, let’s understand that just because she is gone doesn’t mean all hope is lost. However, if you look on social media you might think otherwise.

The days following Justice Ginsburg’s death have been hectic if you’re an avid social media user or newspaper reader. There has been immense praise on social media outlets including Twitter, where some consider her to be a superhero. And although those pictures of little girls in Supergirl outfits are adorable, at the end of the day, she was an 87-year-old woman with her own faults. With that in mind, we all must remember to not turn her into another champion since they never live up to our expectations anyway.

While Justice Ginsburg’s demise looms over the nation, Republicans have been scrambling to find her replacement. This scrambling is mainly due to the fact that both parties are only looking out for themselves.

Liberals and conservatives have been playing very different games from the start, mirroring that of a boxing match. In one corner we have the highly opportunistic, aggressive conservatives and in the other corner, we have the passive, complaisant liberals. You don’t even have to watch the match to know how this will go down, but in case it is unclear: The conservatives are succeeding so far.

Yet, an interesting idea has come to the table: A new bill titled “the Supreme Court Term Limits and Regular Appointments Act.” This bill, that will be introduced on Tuesday, Sept. 28 by California U.S. Representative Ro Khanna, would allow every president to appoint two justices per four-year term and limit justices to an 18-year appointment. The goal of this bill is to “save the country from a lot of agony and help lower the temperature over fights for the court,” said Representative Khanna in a Reuters article.

Of course, everything depends on if a new Supreme Court Justice will be appointed before or after the election. The Thurmond Rule, an unwritten, non-legally binding rule, states that a new justice cannot be appointed during the upcoming months of a presidential election. This rule, however, which prevented former President Barack Obama from appointing a new justice in 2016, could be completely ignored this election year, which is pretty hypocritical.

A poll conducted by the Washington Post and ABC News, Sept. 21-24, concluded that 38% of Americans said Justice Ginsburg’s replacement should be nominated by Trump and confirmed by the Senate, while 57% said the winner of the presidential election and a Senate vote next year should be the determining factor.

If that 57% get their way, the partisanship of the new justice will depend on if Trump or Biden wins the election. Both candidates have made it extremely explicit that they will name justices who will carry out their agenda. But no matter if the justice is conservative or liberal, the court will continue to have a conservative majority.

That is to say, we at The Review are deeply troubled when we see who President Trump is pushing forward to replace Justice Ginsburg. However, the justices the president has previously appointed have continuously delivered liberal victories. For example, in the 6-3 ruling of Bostock vs. Clayton County, Justice Gorsuch wrote the court’s opinion on ending workplace discrimination based on sexuality.

The most prominent change that will likely occur if another conservative justice is installed is that we might have a less balanced court than in previous years.

The Review’s weekly editorials are written to reflect the majority opinion of The Review’s staff. This week’s editorial was written by Xiomara Moore, staff reporter. She may be reached at xmoore@udel.edu.