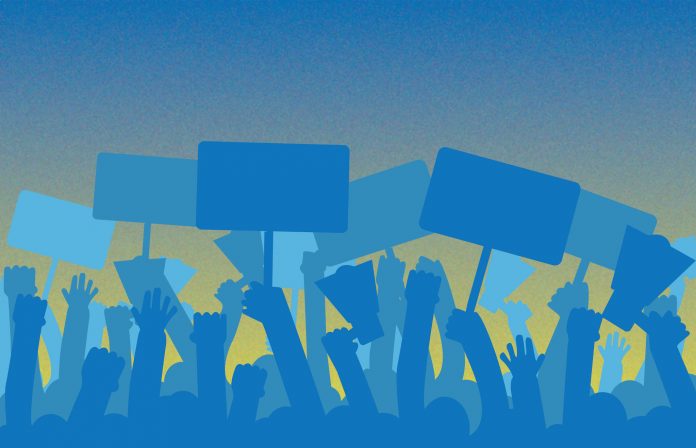 Following the clash between students and members of the Key of David Christian Center two weeks ago, the university issued a statement that failed to convey a prioritization of student safety. The Sept. 30 email reflected an administration striving to appease all parties and awkwardly excusing the very hate speech they condemned in a prior paragraph.

The university’s insistence on treating the incident as a routine expression of free speech is deeply disappointing. The disgusting comments hurled at LGBTQ, Muslim and female students make it more than appropriate for the university to take a stronger stance. Thankfully, students took the initiative to stand up for one another, displaying unity in the face of hate.

Shielding students from hateful discrimination should be the primary concern, yet the email reads like a half-hearted denunciation from an administration attempting to wash its hands of any responsibility.

Had the events of last Wednesday afternoon been an isolated or unexpected incident, a lack of preparation for the university’s response might be plausible. However, the university was alerted hours ahead of the group’s arrival and, as it stands, this is not the first time that this organization has accosted and verbally assaulted students on our campus.

In 2017, “I Heart UD Day” was overshadowed by the same group, with the university failing to protect students from being targeted by hateful speech.

Just like during the protest last week, four years ago students were targeted individually and harassed based on their attire, religious affiliation and sexuality. And, in events that mirror the protest from two weeks ago, it was other students, not the university, who came to their aid.

Counter-protesters rallied with handmade signs and pride flags, in a display of inclusivity and solidarity university administrators praised. Similar demonstrations have taken place at other universities in the greater Philadelphia area, including Towson University and at the University of Maryland.

Just like the University of Delaware’s administration, other public universities’ leadership in the area have struggled with how best to respond before, after and during these incidents.

The Key of David Christian Center and its leader, Pastor Aden Rusfeldt, draws varied responses, with some administrations saying they would prefer if students did not give the protestors a platform by engaging with them and others warning students of the group’s impending arrival in order to effectively organize counter-demonstrations.

On most campuses, counter-protests materialized spontaneously, with students rallying around one another in the face of targeted hate speech.

This advocacy displayed by students on behalf of one another and themselves was evident on our campus throughout the events that occurred two weeks ago.

We want to commemorate the students who took the initiative to stand up for one another in the face of such an overt display of intolerance and hate. Students who scrawled signs of support and made every effort — from playing the bagpipes to banging pots and pans — to drown out the despicable comments, threats and accusations being hurled at them are admirable, and their actions deserve to be celebrated.

As do those who protested on Oct. 12 in solidarity with a fellow student who was allegedly brutalized by a member of Kappa Delta Rho Fraternity on Oct. 8. The university has since responded to the incident; however, even before the statement was released, members of the student body marched, demanding accountability for the alleged crimes of Brandon Freyre as well as action to guarantee student safety on campus.

In light of the university’s regrettably lacking response, it is refreshing to see that our student body is one that rises to the occasion and is willing to stand together for what is right.

Demonstrations of solidarity such as these remind us that we, as students, do have the power to create and foster an inclusive and safe atmosphere for one another, with or without support from the university’s administration.

The Review’s weekly editorials are written to reflect the majority opinion of The Review’s staff. This week’s editorial was written by Clara Kinken, copy desk chief. She may be reached at ckinken@udel.edu.