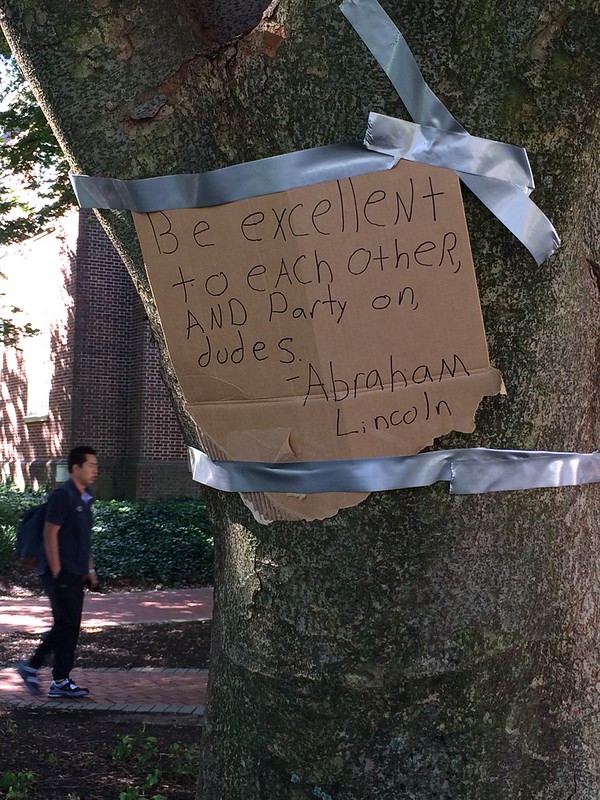 While many Americans desperately cling to their right to free speech, we often fail to utilize another privilege afforded to us by the First Amendment: the right to assemble. Words can make waves, but they can easily be washed away by a storm of impassioned individuals united under a common belief or goal.

I love a good protest, especially ones that happen here at UD. Doesn’t necessarily matter to me what the protest is about; there is something notable about a group of students and community members sacrificing time from their schedules to congregate on campus.

This act is particularly noteworthy on our campus. Many would agree that our student body is not the most engaged, in terms of political or social justice causes. Student groups struggle to maintain regular attendance among their membership at meetings, while academic departments frequently seem desperate to fill seats at guest lectures. Bottom line: it can be difficult to get UD students to attend non-mandatory extracurricular activities. This is why I am pleasantly surprised whenever I see a protest come to fruition.

To participate in a protest requires courage. Participants publicly stand beside peers–often friends, but sometimes strangers–as the silent majority walks past and merely observes. They all expose themselves to potential judgment and criticism, yet they stand together. I deeply admire all the peers of mine who have chosen to exercise this right in the many social movements that have manifested in recent years.

Until this week, protesters at UD have typically been treated with respect or impartiality. Unfortunately, Katie Pavlich’s visit and the protest surrounding it incited a different response. While the protest itself was peaceful, members of the UD community (including myself) faced attacks on social media by Pavlich and her followers, condemning us for voicing our opinions of the event and for supporting the Black Lives Matter movement. As if that weren’t discouraging enough, what appeared to be a racist display of nooses appeared in front of Mitchell Hall last night, not 24 hours after the peaceful protest had been held in that very location.

I fear that this perceived act of hatred and intolerance may deter students in the future from organizing and engaging in protests. While the display was deemed by authorities as the remnants of decorations and therefore not a hate crime, I’m still worried that the already small percentage of students willing to assemble will grow discouraged and dwindle. On the contrary, I would hope that this incident highlights the sheer magnitude of attention (whether it be positive or negative) that protests can provide for a cause.

As our school makes headlines this morning, I would encourage members of the UD
community to utilize all aspects of our First Amendment rights. Share posts on social media to raise awareness. Use the hashtags #BlackLivesMatter and #TheRealUD to stay connected with the movement. Physically meet up with your classmates in a coffee shop to engage in constructive conversations. Join the UD community at Mitchell Hall this afternoon.

There is power in numbers. Keep standing together, UD.