Faculty Senate calls for greater transparency in search for Provost 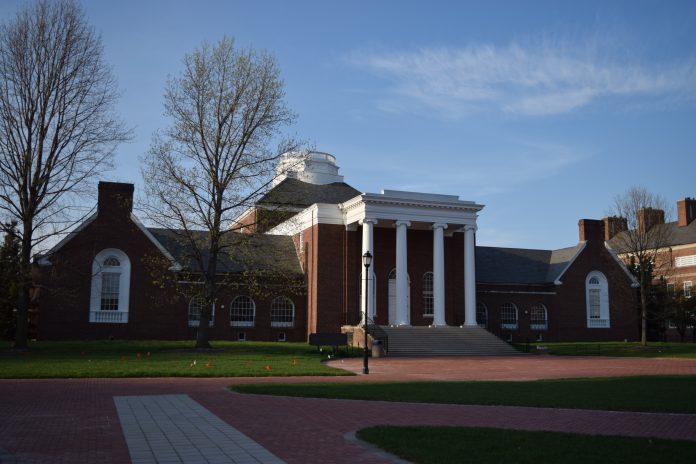 On Dec. 6, the faculty senate passed a resolution calling for greater transparency in the ongoing search for the university’s next provost. Authored by John Morgan, an associate professor in the Department of Physics and Astronomy, the resolution requests that the search committee adhere to previous regulations limiting the confidentiality of the process.

The provost, a position currently held by Dr. Robin Morgan, is responsible for “administration of all programs of instruction, research and service, promoting collaboration among the colleges and across disciplines, and for facilitating the success of the University’s faculty and students.”

The Provost Search Advisory Committee held a total of five virtual forums in November to gather input from the campus community on qualities they would like to see in their new provost; two for faculty, one for students, one for staff members and one for the broader university community.

However, the candidates for provost will not be required to conduct campus visits and engage with students and faculty.

“The process that we run is going to be confidential in nature,” Assanis said. “The reason I do believe this is a right call for provost level searches is very simple: I think this is what’s going to get to our campus the best and strongest qualified candidates to consider this opportunity.”

John Morgan believes this is inconsistent with Section 2.6 of the university faculty handbook, which encourages an “open and transparent search for academic administrators.” Although this section of the handbook recognizes that the early stages of the search process may remain confidential, once a final list of candidates is determined the process should be “open and engage the full academic community.”

His proposed resolution requested the university administration and search committee to adhere to the guidelines outlined in this section, and allow the final list of candidates to visit campus to engage with students, faculty and staff.

“All that this resolution is doing is respectfully requesting that the people conducting the search follow as best they can the requirements and recommendations in this section of the faculty handbook,” John Morgan said. “And in particular, I believe it is reasonable to say that if there are external candidates who are put on a shortlist, and they want to make a campus visit, they should be allowed to do so.”

Fred Hofstetter, professor in the School of Education, disagreed with the second half of the resolution, saying that the faculty should put their faith in the appointed search committee.

“I think we need to trust the search committee about this,” Hofstetter said. “They know that the policy in the faculty handbook talks about the dynamics of making a search public or not. And I think we should trust them to do what is in our collective best interest. If keeping the search private means that we can get another provost of the quality of Robin Morgan, that will be tremendous for the search committee to accomplish.”

Hofstetter attempted to amend John Morgan’s resolution to state that the faculty would entrust the search committee to decide the extent to which the process should remain confidential.

The Provost Search Advisory Committee is currently chaired by Gary Henry, dean of the College of Education and Human Development, and Cathy Wu, Unidel Edward G. Jefferson chair in engineering and computer science. Henry also serves as a non-elected member of the Faculty Senate.

Henry pointed out that asking candidates to make their candidacy “public knowledge” will create an unfair advantage for those willing to do so over those who are not.

“I think that’s inherently an inequitable process, because the candidates who don’t opt to participate will be held in suspicion, while the candidates who do come forward will appear to be having greater support for transparency and willingness to participate in the process,” Henry said. “To have it known that they’re a finalist for a provost position elsewhere could greatly affect their own credibility on their campuses.”

Daniel Stevens, professor in the School of Music, disagreed with Hofstetter’s reference to current Provost Robin Morgan as the type of candidate who resulted from a confidential search, noting that she had been a member of the university community for years prior to becoming provost. While Robin Morgan became provost in 2018, she had been employed by the university since 1985.

John Morgan agreed with Stevens, saying that a true example of a provost obtained from a confidential search would be Domenico Grasso, Robin Morgan’s predecessor, who stepped down for “personal reasons” in October of 2017.

“I would say that if you want to make a more apt comparison of what you are likely to get in a very confidential search for provost, the better comparison is with Domenico Grasso, who I consider a friend,” John Morgan said. “But unfortunately, he had a rather abrupt manner of operating, which I think unnecessarily made a lot of people unhappy, and may have hastened his departure from the university.”

Hofstetter clarified that his amendment was not requesting a confidential search, only that the Faculty Senate express their trust in the search committee.

After extensive debate —  and some technical difficulties during the vote — the amendment ultimately did not pass, and the senate returned to discussing the initial language of the resolution.

Assanis rejoined the conversation, claiming that the confidential search that resulted in the selection of Robin Morgan as provost adhered to Section 2.6, and so would the ongoing search.

“65 different individuals who represented all constituencies within the campus met with the people … so it was not an open search in the sense that we put on the web and social media, but clearly it was a search where all the representative constituencies were consulted,” Assanis said. “We had six very qualified finalists, of which several became provost that very same year after our decision was made. And Robin clearly came to the top through this process, this hybrid process, the best candidates indeed applied, we will not compromise to have a reduced set.”

John Morgan disagreed with the notion that a hybrid process produced the best candidates.

“If you’re running a hybrid search, not more than about 20 faculty will be meeting with the shortlisted candidates, and not more than about 20 students will be meeting with the shortlisted candidates,” John Morgan said. “And it could be a smaller number that will exclude 98% of the faculty from having any meaningful input into the selection of our next provost. It will also exclude 99.9% of the students from having any meaningful input. And I would find that highly inequitable. I’m far more concerned about treating my faculty colleagues and our students equitably, then people who already have pretty good jobs at other universities.”

​​”I would like to point out to people that the provost is traditionally thought of as the chief faculty officer on campus,” Boncelet said. “And as such, I think the faculty should be involved in the selection of the next provost, involved as much as is practical in today’s world.”

Galileo, who was a member of the committee that established Section 2.6, said that a good candidate for provost is one who will want to engage with the faculty before accepting the position.

“I’d like to say that I just can’t imagine wanting to be provost of, you know, 1300 faculty and not coming in with their confidence, which you would never be able to do unless you came openly and you allow whatever faculty members that wanted to engage you engage you,” Galileo said. “And it’s just impossible to gain the confidence of the faculty with a limited, very limited number of faculty being able to interact with them. And I think that that’s coming in with a black mark against them. And sometimes it might be impossible to overcome.”

The resolution passed with 69% of the senate in favor.