Farewell, from the editor 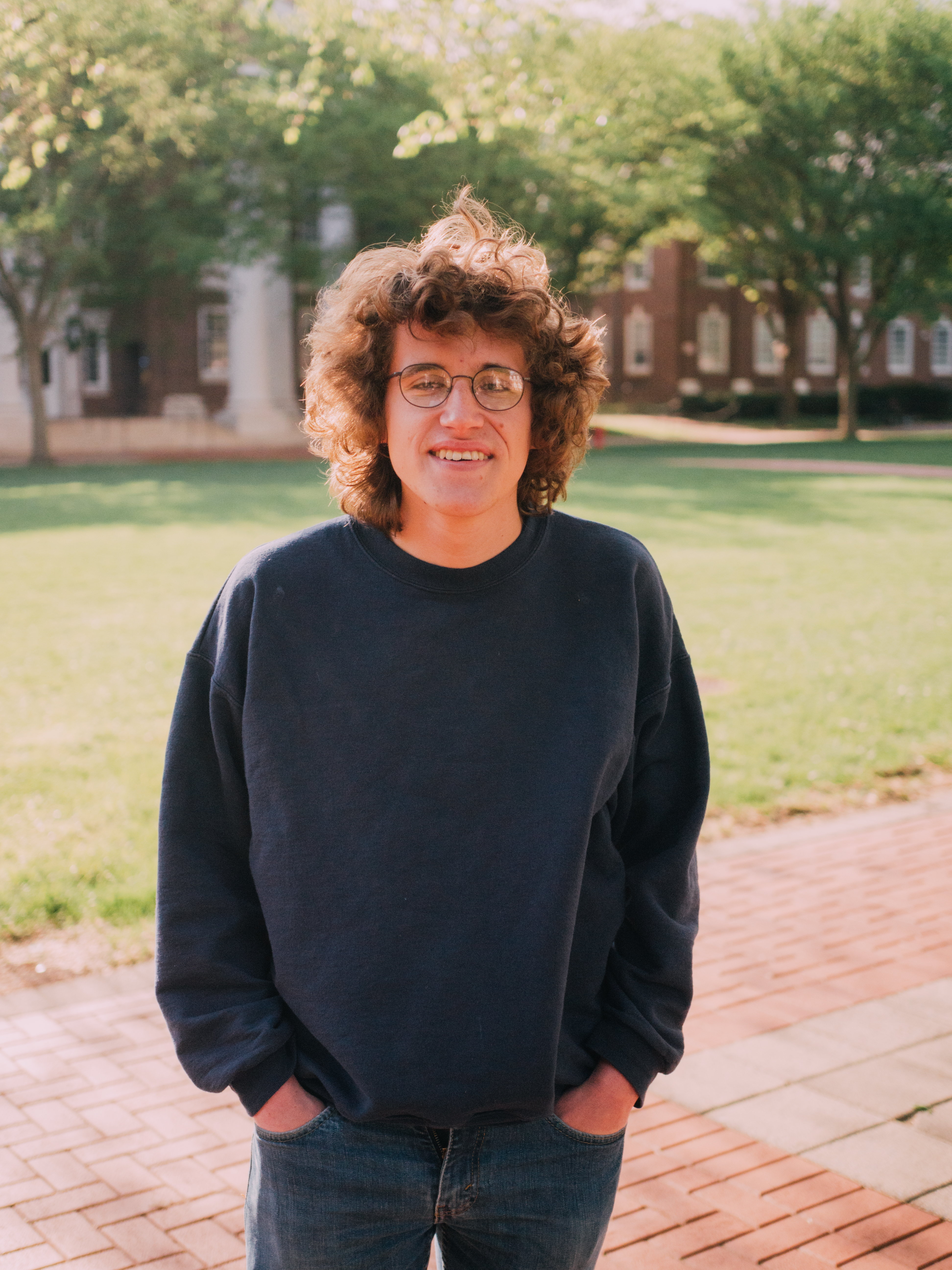 Three years ago, a bone-thin, curly haired Hoosier Boy in a Hawaiian shirt strolled up the the second floor of the Perkins West Annex, wielding a sweet potato and itching to raise some hell.

And, for the past three years, hell has risen. My reputation, and perhaps that of the newspaper, may have fallen in the process, but we’ve done so gloriously, unapologetically and, of course, with seething contempt for students, faculty and administrators alike.

I say hell intentionally, because we do inhabit a hell of sorts (or at least the closest approximation of it we’ve yet conceived). Imagine a world of deception, where overeducated, overpowerful people lure unwitting youngsters from across the country into their wicked, unfathomably pointless domain, dangling promises of employment and prosperity and unregulated inebriation (only the third promise being fulfilled) before them, only to kick them out four years later, depressed, drowning in debt and unable to write (much less utter) a coherent sentence.

It all happens in the service of keeping a dark, nihilistic world — one relying on hypervain ceremony, the incessant gratification of unearned egos — alive with money and a veneer of purpose.

For some reason or another — whether conviction, hatred, excitement or the sheer, unmatched pleasure of being universally despised, I’m not sure — I’ve taken it upon myself to do something about it, to try to make some changes in this soul-sucking pit of apathy.

I think I’ve had some success. Working alongside the other valiant members of this newsroom, we’ve ended careers and uprooted policies, pissing off everyone from students to administrators in the process. Week after week, we’ve followed both hard-hitting and mundane beats, keeping our local and campus institutions in check, provoking thought, telling student stories and holding the university accountable. Through poor and inspiring leadership, through strong issues and very embarrassing ones, I’ve had the pleasure to work each week with the most interesting, intelligent and veritably insane people on campus.

Six semesters, over 100 written articles and thousands of edited ones later, there is not a single moment that I regret.

And now I’ve decided to step back. Thrilling as it has been, there are realities — facing this newspaper, this particular editor and college life in general — that made returning a bad idea. It’s a decision that I’ll surely regret, but one that I hope will ultimately allow me to spend next year helping to address some grave challenges facing The Review, and student newsrooms nationwide, today.

It is, after all, an extraordinarily difficult time to be a student. The pressures to excel, to build meaningless resumes and maximize GPA’s, have never been higher. Nor have the rates of depression and anxiety. Enslaved to Sallie Mae and with no clear direction, students are, for the most part, tragically screwed.

That is, being a student journalist — with the additional, unpaid workload; the constant pressure and criticism; the bleak job prospects; the dwindling awareness of what a newspaper even is — has never been a worse idea. Many realize this only upon committing to positions in our newsroom.

Yet student journalism has never been more essential. I had the fortune to enter college at an exceptionally exciting time, when new administrations were entering both Hullihen and the Oval Office. And as I’ve learned, both here and nationwide, the need for information, for storytelling, for radical ideas, for truth, has never been more urgent. As universities like our own continue to barrel forward with childlike ambition, neglecting student concerns and well-being in the process, and as misinformation runs rampant locally and nationally, as lies circulate and cruelty perpetuates, students, and student journalists in particular, have a vital role to play.

But they too often do not. I am convinced that the greatest threat to free speech is not, as many hold, liberal oppression, but rather bare indifference, owing to the voluntary numbing of civic interest and engagement among students, whether via textbooks or booze.

That leaves student newsrooms, staffed by a few paranoid nerds with coffee addictions, to pick up the slack. It’s debilitating work, a vocation that requires sacrifice and sleeplessness. It is the most extrinsically unrewarding job on campus, the one arena without a recognition welfare apparatus, a place where criticism is constant and appreciation always absent.

But, of course, we thrive on this stuff, and with a good dose of conviction, a commitment to something beyond yourself, you can subsist. For the past three years, I’ve allowed a hatred for injustice, an inability to sit idly by and an insufferably presumptuous belief that my thoughts are are worthy of publication to carry me through the weeks.

But — and I think I can speak for many others in the newsroom on this — there’s more to it than that. I’m frequently asked “Why do you hate everything so much?” to which I respond, “It’s really an expression of love.” At the core, the motivating force behind all of this has been the sincere belief that there is a whole lot here worth cherishing and preserving.

Each day I am struck by the wonders of this institution. There is a subtle, but enormously heartening, generosity among students. From the countless interviews with peers I’ve conducted, to the simple, non-obligatory “thank you’s” to bus drivers, to the strange, spontaneous acts of kindness witnessed among the most terrifyingly masculine of frat boys, I’ve learned that, while this place may not have a soul, it has a gentle, radiant heart. Many faculty and staff routinely exceed their job descriptions to help students and make the university a better place, and I tend to interpret their mostly unreasonable criticism of The Review as earnest concern. And I’m convinced that, although horribly, horribly misled, even my buddies in Hullihen care deeply about the university.

For myself, and for numerous others, this university has made new worlds accessible, opening minds and transforming lives. Each time I stroll down The Green, before reverting to my default grimace, I can’t help but to smile.

I’ve made no secret of my belief that these vestiges of virtue will not outlive my time here, and that the university is moving in a fatal direction. The need for this newspaper will only grow more dire, and I want to make sure the right people are running it. So, though you can rightly interpret my departure from editor in chief as a retreat into a quieter life, I won’t go too far. Next year, as our development officer, I hope to recruit the next generation of staffers, while also working with Jacob and Mitchell to help initiate changes that will be essential to The Review’s longevity, confronting the challenges delineated above.

Regarding those two — The Review is in good enough hands. What they lack in formal experience they compensate for in a work ethic and an understanding, if preliminary, of The Review’s mission. They will, of course, make mistakes, and you will, of course, be excessively harsh, as you should be. But you can expect The Review to continue telling student stories, holding power accountable and, indeed, raising hell.

I’m also leaving them in a pretty good spot. Brandon and I inherited a newspaper in its grave, and I think we’ve at least resuscitated it into a functional zombie. Our financial situation is the best it’s been in years. As is our website. Our online readership skyrocketed by 100% this year. We successfully brought fiction to the pages of Mosaic, and we finally formalized an opinion submission system. We gave the newsletter a reboot, appearing for all but several of this year’s issues. This semester and last, each week saw new, important stories being told on our pages. Our opinion section was alive with controversy, sparking discussion across campus. And, my personal pride and joy, we pulled off the Drunk Issue — gloriously.

But I can only claim partial responsibility. This year and the previous one would not have been possible without the work and inspiration of my predecessors. Those who, consciously or not, instilled this newspaper’s spirit in myself and so many others three years ago. To Meghan Jusczak, Ryan Barwick and Will Kebbe — thank you. For embracing a strange, cynical, bespectacled kid from Indiana and teaching him to use his foreignness to his advantage. This alone has meant more than you will ever know.

Also, a special thanks to Jacob Orledge, a friend, who beat me out for craziest person in the newsroom for a good year or two, and whose byline was beside mine for some of the most important reporting and editing this paper has done over the past decade. This year, on the many occasions that I found myself in the newsroom, alone, on the brink of losing it late at night, the words “How do you like your coffee?” filled my ears and led me down to Dunkin, carrying me through the night.

More immediately, to Ryan, Bridget, Meagan, Casey, Julia, Katie, Minji, Alex, Xander, Jenn and Olivia — pretty much everything that could have gone wrong this semester did, but we made it. From the bottom of my heart, thank you.

And a final thanks to our most devoted readers, those who are painfully aware of the problems described above, yet dedicate each waking day to a mission that might be in vain. The guidance of our journalism professors — in particular Professor Deborah Gump, Professor Deborah Howlett and Professor Mckay Jenkins — has kept me in check, teaching me lessons, related to both life and journalism (the two, of course, not so far removed from one another), that won’t leave with my position.

But, most importantly, we can’t do it without you. Your readership, your active engagement and criticism, keep us afloat and keep campus power in check. Keep sending your tips, keep picking up the paper, keep sending furious emails — it’s why we drive ourselves into the ground, week after week.

It has been an honor and thrill to serve as editor in chief of this newspaper, and I have you, our readers, to thank.

With the closest thing to a warm heart you’re gonna get,