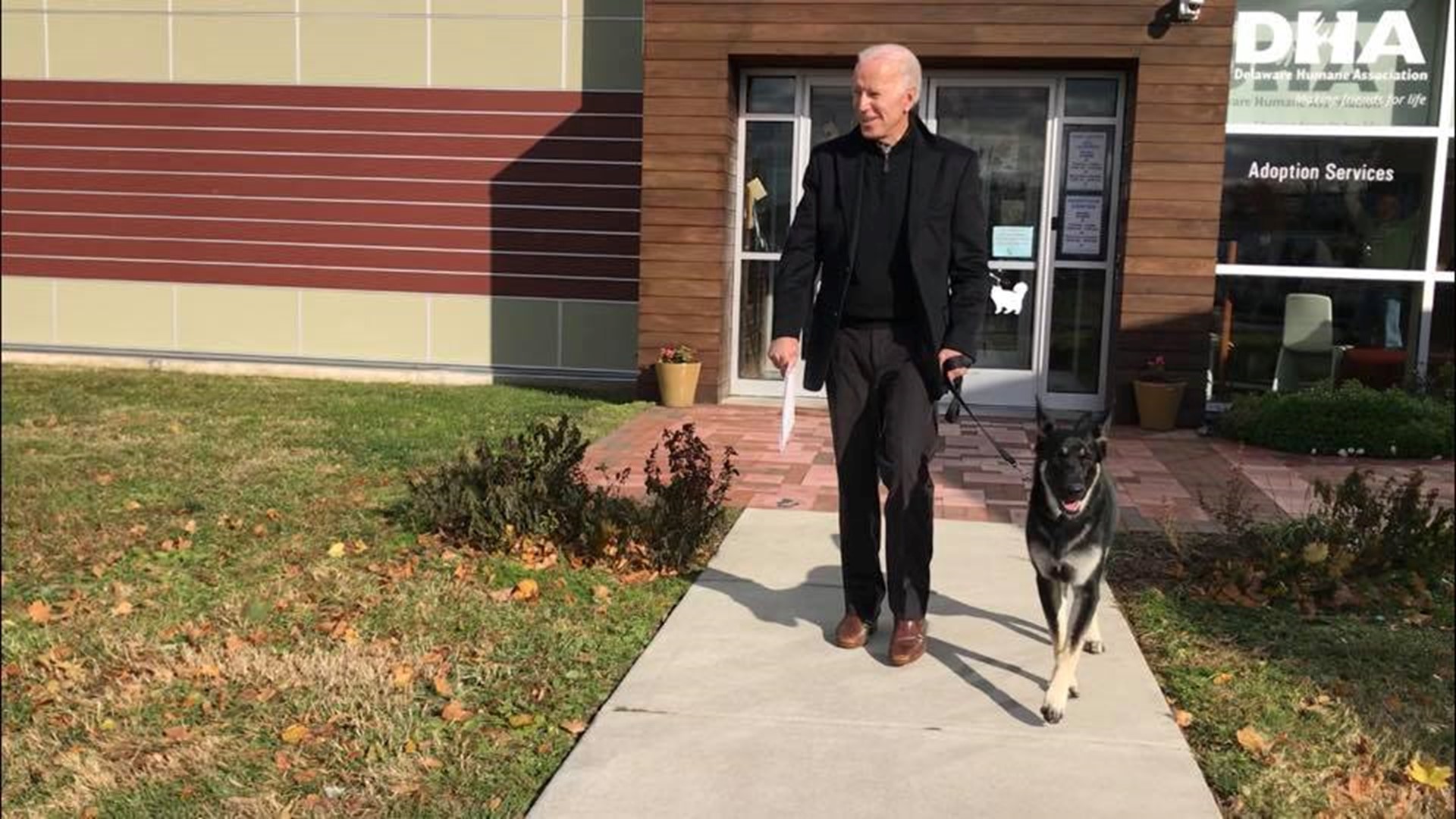 ​Courtesy of the Delaware Humane Association/THE REVIEW
​Two presidents in the history of our nation had rescue dogs as their White House “First Dog.” Former Vice President Joe Biden and his rescued German shepherd could be next.​

Two presidents in the history of our nation had rescue dogs as their White House “First Dog.” Former Vice President Joe Biden and his rescued German shepherd could be next.

Abraham Lincoln’s dog, a yellow mutt named Fido, was rescued when he had been wandering as a stray in his hometown of Springfield, Illinois. President Lyndon B. Johnson’s favorite dog, Yuki, was a white rescue mutt who had been abandoned by his owner at a gas station.

On Nov. 17, 2018, Biden walked through the doors of the Delaware Humane Association (DHA), a small animal shelter located in the city of Wilmington. He was there to finalize the paperwork to officially adopt Major, the dog he and his wife, Dr. Jill Biden, had been fostering. 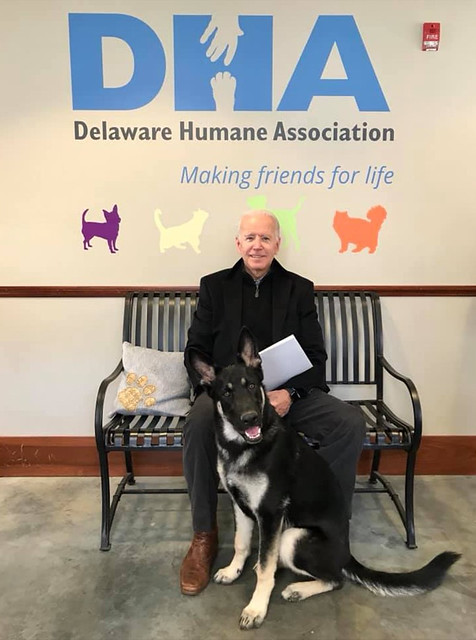 Major was one of six puppies brought to DHA after consuming toxic material in the home they were previously in. The puppies were brought to the local veterinary hospital but were abandoned once the owners realized the high medical expenses that came along with caring for them.

“They basically just left the dogs [there],” Cory Topel, the marketing manager of DHA, said.

The veterinary hospital then reached out to DHA and asked if they were willing to put out a “plea in the community” in order to help fundraise the costs of all of the medical bills.

The DHA quickly reached out to members of the Delaware community across all their social media channels to help raise funds for the significantly high medical bills. The fundraising was successful, and the puppies were saved.

Biden’s daughter, Ashley Biden, came across the social media post and sent it to her father. Joe Biden and Jill Biden, along with their apparent fondness for German shepherd dogs, filled out an application from the DHA and became foster parents. Months later, Major became an official member of the Biden household.

The workers at DHA said they got really attached to the litter of puppies, but to their surprise, Biden made sure to take some time for everyone to get a chance to say their goodbyes to Major.

“What the puppies went through was traumatic and scary,” Topel said. “They almost died. People at DHA got really attached to them, so [it] was nice that Joe didn’t just sign the paperwork, he hung around a little bit. Almost every staff member took a final photo with Major. It was sweet. It was special.” 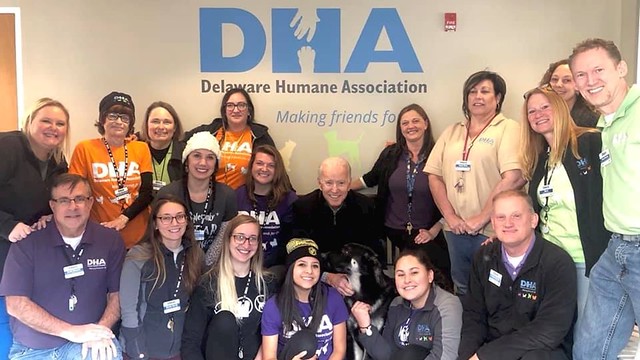 ​Courtesy of the Delaware Humane Association​/THE REVIEW
​Joe Biden with staff from the DHA on the day he formally adopted Major.​

Topel recalled the attachment of the staff to the litter of puppies once fighting for their lives.

“Having seen the litter of beautiful innocent puppies and what they had gone through, bringing them back full circle to get healthy and one of them ending up being adopted by the vice president of the U.S. is super exciting,” Topel said.

President Donald Trump is the first president in over 100 years without a dog in the White House. In the famous presidential “Choose your humans wisely” advertisement supporting Biden, Trump is on record, stating that he does not have time to take care of a pooch and said the idea seems “phony” to him. Additionally, in her memoir, former wife Ivana Trump wrote that Trump was “not a dog fan.”

The ad shows Trump at a rally, shaking his head, saying, “How would I look [while] walking a dog on the White House lawn?”

This statement prompted debates concerning whether or not Trump could be someone who actively dislikes dogs. The ad ends with a picture of Biden mesmerized next to his German shepherd, Champ.

“It’s what we [DHA] strive [for] when animals come to our care, strive to go above and beyond to ensure that every animal is truly shown love and compassion,” Topel said. “We shower our animals with love to the best of our abilities.”

Topel went on to further elaborate.

“I think it takes a certain type of person to take a stand and realize that animals have rights too,” Topel said. “It’s not a coincidence that people who love animals are often our leaders…there’s nothing like the love of an animal — so it’s no wonder that there is a correlation between [adopting pets and self care].”

The idea that a shelter dog like Major, who faced a sad reality in the beginning of his life, could one day end up in the White House as the “First Dog” is one that many are hoping becomes a reality.

“To say that Major had a second chance would quite literally be an understatement,” Topel said.

Topel commented on the fate of other shelter animals who, unlike Major, are not adopted.

“Unfortunately, not every animal out there will have a happy ending like Major,” Topel said. “Every animal out there deserves to find a second chance and loving home. Major is a testament and a poster child for rescued animals all over the world because no matter how neglected an animal can be, they can still have a happy ending if people step up and make the decision to adopt. And that’s what [we] advocate.”

The DHA does not receive any federal funding or grants; its operations are solely based on the generosity of its community. The DHA advocates for adoption, and emphasizes the fact that there are millions of homeless animals waiting to find a safe and loving home.

“Major was given this second chance, and the fact that now he may be the First Dog is just unbelievable,” Topel said. “Our hope is that if he ends up being in the White House, more people will consider adopting next time they want to grow their pet family.”

It is well known that Lincoln had a love for animals. Even snakes, according to the Presidential Pet Museum, deserved Lincoln’s compassion. When his mother asked him to kill a snake, he famously replied, “No, it enjoys living as much as we do.”

So, the question is: Is the nation willing and able to endure four more years of a White House without its First Dog?

Major, the sheltered German shepherd, has Joe Biden and Jill Biden as his parents, an outcome typically very unlikely for a dog who was once abandoned and in dire need of medical care. 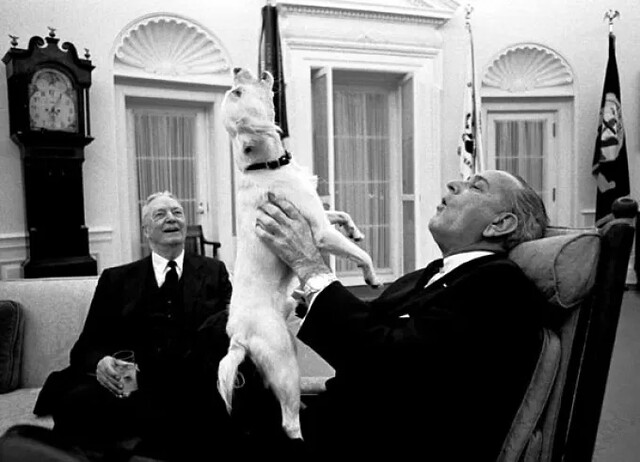 Courtesy of the Presidential Pet Museum and the White House/THE REVIEW
​Pictured are LBJ and his “favorite dog,” Yuki.​

Lyndon Nugent, President Johnson’s grandson said, “LBJ’s favorite dog [Yuki] shared a very significant bond that personified the American spirit: Only in America could a poor boy from Johnson City end up in the White House.”

According to Topel, Major could showcase the power of the possibilities of the nation: how a sheltered dog, fighting for his life, could end up as the nation’s First Dog.