From stage to the silver screen: What stars are saying about long-awaited “In the Heights” blockbuster 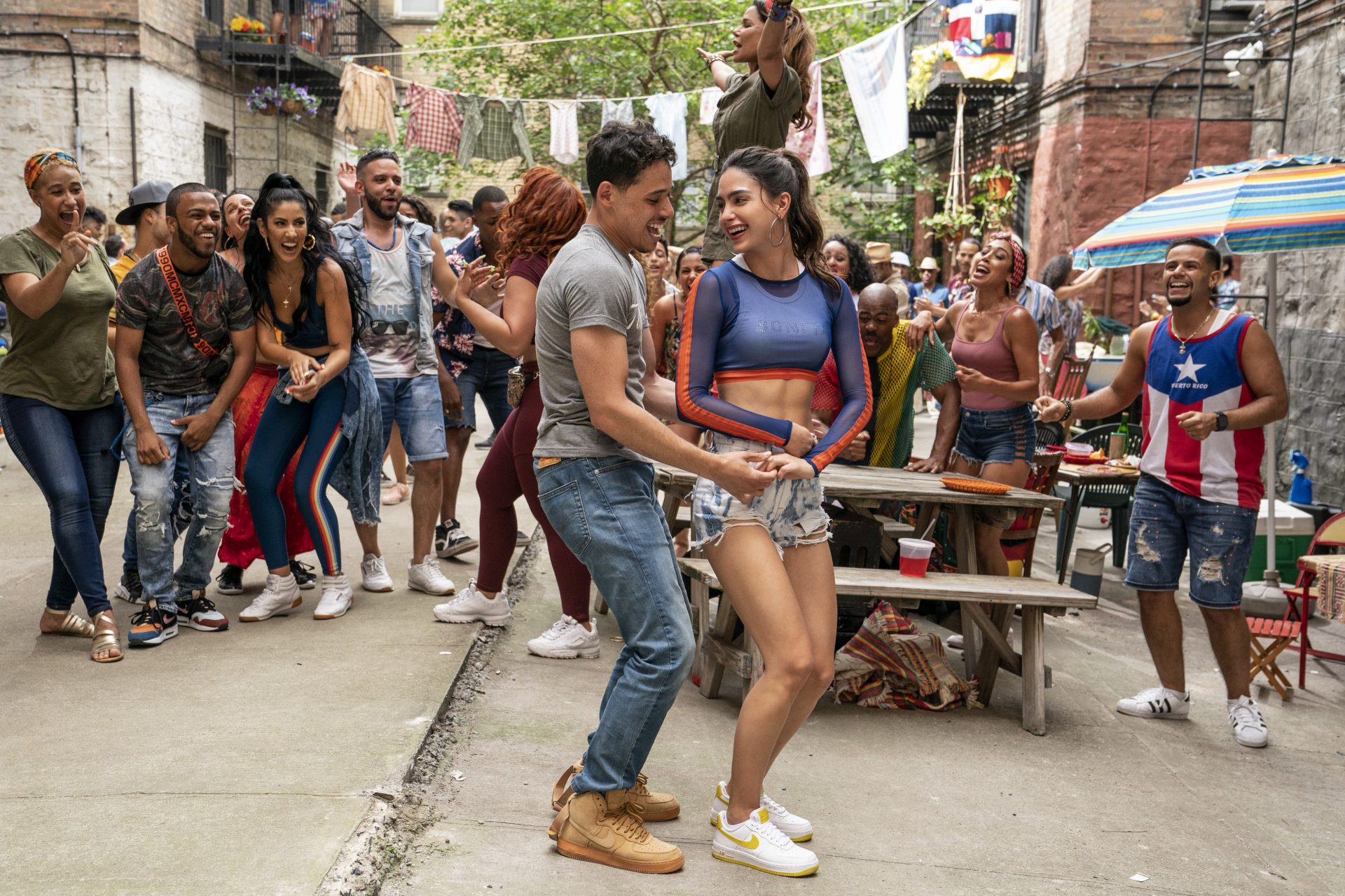 In 1999, long before audiences had ever even imagined the rap refrains of “Hamilton,” a yet-to-be-discovered Lin-Manuel Miranda was a sophomore at Wesleyan University. Inspired by Jonathan Larson’s rock stage show, “Rent,” and the Latin salsa and hip-hop on which he grew up, the young Miranda developed material for a musical set in his old neighborhood.

It took nine years for “In the Heights” to transition from Wesleyan to Broadway, with multiple hurdles and setbacks along the way. In 2004, playwright Quiara Alegría Hudes joined Miranda’s team of creatives and came on as a book writer who could help shape the bigger picture of the community while Miranda devoted himself to the songs for each character.

Once the story made its Broadway premiere in 2008, the vivacious performance changed the shape of American musical theater. The cast was diverse, their stories universal and the music instantly catchy  — a winning trifecta that earned “In the Heights” four Tony Awards and put Miranda on the map.

For the 2021 adaptation, Hudes adapted her book for the stage show into the screenplay, updating it, cutting some storylines, adding references to undocumented people and fighting for DREAMers. Miranda made a handful of changes to the music as well (including tweaking a line about former President Donald Trump).

The duo remembers the feeling of excitement and freedom in developing deeper and more complex characters and storylines. Hudes says that reapproaching the project had her reflect on her journey as an artist and storyteller.

“I felt a richer sense of knowledge going into the screenplays, I was hungry to take another crack at it,” Hudes says.

“It was very thrilling to get [Hudes’s] draft and then to work from there as the starting point,” Miranda says. “It created musical and dramatic situations I never would have come up with on my own and that’s the fun of making a musical — it’s making something greater than you could ever make yourself.”

On the patio of a bar on a palm-fringed, white-sand beach in the Dominican Republic, Usnavi (portrayed by Miranda on Broadway and by Anthony Ramos in the movie) tells a story to a group of children. The bar is called El Sueñito, or “The Little Dream,” and the name is a key to the themes of this exuberant and heartwarming musical.

“This movie is all about dreams,” Melissa Barrera, who plays Victoria, says. “It’s all about individual dreams and how every character is a dreamer. Being a part of this movie was a huge dream [for me], it was one of my many sueñitos that I’ve been wanting since I saw the show on Broadway 13 years ago.”

From the tropical tranquility of El Sueñito, the audience is then transported to the summertime swelter of Washington Heights, a neighborhood in the uppermost part of the New York City borough of Manhattan. Home to a vibrant and diverse Latin American community, the streets are surrounded by the Hudson River vistas and “made of music,” according to Usnavi. In the 20th century, immigrants from the Caribbean and other parts of Latin America — including Usnavi’s father, now dead, and the neighborhood matriarch Abuela Claudia (Olga Merediz) — were drawn by the promise of economic opportunity.

Some opened small businesses, like the bodega where Usnavi and his cousin Sonny (Gregory Diaz IV) spend their days dispensing café con Leche, quarter waters and other staples. Across the street is a livery cab service owned by Kevin Rosario (Jimmy Smits), who came to New York from Puerto Rico and poured his hopes into his daughter, Nina (Leslie Grace). The apple of his eye and the pride of the neighborhood — “the best of us,” as Kevin says — Nina is a student at Stanford University.

“I really do think Nina is the closest to the bone for me in terms of what my lived experience was,” Miranda says. “So much of Nina’s story is about navigating and acknowledging the sacrifice that your parents are going through, even beyond the practicalities of paying for school. We really worked on that, me from the music side and [Hudes] from the dramaturgical side, to bring out that nuance.”

In the film, Nina returns home for the summer yearning to reinstate her identity as a Latina after her year at the dominantly white Stanford. At the same time, Usnavi remembers his childhood in the Dominican Republic as the best time of his life. His dream of returning home navigates through the parallel love stories in the Heights.

“In the Heights” is still about a community that knows trouble going through a three-day blackout in the heat of summer. However, what cinema affords so readily to its storytellers is the ability to visually build a full, richly layered world in a way you really can’t do onstage.

The filmography not only immerses the audience in the real Washington Heights but also into a dreamland. In one scene, lovers Benny and Nina step off a tenement fire escape and pirouette up and down the walls of the building in a sweet and thrilling defiance of gravity.

Grace called her stunt with Hawkins “magical” and “an illusion.”

“It’s crazy how [Chu] shot it but on a bigger scope, it shows that if they want to defy gravity and change the rules, then they can do that and so can you,” Hawkins says.

An exception to the backdrop of illusory performances is the people and places of the Heights that bring the story back down to earth and to life.

Take the salon, for example. Shelves of wigs animatedly bounce to the beat of a huge production number as the salon ladies gossip (“No Me Diga”). But even in a magical place like the Heights, these spaces are tangible and help communities of color come together.

A Dominican-American who grew up in the neighboring city of Brooklyn, Dascha Polanco, who plays Cuca, says that she and her fellow actors drew inspiration for embodying a culture of togetherness from lineage; family members who came before them.

“[Being in a salon is] a therapy session,” Polanco says. “It’s one of the pillars in our communities, a moment for us to not only beautify but to express ourselves, as a safe place for us to feel at home and belong.”

A musical number that pulls both at this familiar history, as well as heartstrings, is “Paciencia y Fe,” a piercing reminiscence of the past sung by Abuela Claudia. Nearing the end of her life, she recalls her emigration from Cuba as a young girl in the 1940s. There is bitterness in the memories of what followed, alienation and hardship to go along with the patience and faith. As she sings, dancers in flowing linen robes and head-wrappings spin and lunge in vintage subway cars.

Winning a Tony for her original Broadway performance as Abuela, Merediz speaks on her own experiences as an immigrant in relation to her character.

“Sometimes as an immigrant, you have to just kind of plow ahead,” Merediz says. “And you kind of have to swallow what you went through. [This song] is everything that [Abuela] had to go through but she also had to kind of squelch in order to move ahead and prosper.”

In spite of the struggles immigrants grapple with, the cast found it gratifying to be able to share these experiences with a universal audience.

“I love representing my country, I raise my flag high and I’m very proud to be Mexican,” Barrera says. “But I think it’s a very intense struggle with children of immigrants that feel torn between two countries. It’s a very real struggle that a lot of people go through and hopefully people see themselves and feel less alone.”

“In the Heights” makes the case that there are hundreds of stories worth telling about this community, and we should celebrate them all with pride, song and dance. While stories of Latinx, Black and brown communities are not told often in popular culture, being represented and celebrated culturally may be the next big step for film moving forward.

“It goes to show this can work. These stories do work,” Polanco says. “There’s a yearning for it, and a need and necessity so it’s so necessary right now. So the question is, when’s the next?”

“In the Heights” premiered in theaters and on HBO Max on June 11th.