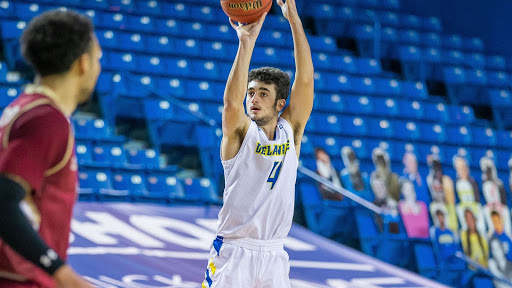 The 6’6” freshman guard has taken no orthodox path to land with the University of Delaware men’s basketball team. From Italy to New Jersey to Delaware, the 19-year-old Gianmarco Arletti is no stranger to adapting into a new climate.

At 16 years old, Arletti moved from his hometown of Bologna, Italy, to the United States. He enrolled at Holy Cross Prep Academy in Delran, New Jersey before his junior year of high school.

Arletti noted that after putting together a highlight video of his basketball play from overseas and showing his grades and transcripts, Holy Cross became the best choice for his education and his basketball career.

As with any long-distance move, cultural differences are sure to be prominent. Arletti experienced culture shock in more areas than just basketball when he first came to America.

“It was a total difference from the food [to] the language [to] the people over here,” Arletti said. “The school system and the basketball season were [also] different.”

After a few months, Arletti said the cultural transition and daily life in America became easier for him. On the court, it seemed like the Italian native never missed a step, but adjustments were necessary.

“I had never played point guard before,” Arletti mentioned. “In my first game, I had a lot of turnovers because I wasn’t used to [on-ball] pressure, so I definitely had to work on that.”

In his junior season with Holy Cross, he averaged 17.2 points, 4.5 rebounds and 3.6 assists per game. The summer following, he played in the FIBA 3×3 U18 Europe Cup Qualifier for his home country of Italy.

Despite having only played one year of basketball in the United States, Arletti signed on during November of his senior year to come play for the Blue Hens and Coach Martin Ingelsby.

Meanwhile, the soon-to-be Blue Hen put up another impressive season during his senior year. Arletti finished with 16.3 points, 6.5 assists and 5.1 rebounds per game, nearly doubling his assist average from the year before.

The end to his senior year was anything but normal, though, with the outbreak of the coronavirus pandemic. Back in Italy, a full lockdown was instituted on March 9 to slow the spread of the pandemic.

Arletti’s entire family in Bologna contracted COVID-19 during this time — fortunately, they all recovered. Additionally, he was able to stay in contact with his family during the outbreak and onwards.

“I talk to [my family] on a daily basis, through the phone, and see how they’re doing,” Arletti said. “[Plus] they are able to watch [my games] most of the time.”

Fast forward nearly one year, and Arletti’s basketball profile is evolving tremendously, even with the pandemic ongoing. Despite the limitations of practices and workouts for the team, his time as a Blue Hen began this summer alongside fellow freshman and forward Andrew Carr.

“At the beginning of July, Marco moved in with me for [a few] weeks, and I was able to play and workout with him a decent amount,” Carr said. “We were really able to bond and get to know each other.”

It was not until the fall that the two freshmen could begin full team practices in preparation for the delayed non-conference schedule. By early December, the two finally saw the court in live game action.

During Delaware’s five non-conference games, Arletti only played a total of 23 minutes. However, his role dramatically increased when senior point guard Kevin Anderson went down with an ankle injury two minutes into the team’s first conference matchup against Charleston.

Arletti stepped in and led the team to victory by way of 21 points on 8 of 13 shooting in 31 minutes of action. The next day, he played for 30 minutes and tallied seven points with three assists.

Ever since this breakout weekend, the freshman point guard has been consistently involved in the team’s bench rotation. In the seven games since, Arletti is averaging 19 minutes on the court.

“It feels great [to] have a crucial role on the team right away, and to be able to take advantage of [that opportunity],” Arletti said.

Through the trials and tribulations of moving overseas, learning a new position and playing during a pandemic, Arletti has found himself making an immediate impact with the Blue Hens.

Amidst altered practices and workouts, he has found success on the court with Delaware, and his teammate Carr points to his impressive work ethic as reasoning for that success.

“He really puts in a lot of work, and that’s something he has done since day one here,” Carr said. “He works super, super hard, and it [has] paid off.”