Grant continues to serve as trustee despite sexual harassment allegations

Jacob Orledge/THE REVIEW
Stuart Grant, a trustee at the university, is accused of sexual harassment at his law firm by a former partner and his confirmation to a second term as a trustee is in limbo as a result. His Wilmington, Delaware residence, shown above, prominently displays a statue of a gorilla and multiple horses on his front lawn.

Stuart M. Grant, who serves as a trustee for the university, remains as the intended namesake of the proposed graduate college 103 days after the university and the governor’s office were notified that Grant is facing allegations of sexual harassment at his law firm.

On March 6, The Review published a report revealing that top Democratic donor and current university trustee Grant is facing claims that he has sexually harassed female associates at the Wilmington law firm, Grant & Eisenhofer, which he co-founded in 1997.

The allegation stems from a lawsuit that Grant had filed against a former partner at his law firm, Reuben Guttman, regarding a dispute over a client. In a motion to dismiss the suit, Guttman accused Grant of sexually harassing female associates at the law firm. At the time of publication, the lawsuit has yet to be resolved.

In November 2017, the university announced they would be naming a newly established graduate college after Grant and his wife, Suzanne, following their ten million dollar donation. The graduate college still needs to be approved by the Faculty Senate, which is slated to vote on the proposal on May 7.

At the time of publication, Grant remains a member of the Board of Trustees. The university, which was made aware of the allegations against Grant back in January, has consistently declined to state whether they still intend to name the proposed graduate college after Grant and his wife.

Eight positions on the Board of Trustees are nominated by the governor for six-year terms and are later confirmed by the Delaware state Senate. The remaining twenty positions are nominated and elected internally by the members of the Board.

Grant was first nominated to join the Board of Trustees in 2011 by then-Gov. Jack Markell. His six-year term expired in 2017. Current Gov. John Carney renominated Grant for a second term as a trustee in January. The next step would have been for the Executive Committee of the Senate to schedule a confirmation hearing for Grant.

That changed when President Pro Tempore of the Senate David McBride became aware of the allegations surrounding Grant.

“[McBride] has called for an investigation into the allegations against Mr. Grant and will not be moving forward with a confirmation hearing until that has been settled.” Mat Marshall, Communications Director for the Senate Majority Caucus, said on behalf of McBride when reached last week.

The Senate does not have the power to send the nomination back to Carney. The Executive Committee can vote to confirm or reject a nominee or refuse to vote on the nominee at all.

“We can’t send a nominee back,” Marshall said. “We have to wait for the governor to submit a different one.”

Carney’s Communications Director Jonathan Starkey declined to comment on the governor’s intentions in regard to the future of the nomination when contacted last Friday.

Although McBride has called for an investigation into the allegations against Grant, he has not specified who should conduct this investigation. The Senate does not have the power to remove a trustee from the Board.

“There is nothing we can do to remove Mr. Grant from his position,” Marshall said.

There are a limited number of circumstances under which a trustee can be removed from the board, according to university bylaws. The trustee can resign voluntarily, and if a trustee is charged with a felony, they are automatically placed on leave. If they are convicted of a felony, they are considered to have automatically resigned their position. The board can also vote to remove one of its own members by a two-thirds vote.

There is no established procedure in the university bylaws for a trustee’s conduct to be investigated.

Grant will continue to serve as a trustee on an expired term indefinitely unless the governor nominates a replacement or McBride decides to move forward with Grant’s reconfirmation hearing.

“Trustees appointed by the Governor remain in office with full authority until formally reappointed or a successor is named,” according to an official university statement provided by Director of External Relations Andrea Boyle Tippett.

The University of Delaware chapter of the American Association of University Professors (UD-AAUP ) provided a statement in regards to the situation.

“The University of Delaware chapter of the American Association of University Professors (UD-AAUP) wholeheartedly condemns sexual harassment and believes that any credible allegation of sexual harassment should be taken seriously and investigated,” The UD-AAUP statement said. “UD-AAUP supports efforts that aim to end the harms caused by sexual harassment to individual members of the University of Delaware community. We aim for a community of trustees, administrators, faculty, staff, and students working with one another on the basis of dignity and mutual respect. We also believe that the behavior of the leaders of any organization should be above reproach.”

Interim Provost Robin Morgan indicated at a March 5 Faculty Senate meeting, 46 days after the university was made aware of the allegations against Grant, that the administration intended to move forward with the proposed graduate college. Her presentation indicated that the university intended to accept the $10 million gift from Grant and his wife and operate under the Grants’ gift agreement. This intention was repeated at the town hall meetings that Morgan held in April to gather community feedback about the proposed graduate college.

The Review recently reached Grant at his residence for comment on the situation.

When asked, Grant declined to note any specific factual inaccuracies in The Review’s reporting before slamming the door in the reporter’s face. 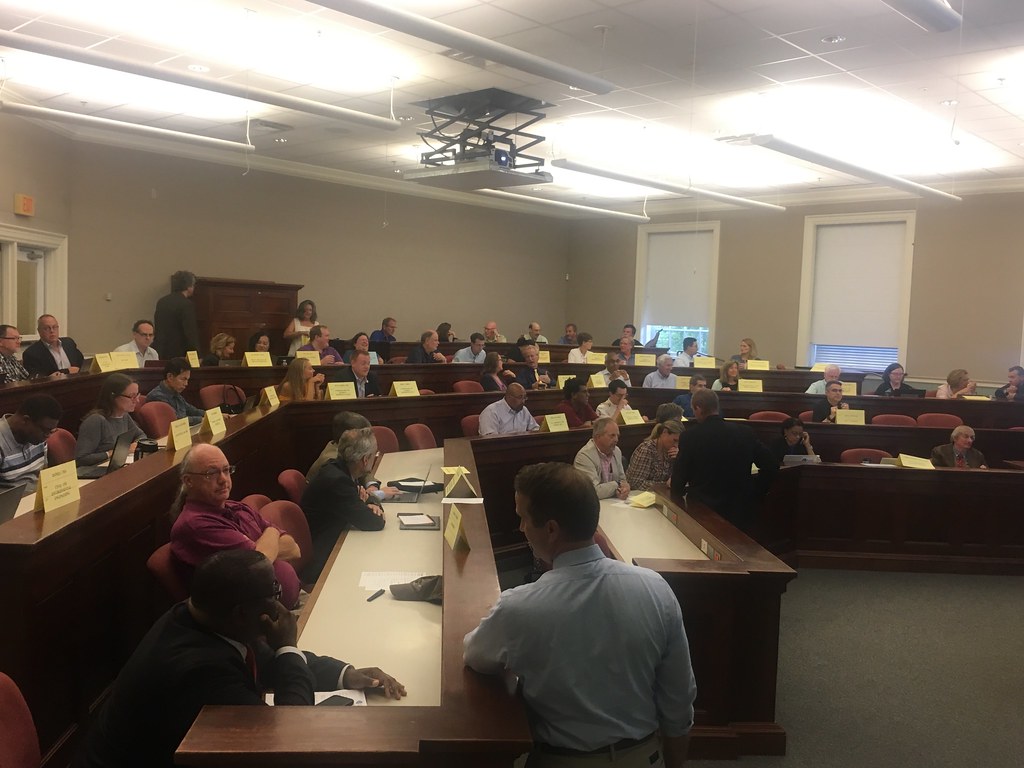 The Faculty Senate reconvened Sept 9. for a rip-roaring, roller-coaster-ride of a meeting.