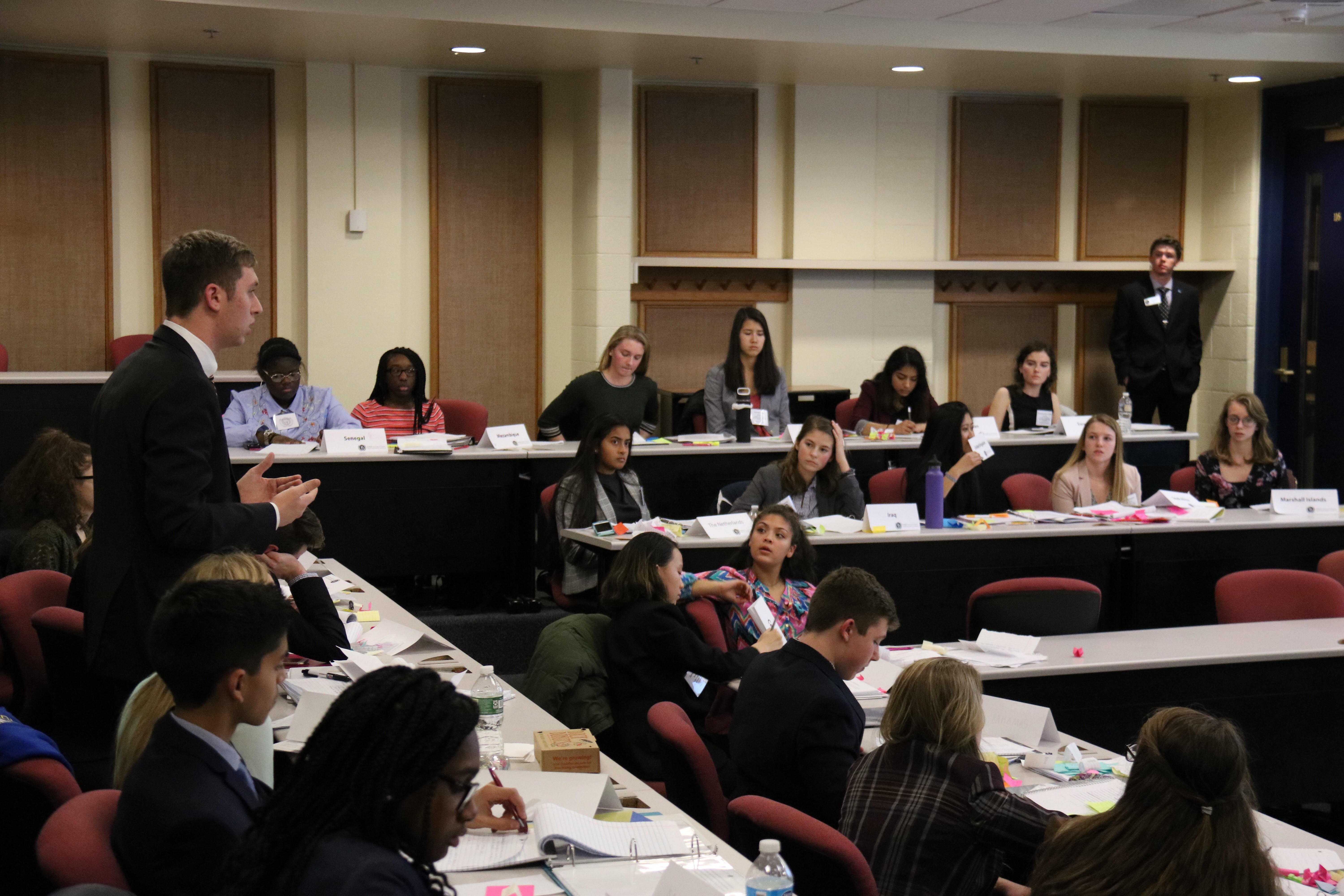 Delegates whisper violently as flurries of notes fly cross the chamber. Placards shoot up to debate sanctions on North Korea, who has just launched missiles into the Gobi Desert. Suddenly, United Nations peacekeepers storm in, detaining the Kazakhstan delegation for its role in the murder of a Swedish prince. The United Nations Security Council carries on, as Ukraine combats measures to preemptively instigate global war.

Of course, the United Nations (UN) did not have any meetings scheduled on Saturday. But high schoolers from across the east coast, ranging from Newark to Connecticut, picked up the slack, participating in the university’s sixth annual student-run Model United Nations conference, known as HenMUN.

Like all Model UN conferences, HenMUN involves the formation of various committees and delegations, simulating UN debate and working to draft resolutions. Months in advance, high school students are provided with topics relating to international conflicts, asked to write position papers and research their respective countries. The debates concern economics, human rights and other global issues, adhering to UN protocol and decorum. Delegates stay for the weekend in nearby hotels, where the action continues with late-night crisis committees.

But underneath what appears to be a seamless, three-day conference is years of work from university students who, in collaboration with the Department of Political Science and International Relations, have watched the conference grow since its inception six years ago. 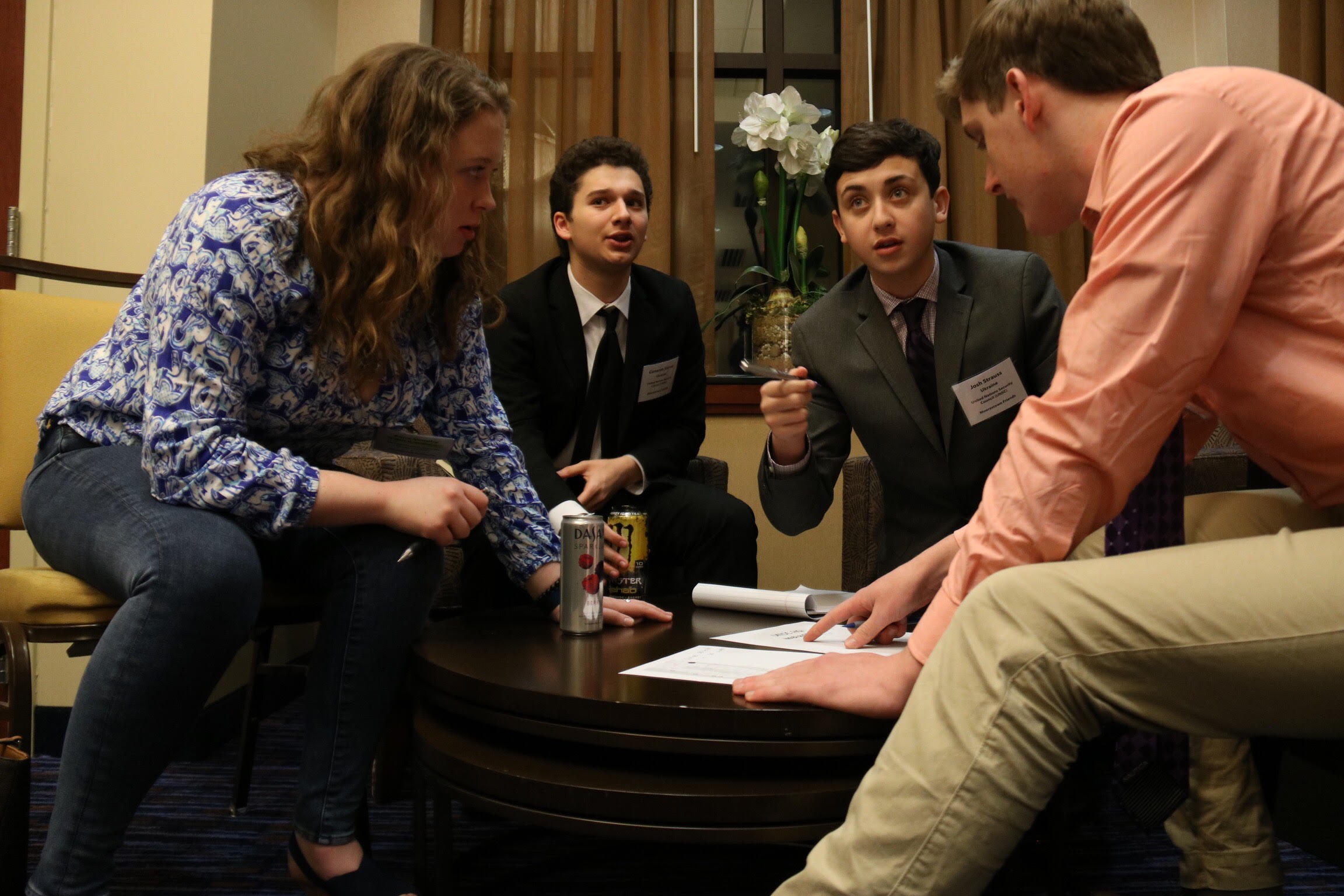 Courtesy of HenMUN
Delegates work on a resolution for committee.

According to Nick Konzelman, a junior at the university and the conference’s director-general, plans for year seven will begin in about three weeks, initiating a year-long process that involves cutting deals with hotels to house the conference’s 400-500 delegates, reaching out to charities, contacting high schools and organizing fundraising opportunities with local restaurants. The secretariat meets weekly throughout the year , and committee chairs — university students that run the Model UN committees — are tasked with writing background reports over the summer.

It all begins with the opening ceremonies, taking place in Mitchell Hall this year and featuring two guest speakers —Trevor Nelson, director of the Institute of Global Studies, and Professor David Redlawsk, chair of the Department of Political Science and International Relations — who stressed the importance of global citizenship and diplomacy. With the slam of a gavel, the ceremonies end, and a weekend of fast-paced, sleepless deliberation takes off.

This seems like a lot of labor for three days. But, according to Gabbriella Ward, HenMUN’s director of hospitality for the past two years, the weekend always makes it worth it.

She described watching students who attended as delegates in her freshman year, when she was the assistant director of a committee, and have gone on to attend the university and help run the conference.

“It’s one of my favorite things that I’ve been able to see happen,” Ward said. “From watching them learn so much as delegates, to now providing that experience to new delegates. I just think it’s the most beautiful thing in the entire world.”

And this emphasis on delegate learning is no accident. Ward described her own high school Model UN experience, taking place in Washington D.C., where committee sizes often exceed hundreds of people, making it difficult for individual delegates to speak up and participate. At HenMUN, committees seldom have more than fifty delegates, and some specialized committees have fewer than ten.

According to Ward, this allows staffers to shift their role from administration to mentorship, forming more personal relationships with the delegates and making the experience more educational.

“We’re a smaller conference, and it’s not unintentional,” Ward said. “We like to keep our size at around four-to-five-hundred high school students, because we’re able to keep the committee sessions more realistic, and there’s a focus on teaching the delegates.”

That is not to say that the conference isn’t growing, however, enrolling nearly one hundred more delegates this year than last, expanding its reach beyond the original Philadelphia area representation and into New York and Connecticut.

Unlike Ward, who had extensive experience with Model UN entering college, Kayla Snyder, the conference’s director of administration, had none, joining the conference as a low-level staffer in her sophomore year. Falling in love with the “nerdy fun” of the conference, she decided to assume a larger role, joining the secretariat her junior year.

Although several members of this year’s leadership will be graduating, including Snyder and Ward, the secretariat members are optimistic about HenMUN’s future, noting enthusiasm among both new and experienced staffers. With recent successes, such as conference-wide themes (this year’s was “Fostering Diplomacy”), new merchandise and different charity opportunities, the secretariat was confident that HENMUN will maintain the momentum and find new ways to innovate.

And then they break off, moving to a meeting with walkie-talkies in hand. Perhaps global peace is not at stake, but the graver threat of five hundred high schoolers calls for action. And just like that, year six concludes, narrowly avoiding nuclear catastrophe yet again.