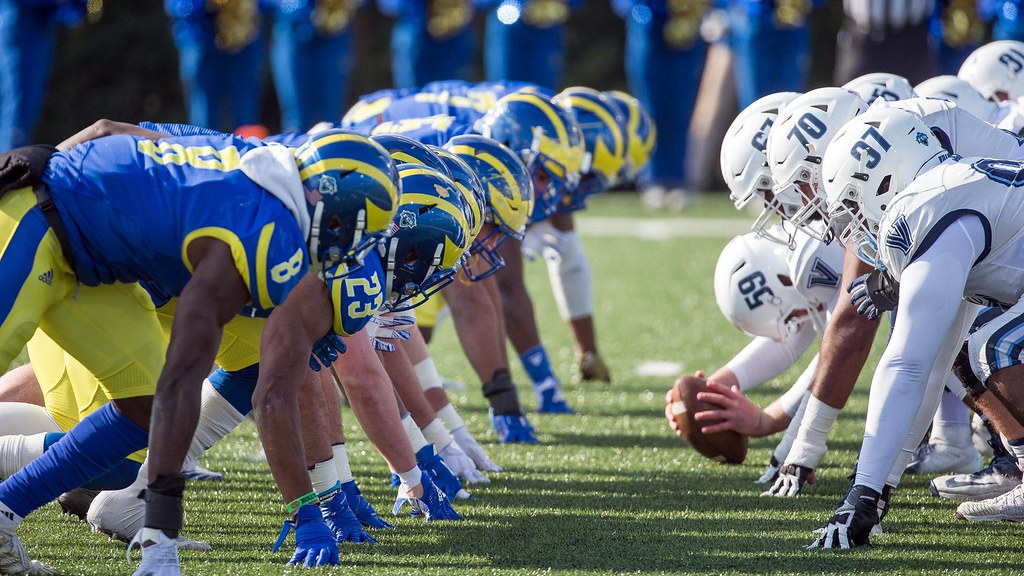 Courtesy of Delaware Athletics
Delaware has lost 12 of its previous 13 games against Villanova.

It was a beautiful day for football at Delaware Stadium Saturday as the Blue Hens took on the Villanova Wildcats in a must-win rivalry game.

While Villanova walked away with the Battle of Blue trophy after its 42-21 victory. Delaware now faces the uncertainty of where it stands in the FCS playoff picture.

“Very disappointed that we weren’t able to find a way to win the game,” Head Coach Danny Rocco said postgame. “Defensively I never really felt like we were able to get stops when we needed to get stops… that’s probably the most disappointing, maybe even disturbing, thing from the game. Defensively we gave up 460 yards there abouts.”

Delaware scored on a Dejoun Lee 38-yard touchdown run, the first of his collegiate career. two and a half minutes into the first quarter. It would be Delaware’s only touchdown of the first half.

The lead disappeared six minutes later when Villanova’s Jarrett McClenton gained 81 yards on a catch-and-run on third and four to set up a six-yard touchdown run by quarterback Zach Bednarczyk.

Delaware’s next drive was cut short by an interception by Villanova defensive lineman Jafonta Johnson. Delaware quarterback Pat Kehoe took a hit on the play and did not return. The team reported during the game that Kehoe was being held out with concussion symptoms and Rocco revealed postgame that he had been playing with a partially torn ACL.

Redshirt freshman Nolan Henderson replaced Kehoe. Henderson gained 152 yards on 12-20 passing and added 36 yards on the ground. He threw a 43-yard touchdown, the first of his career, to Joe Walker in the third quarter.

“It’s as difficult as it gets,” Rocco said. “Nolan went out there and gave us a chance.”

Only just over a minute after the Jafonta interception, the ball was in the Villanova endzone again, carried in by running back Aaron Forbes from a yard out.

Villanova added another touchdown in the second quarter, a two-yard run from running back Matt Gudzak, before halftime after its previous drive ended in a blocked field goal by Colby Reeder.

Henderson also left the game momentarily before halftime due to injury and was relieved by J.P. Caruso, who started the latter half of last season for Delaware but had only attempted three passes on the season entering Saturday’s game.

It looked like Caruso might be able to get the Delaware offense going on its final series before halftime, with two complete passes to Walker and tight end Charles Scarff for 13 and 15 yards respectively, but then threw two incomplete passes and an interception to Villanova linebacker Drew Wiley.

The first three and half minutes of the third quarter was spent back-and-forth with each team failing to convert. The Blue Hens started its second drive of the half with 11:36 on the clock — Henderson back at quarterback — and, after a nine-yard pass to Walker, seemed to be getting their feet back under them. The completion was soon followed by a pass interference call against Villanova, which gave Delaware possession at the Wildcats’ 32-yard-line. DeJoun Lee rushed for 32 yards on four carries and scored his second touchdown at 8:56 to make it 21-14 Villanova.

Villanova’s ensuing drive started at 8:49 and, following seven plays for a total of 70 yards, including at 39-yard pass completion to wide receiver Changa Hodge. The Wildcats added another score on a three-yard rush by Forbes.

Delaware would cut the score gap back down to one touchdown with a five play, 78-yard drive , capped off by the longest pass of the game of 43 yards to Walker for the touchdown. The 28-21 score was the closest Delaware would make it in the second half.

Villanova scored twice more on a two-yard rush by Forbes and an eight-yard completion to tight end Ryan Bell for the touchdown. Fifty seconds into the final quarter, the score was 35-21.

In the fourth quarter Villanova refused to let its seniors break their undefeated streak against Delaware. Bednarczyk said post game that if they couldn’t go to playoffs, they were going to get the win in the Battle of the Blue.

In the three drives Delaware had in the fourth quarter Henderson was sacked four times and fumbled the ball three times. The Hens only managed to recover the ball once though that drive ended in a fourth-down punt a play later. The second fumble at 6:13 resulted in Villanova’s sixth touchdown of the game.

He and his players agreed after the game that they wanted the chance to prove they aren’t the team that played Saturday.

As it was Delaware’s last home game of the regular season, seniors were honored on the field pregame as part of Senior Day.

Delaware now waits to see if their 7-4 overall record (5-3 in conference) will be enough to get them to playoffs.

“There will be a couple, one or more, CAA teams with 7-4 records,” Rocco said. “I’ve got no idea if Delaware will be one of them. Our league’s gonna get multiple bids into this tournament. And speaking on behalf of our league, it would be a crying shame if we didn’t….a team that is 7-4 is strongly worthy of consideration.”

Delaware will learn its fate Sunday at 12:30 p.m. when the selection show airs on ESPNU. 24 teams make the FCS playoffs, eight of which are awarded first-round byes.