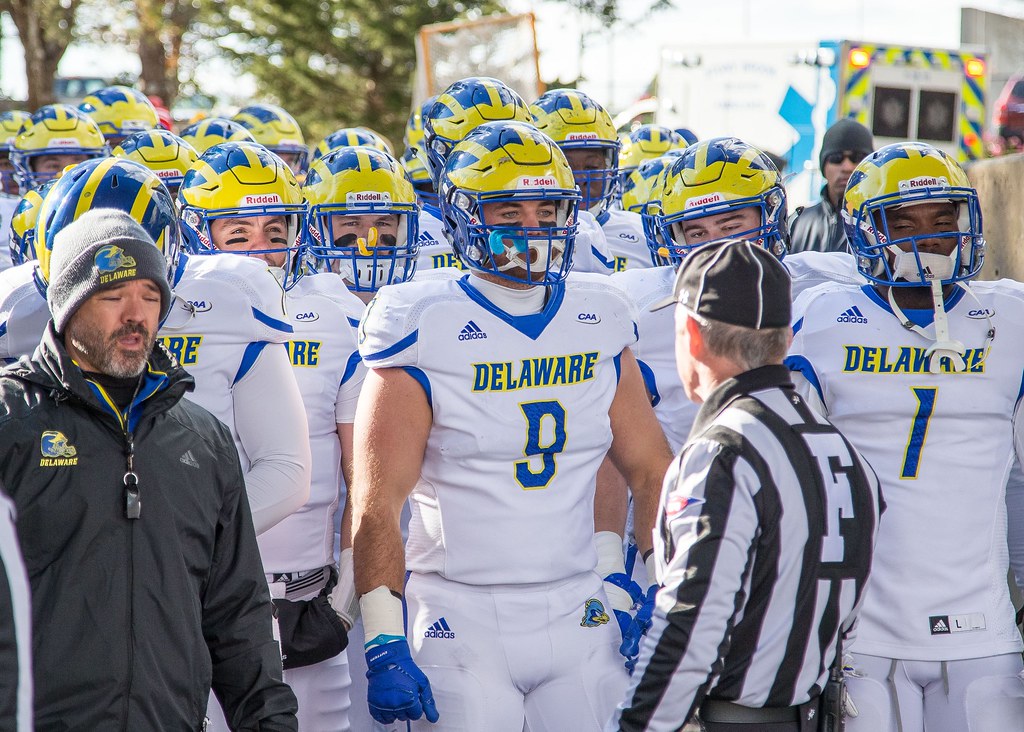 Courtesy of Delaware Athletics
Troy Reeder (9) and Malcolm Brown (1) prepare to run out onto the field at LaValle Stadium ahead of Delaware’s game against Stony Brook last week.

With less than four minutes remaining, facing fourth and 14 from the Stony Brook 29-yard line, Delaware quarterback Pat Kehoe faced pressure in more ways than one.

His Blue Hens, already trailing 17-3, were on the precipice of their first loss since September 22. Kehoe dropped back, and kept dropping, twisting left and right unable to find an avenue to escape. The drama ended, 16 yards behind the line of scrimmage, when Kehoe crumbled to the ground untouched, turning it over on downs to the Seawolves and sealing Delaware’s fate Saturday afternoon.

The collapse was emblematic of Delaware’s performance, in which they yielded 222 rushing yards to the CAA’s top ground unit, while failing to mount anything close to a consistent offensive attack themselves. It was also emblematic of the collapse the Blue Hens suffered in the final strides of their season a year ago, when they lost to CAA-rival Villanova 28-7 in the season finale.

It’s the same type of collapse they’ll try to avoid this weekend, when they go up against the Wildcats once again.

The stakes are all too familiar for the Blue Hens, who, after losing two of their final four games a season ago, missed out on the playoffs for a program-record seventh consecutive season. Delaware last made the playoffs in 2010, when they lost to Eastern Washington, 20-19, in the national championship.

The loss to the Wildcats, combined with an 18-17 upset loss at Towson three weeks prior, spoiled a midseason run that featured wins against two top 25 teams, Stony Brook and Richmond. Delaware finished 7-4 overall and 5-3 in CAA play. It’s the same record the Blue Hens would finish with this season should they lose Saturday.

Delaware Head Coach Danny Rocco said Monday at his weekly press conference that he believes a seven-win CAA team will make the playoffs, given the dearth of playoff-caliber teams in the FCS’ lower-regarded conferences. But it’s the eight-win mark, according to recent history, that nearly guarantees a spot in the 24-team FCS playoffs. Since 2013, the year the playoffs moved to their current format, no CAA team with eight wins overall and six in conference play has missed out.

Delaware can’t afford to leave its best opportunity to break this inexcusable playoff drought to chance. When Delaware lost to Villanova a season ago, Rocco rightfully contested that his team had a better case than New Hampshire, who, with the same record, made it in over the Hens. But that’s what can happen when you don’t handle business.

Delaware also has a great opportunity this weekend. Despite the loss against Stony Brook, which dropped the Blue Hens from their tie with Maine atop the CAA standings, Delaware has a legitimate chance of exiting from this weekend of play as CAA champions, also for the first time since 2010.

If Maine (7-3, 6-1) defeats Elon, Maine will win the CAA and earn the automatic playoff bid given to the conference’s winner. If Maine loses against Elon, the door opens for Delaware. In three of the four scenarios in which Delaware would be tied atop the CAA with six conference wins, Delaware holds the tiebreaker for the automatic bid over the other teams in play, Stony Brook, James Madison and Towson. In the fourth scenario, the spot would go to the team with the highest sagarin rating.

Maine and Delaware both kickoff at 12 p.m. Saturday so the Blue Hens won’t know whether they have a chance of winning the CAA before heading into action. All Delaware can and should concern itself with is defeating Villanova, which is no easy task.

The Wildcats are better than their 4-6, 1-6 record indicates and have always played the Blue Hens tight. Villanova won three of its first four games, including a 19-17 upset at Temple, before injuries set the team into a midseason swoon.

Villanova has all-conference caliber quarterback Zach Bednarczyk back healthy, who has averaged 233.4 passing yards with a 65.5 completion percentage in seven games. The senior missed part of three games this season due to injury after missing the majority of his junior campaign.

Running back Aaron Forbes is the CAA’s fifth-ranked rusher at 69.0 yards per game and is tenth in the conference in all-purpose yards at 80.7 per game. Forbes ran for 140 yards against Delaware last season, which was the most given up to a single rusher by Delaware’s defense in the past year-to-date until Saturday when Stony Brook’s Donald Liotine handled it 27 times for 170 yards.

Delaware has lost 11 of its previous 12 meetings with Villanova. Delaware hasn’t beaten the Wildcats at home since 2004, and none of the 26 seniors on Delaware’s roster, who will be honored Saturday on Senior Day, have ever been a part of a Delaware win against Villanova.

A win Saturday would send Delaware to the FCS playoffs for the first time under Danny Rocco, as either the CAA champion or as one of a potential record-five CAA at-large bids. (No conference has ever sent six teams to the FCS playoffs, as the CAA has a chance to do). It would signify the end of one of the worst stretches of Delaware football ever and transition Delaware into a new era as an aspiring mid-major titan.

When Delaware opens its 2019 season, Delaware Stadium will have undergone its first major renovation since the 1970s. The Blue Hens will face the Pittsburgh Panthers of the ACC and the North Dakota State Bison (at home) in 2019, and bouts against Penn State and Rutgers are already scheduled for future years. These games, like Delaware’s matchup against North Dakota State this season or Virginia Tech in 2017, will help the program garner more attention. Heck, Delaware’s even been swept into the trend of adding more uniform combinations, breaking tradition to entice the next generation of recruits and fans.

The final and most important component to reigniting football Saturdays is an on-field product worthy of a near 24,000-student university.

A loss Saturday would raise more doubts about a program that only narrowly defeated winless Albany thanks to a last-minute scoring drive, and Towson thanks to a drop in the end zone in the game’s waning seconds. And that’s even if Delaware makes the playoffs with a seven-win record.

If they don’t, and the drought continues, unkind memories of Delaware’s mistake-ridden, season-opening 21-19 loss against Rhode Island will undoubtedly resurface, and questions about the Blue Hens’ inability to finish off a season will be warranted.

All that’s at stake for this Blue Hens team is almost everything.