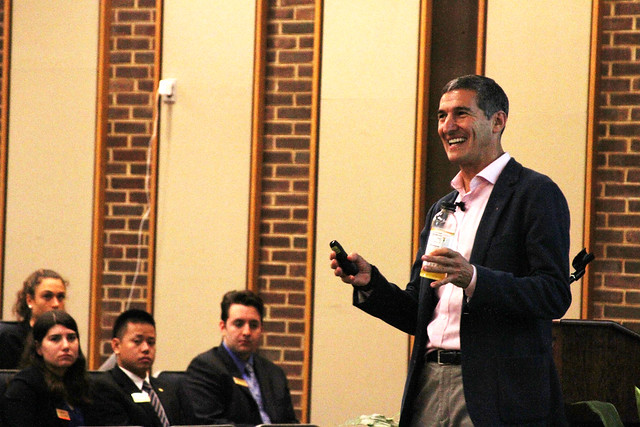 Minji Kong/THE REVIEW
The “Tea-EO” of Honest Tea, Seth Goldman, delivered a lecture that discussed his experiences in the world of business.

It was tea time for the Lerner College of Business & Economics on Thursday afternoon as the “Tea-EO” of Honest Tea gave students a peek into the world of business.

The lecture hall was packed with students and faculty alike as Seth Goldman, the founder and chief executive of Honest Tea, told the story of how his career came to be.

Goldman launched the revolutionary beverage company in 1997 as a remedy for what Goldman saw as a lack of a wholesome and tasty beverage.

“Having done a lot of running, I was always thirsty, and always felt like the drinks weren’t satisfying,” Goldman, a former track and field athlete at Harvard University, said.

Goldman explained that he always thought of himself as an entrepreneur, and the only uncertainty was what sort of business he would run. After attending Harvard University, he enrolled in the Yale School of Management.

The company blossomed from a collaboration with his business professor at Yale, Barry Nalebuff. The two men originally considered creating a juice product to market, but from his travels to China and Russia, Goldman quickly saw the value in investing in tea.

“I had been exposed to tea as a cultural food, as something that people form relationships around,” Goldman said.

In addition, tea was just the sort of healthful and inexpensive product that Goldman believed could make an impact, since it is produced in some of the poorest regions of the world.

It was Nalebuff who originated the name Honest Tea, a name that further sparked the desire to make the company stand out from the rest morally. Consequently, Honest Tea products are low in calories, organic and made with fair trade certified tea leaves and sugar.

Goldman explained that the involvement of underdeveloped communities worldwide in producing the tea allows the company to help bring wealth to those communities while still maintaining a margin of profit.

“It’s not a charity, but it’s charitable, and it’s still driven by market principles,” he said.

Even once the company was up and running, production and distribution proved difficult to navigate.

“The first ten years were challenging, even just figuring out how to make the product was hard,” he said. “The hardest part was distribution, and getting the product into people’s hand.”

The company has since grown substantially, the most significant change being its purchase by the Coca Cola company.

Goldman explained in his presentation that the new ownership allowed Honest Tea to redesign their production systems without compromising their technique of using real tea leaves and brewing practices.

Alongside Honest Tea, Goldman has become an integral part of other food companies, including Beyond Meat.

Goldman serves as an executive chair for Beyond Meat, a company that markets plant-based protein products such as the “Beyond Burger.”

The “Beyond Burger” is the first plant-based burger to be carried in the meat section of a grocery store, as it seeks to defy the stigma of vegetarian eating by providing a taste that vegetarians and meat eaters alike, Goldman said.

Goldman said he has stuck mostly to the food industry because of his experience and passion for the field, and also because it is very closely connected with the consumer as an industry.

“It’s a way to interact with consumers on a daily basis,” he said.

Goldman attributed his success in his business ventures to his passion and persistence, because the whole process of creating the noteworthy business empire involved a lot of hard work and flexibility.

“The key is to be attuned to the market,” Goldman said.

He explained how there has to be a balance between evolving with the consumer demand but not losing the values of the company.

A few lucky students at the presentation received a copy of “Mission in a Bottle,” the book Goldman and his cofounder penned about their experiences. Goldman encouraged aspiring entrepreneurs looking for guidance to read the book.

When asked what his favorite flavor of Honest Tea is, Goldman had a difficult time deciding.

“I try not to play favorites,” Goldman said with a laugh, though he admitted the Orange Mango and Lemon Tulsi flavors are high on his list.

Goldman said he is also impartial to the Honest Tea line of sports drinks because it reminds him of how it all began with his insatiable thirst in 1997.