I got my nipples pierced. And yes, it hurt. 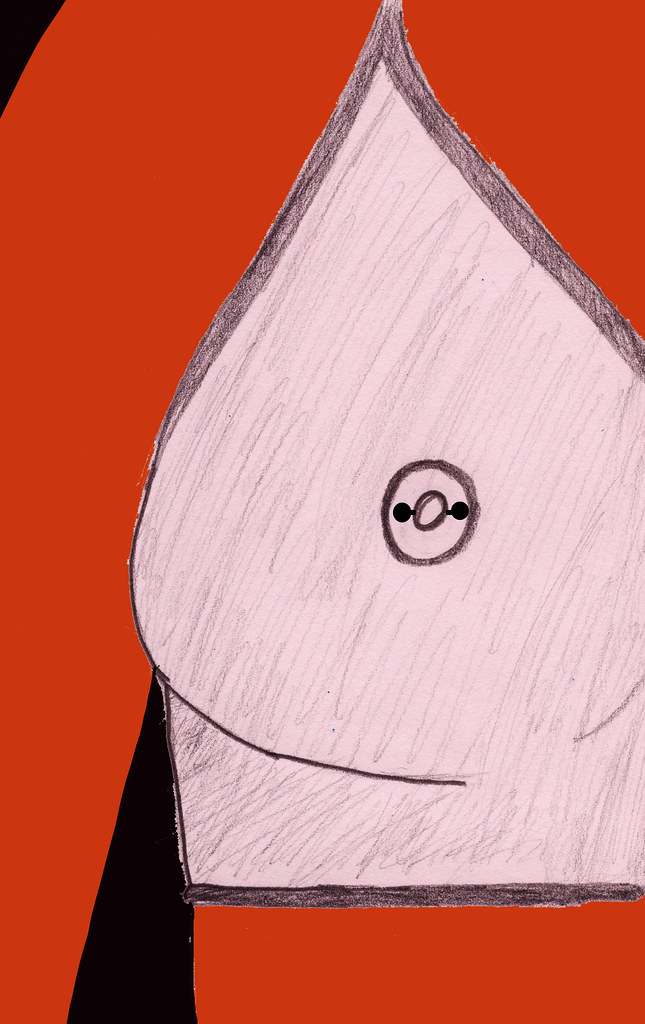 The first time I ever considered piercing my nipples was my freshman year. I was returning from a beach trip with Haven, now called the Lavender Programming Board. We were piled in the back of a van comparing piercings and tattoos. One of the seniors mentioned she had nipple rings, and loved them. My peer mentor for my Living Learning Community, Jess, loved hers too. A lot of my friends were getting theirs pierced, or were at least thinking about it. I decided I would pierce mine too, but wanted to wait a few months or a year.

I put it off for two years. My mom showed only slight disapproval upon discovering a new addition on my ears or my nose. Each time she would ask, “Did you really need that?” and each time I would answer “Yes.” And each time I answer yes, she responds with, “Well, it’s fine, as long as you don’t get your nipples pierced.” So, last weekend, I bit the bullet and got my nipples pierced.

Nipple piercings for women have grown increasingly popular over the last four to five years, ever since Kendall and Kylie Jenner admitted to having the piercing. Paris Jackson, Rihanna and Bella Hadid are a few of the many other female celebrities known to have nipple rings.

The “Free the Nipple” campaign could also be a cause to the effect, which gained traction in 2014 after a documentary on the movement was produced and became available on Netflix. I think the big spark that started the fire was when Miley Cyrus announced her support of the campaign via Instagram, accompanied by a topless black and white picture. She’s still testing the waters that are Instagram’s guidelines in 2019, having just posted a picture about three weeks ago with a sheer white top that showed her nipples clear as day.

The first question each of my friends asked after I showed them the piercings is, “Did it hurt?” I hate that question. Yes, it hurt. A needle stuck through any part of your body is going to hurt. However, there are mixed opinions on how that pain compares to other piercings. Some say it doesn’t hurt at all, others say it’s the worst pain they’ve felt in their entire life.

I have a friend from high school, Vivian, who described the pain from her nipple piercings as worse than stretching her ears for gauges. In my opinion, it felt the same as any of my other 15 hoops and bars and rings in my body. Obviously, it was painful, but it was short lived.

I brought along two of my best friends with me for moral support. I chose American Art right here in Newark because I knew people who had been there before and vouched for its cleanliness and professionalism. It was also one of the cheaper options. One shop that I called was asking $125 for the pair. The average answer was $100 or $110. American Art did it for $80.

It was a little awkward getting started. The piercer first asked to “take a peek” so he could measure for barbell size. Then there was the usual paperwork: copy of the ID, signature, payment, etc. He asked if I wanted the other people in the room (other customers and tattoo artists) to leave so I would be more comfortable, but I’m not particularly shy and also didn’t want to interrupt anyone’s session so I said I didn’t mind.

The piercer used a marker to make dots on either side of my nipples to direct the needle before I got in the chair. I realized I was sitting bare-chested in front of about six people including my friends. All I could think about was that vine of the guy who says “So I’m sitting there, barbeque sauce on my titties.” Except there was no barbeque sauce. Just a big fat needle looming a few feet away. My palms were sweaty and I started shaking a little from nerves, which in hindsight was completely unnecessary.

The piercer used a clamp (ouch) to keep the dots straight and pull out my nipple. He lined up the needle, a piece of cork on the other side to push it in to, and told me to take a deep breath. My friend was holding my hand, his circulation probably gone before anything had even happened. I sucked in a huge breath, and let it out heavily with my eyes squeezed shut.

I’ve gotten enough piercings to know exactly when the pain will hit; right in the middle of the exhale. I felt that sharp, burning pain from the needle in my left nipple (OUCH), which lasted for about two seconds. After the actual puncture, there was almost no pain. He quickly slid in the barbell and twisted the ends on, and left some Q-tips by the holes to catch any blood that came through. We repeated the other side, with the exact same deep breath, hand squeezing and half-assed yell for dramatics.

It was over before I knew it.

There are a lot of mixed opinions about whether or not it feels better or worse to wear a bra the first couple weeks. I chose not to wear one that day, and I regretted it. My suitemate had hers done about two years ago and never wore bras anyways, so she said it felt better to not wear one. However, taking the same advice from someone about four cup sizes smaller than me was not the best idea.

If you live in Newark, potholes, uneven pavement and frequent brake slamming for pedestrians is not an unfamiliar experience, especially on Main Street. The drive home was hell and I had to keep rearranging the seatbelt to stay off my chest. I ended up making my friend drive the rest of the way home so I could sit in the passenger seat and hold my boobs in place. But, other than that first day, they haven’t ached or been unbearably sore since. Most of my other piercings will burn or sear in pain if I bump them on something, but these don’t.

So far, the healing process has been easy, but I hope I’m not speaking too soon. I’ve heard stories that sound like nightmares about combating infected nipple piercings. Sometimes the healing process itself can be too painful for some to bear. My friend Jadyn took hers out after nine months because her nipples were healing so slowly and she couldn’t stand the pain. Nipple piercings do ooze in the very beginning stages of healing. Gross, I know, but it is natural. Mine stopped after a few days, but (another nightmare story.) Chloe, another one of my friends from high school, told me hers did not stop for several weeks.

Antibacterial soap (which I picked up at Walgreens before switching to the passenger seat on the way home) is going to be my new best friend for the next six months. Sea salt sprays and soaks keep them clean and healthy too. I also clean them in the mornings with saline solution if they bleed overnight. Other than when they’re being cleaned, just like all other piercings, nipple piercings shouldn’t be touched at all. Every time the ring is moved, it breaks the healing barrier, so leaving it alone as much as possible is extremely important.

My overall consensus? I love them and would tell everyone to get their nipples pierced too. A few of my friends, like my roommate from last year, told me she cringed and grabbed her boobs in horror at the thought of getting her nipples pierced. For others it’s a confidence booster. My peer mentor, Jess, said her boobs “ballooned” in middle school and she always hated them. After getting her nipples pierced, she found a new love for her body. My friend Chloe told me that after her piercings healed, she became obsessed with them. She describes her chest size as rather small, but the piercings made her confident and her sex life “crazier.” My friend Vivian said the same thing; they’re sexy and they make sex more fun. But for her, they are also a symbol of independence. Her ex-boyfriend told her she wasn’t allowed to get them, so she says that having them gives her a sense of agency over her body.

The maintenance will take patience but I think it will be worth it. Nipple piercings are cute (“accessories” as my piercer put it) and they don’t hurt nearly as bad as you would think. Also, no piercing is permanent, and can always be taken out later.