LGBTQ+ young adult novels to put on your reading list 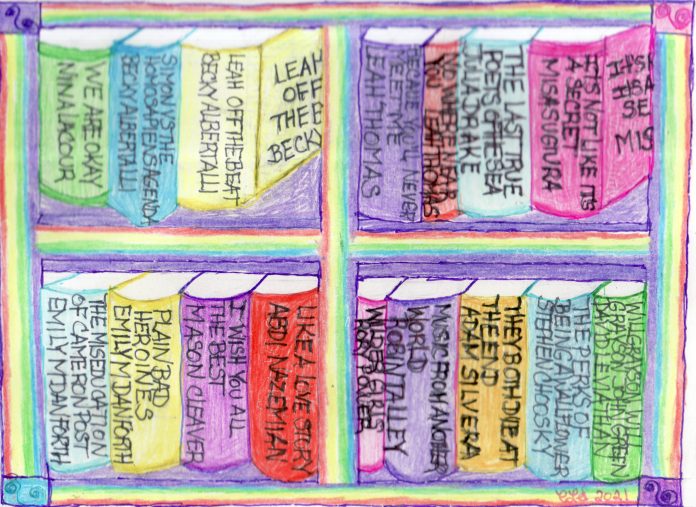 As a person who enjoys reading quite a ton but never has a lot of time to do so, I treasure every book I have the chance to read. Over winter break, over the summer, during Zoom class when I’m supposed to be taking notes, all of these times I have the opportunity to read are so great.

As a reader, I love when I can see myself in books, even if it’s just tiny parts of myself. Whether the main character is a young college student or someone who doesn’t like shrimp, I’m bound to appreciate the book even more if I can point at a character and say “me too!” That is why, as a lesbian, I love to read books that feature LGBTQ+ characters. I have read a lot of these types of novels and wanted to recommend some of my favorite books that feature LGBTQ+ characters.

Before I begin with the books, I do want to mention that lots of these books involve main characters coming to terms with their gender identity or sexuality. While I really enjoy those stories, I also think it’s important to feature LGBTQ+ stories where their identity is not the main conflict. While I think that is a valid and true experience for lots of LGBTQ+ people, it is also not the only problem an LGBTQ+ person can have. Some of the books on this list do have LGBTQ+ characters that have different problems that don’t relate to their sexuality, which is great as well.

1. “Because You’ll Never Meet Me” by Leah Thomas

“Because You’ll Never Meet Me” is a great mix between sci-fi and teenage angst. It’s an epistolary novel, which means it is written as a series of letters between the two main characters. One character has seizures whenever he is around any kind of electricity, and the other has a weak heart that requires a pacemaker. These characters have medical conditions that will never allow them to be near each other. However, since they are both lonely and have no one to confide in, they become pen pals anyway. They grow closer throughout the book as they write to each other, confiding in each other more with each letter. The plot of this story is developed beautifully, and by the end you are so attached to these characters that you don’t know what to do with yourself. Luckily, there is a second book called “Nowhere Near You,” which explores our characters and the lore behind their conditions even more. I won’t spoil why I put it on this list, but I bet you could guess.

2. “I Wish You All The Best” by Mason Cleaver

Next on the list is “I Wish You All The Best.” The book features the experience of a recently-out nonbinary character named Ben. When Ben comes out to their family, they are thrown out of the house and have to move in with their sister and her husband. They navigate a new school where they keep their gender identity a secret, a damaged relationship with their sister who left Ben all alone with their parents and complicated feelings for a new friend. This book was a very good read and really educational about some of the experiences of being nonbinary.

3. “The Last True Poets of the Sea” by Julia Drake

If you’re looking for a book where being LGBTQ+ is not the primary character element, this is a great book for you. “The Last True Poets of the Sea” explores the adventures of a troubled teenage girl named Violet who can’t seem to stop getting herself into sticky situations. After her brother attempts to take his own life, her parents send Violet to live with an extended family member in the town of Lyric. Violet must navigate her own angst while figuring out how to be a better sister and better person. The life she makes for herself in Lyric is not one she originally wants, but in the end, it leads her to lots of good things. Personally, this book tore me to pieces because it is heartbreaking in a lot of ways, but I believe it’s a better book for that.

If you don’t have a lot of time to finish a large book or book series, “We Are Okay” is perfect for you. It is a fairly short novel about a girl who is staying alone at her university over winter break because her grandfather, who was her guardian, passed away. Her best friend, who she hasn’t seen in a long time, comes to visit her for winter break. However, their relationship took a couple of hits ever since her grandfather’s death and nothing is really the same. As the book goes on, we get flashbacks into the past to learn more about the relationship between the main character and her grandfather as well as the relationship between the best friends. Even though this was a fast read, it developed the character relationships really well, along with having a great twist at the end.

“It’s Not like it’s a Secret” is a dramatic book if I’ve ever read one. Sana Kiyohara, the main character, deals with drama from all sides after she moves to a new school in California. She has trouble with her family life, with her friendship and especially with fitting in. I won’t say much more because this book is full of secrets waiting to be spilled, but I especially recommend this book to anyone who loves a lesbian coming-of-age story.

6. “Music From Another World” by Robin Talley

Taking it back to 1977, this novel follows Tammy Larson and Sharon Hawkins through their very different lives. Tammy is a closeted lesbian who lives with extremely religious and homophobic parents, and Sharon is a punk music-obsessed teen who has to lie for her gay brother who is trying to live his life authentically. “Music From Another World” is another epistolary novel, and as the girls write to each other they realize that they are not too different. Talley has written other LGBTQ+ books as well that I am a fan of such as “Pulp,” which takes place during both the present and the Lavender Scare in the 1950s.

Another great book that takes place in the past is “Like a Love Story.” I will admit, this is the one book on this list that I have not actually read for myself. However, this is supposedly a great LGBTQ+ read, as it is centered around a gay teenager in the times of the AIDS crisis in New York City. However, the gay teen, Reza, is not out, and is in fact dating a girl. When the school’s only out kid, Art, makes his way into Reza’s life, things get really complicated. This book celebrates self-expression in the face of challenge and is definitely next on my personal reading list.

Tired of living in a world with a not-so-fun real plague? Want to read a book with a totally fake and way more badass plague? “Wilder Girls” is the next book that you should read. The dystopian fiction novel takes place at an all-girls boarding school isolated on an island. The island has been infected with a deadly plague called “The Tox” that infects plants, animals and even humans. The girls must band together and learn how to survive. The book specifically follows three main characters that work together to uncover the real secret behind “The Tox” and the life they live. This book legitimately had me on the edge of my seat and turns gay when you least expect it.

9. “They Both Die at the End” by Adam Silvera

If you are looking to absolutely bawl your eyes out, “They Both Die at the End” is a phenomenal pick. I’m sure from context clues you can guess what happens at the end of the story, but what happens in the middle of it is what makes it a heart-wrenching story. In the universe of this novel, for some reason, you get a call at midnight on the day you will die letting you know that it’s your last day on earth. Our two main characters, Mateo and Rufus, are both set to die on the same day and somehow find themselves together for their last twenty-four hours. Adam Silvera, the author of this novel, has also written a couple of other enjoyable LGBTQ+ books in case you have any tears left to spare after this book.

Before I get to the last book, I wanted to give some honorable mentions to what I believe to be more mainstream LGBTQ+ books but are still entertaining, and they definitely deserve a place on this list. “Will Grayson, Will Grayson” by John Green and David Levithan is about two teens with the same name that cross paths. The book touches on sexuality, mental health and identity. “Simon vs the Homo Sapiens Agenda” by Becky Albertalli is the original book that the popular movie “Love, Simon” was adapted from. Although I have never read the book, I have seen the movie, and if the movie stays true to the book it is sure to be a worthwhile read. Albertalli has also released a sequel entitled “Leah on the Offbeat.” Finally, there’s “The Perks of Being a Wallflower” by Stephen Chbosky. If you have not seen the movie or read this classic coming-of-age novel by now, legitimately stop reading this article, and go consume this content. The book goes into far greater detail than the movie, and I honestly prefer it.

9. “The Miseducation of Cameron Post” by Emily M. Danforth

As the last book recommendation on this list, I have saved my all time favorite book: “The Miseducation of Cameron Post.” This book follows our main character, Cameron Post, throughout her life as she deals with the death of her parents, discovering her sexuality, having a secret relationship with her best friend and eventually getting sent to conversion therapy. Danforth develops the character of Cameron so well, and that is one of the things I love most about this book. I won’t say much more about the plot, and trust me, there is a lot more; but if you don’t read any other book on this list, read this one. There is also a movie based on this book that features Chloë Grace Moretz, but the movie only captures one-third of the book’s story, so I think of it as a separate work.

Representation of LGBTQ+ characters in any type of media is extremely important because it allows LGBTQ+ people to see themselves in the content they consume, which is why all of these books hold a special place on my bookshelf. Hopefully, this list was able to inspire you to add one of these books to your reading list, however long it may be.

Share
Facebook
Twitter
Pinterest
WhatsApp
Previous article“For Teens, By Teens”: Teen Warehouse opens in Wilmington to change the way the city serves its teenage population
Next articleOpinion: The war between Gen Z and millennials is stupid