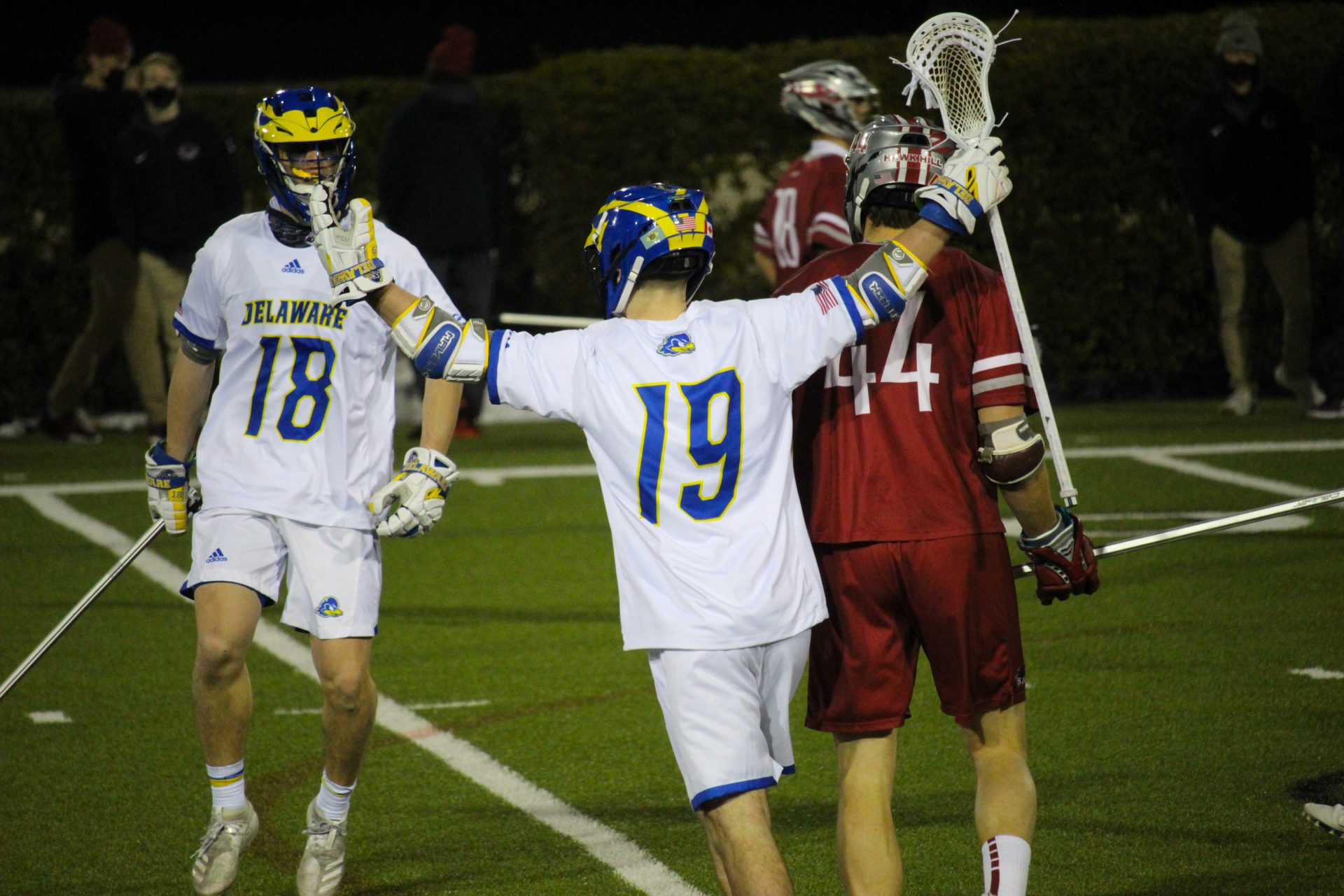 Delaware’s men’s lacrosse team returned to Delaware Stadium for the first time in nearly a full year on Tuesday night, after their 2020 season was cut short by the coronavirus pandemic.

Sophomore Mike Robinson pointed to the home crowd and the team’s energy as benefits the team had not enjoyed since last February, saying “life felt normal” amidst the ongoing pandemic.

The third game of the season saw the Blue Hens improve to 2-1 against St. Joe’s (0-2) in a 16-13 win. Delaware jumped out to an early lead and maintained that lead for all four quarters.

St. Joe’s defense had no answer for Robinson, who scored nine of the team’s goals. That mark is the most goals by any Blue Hen since 1963 and a Colonial Athletic Association (CAA) record.

“This was a game [Robinson] was really excited for,” Head Coach Ben DeLuca said in a postgame interview. “He was changing planes, changing levels and changing spots all game.”

Alongside Robinson, CAA Offensive Player of the Year Charlie Kitchen played in his first game of the season, notching two assists on the day. Junior Tye Kurtz followed Robinson in goals for the Blue Hens with three of his own on four shots. Both were crucial to the team’s offensive output.

“[There was] open space, and we were canning the shots,” Robinson said of the team’s play. “[And] it’s always nice to have guys like Tye and Charlie back in the lineup.”

Head coach Ben DuLuca mentioned that Kurtz’s and Kitchen’s minutes were limited as they returned to action but said that the two along with Robinson have “great chemistry” on the field.

Tuesday’s game began with two opening goals by Robinson, and his scoring prowess continued throughout the opening period. Delaware entered the second quarter up 7-1, with five goals scored by Robinson.

St. Joe’s came alive on the offensive end in the second quarter with six goals on 23 shots. Despite only having eight shots in the period, the Blue Hens added five goals of their own to hold a 12-7 advantage after the second quarter.

Both teams were quiet offensively in the third quarter, as the Hawks cut the Delaware lead to 13-9. In the final quarter, the visitors pulled the deficit down to 13-10 with just over 11 minutes remaining.

Soon thereafter, Robinson added two consecutive goals, his eighth and ninth on the day, to extend the Blue Hens’ lead to 15-10. The Hawks scored a few late goals, but Delaware hung on for a 16-13 win in the end.

On the Hawks side, sophomore Matt Bohmer led the scoring with four goals. Junior Zach Cole dominated the face-offs, winning 23 of his 32 contests. St. Joe’s tallied 15 more shots and seven more shots on goal than Delaware but could not convert often enough.

Senior goalkeeper Matt Kilkeary was able to keep the Hawks’ shooting percentage down with 16 saves, giving him three consecutive games of a save percentage of .500 or higher.

With a season opening loss to Mount St. Mary’s and a win over NJIT last week, Delaware finishes their non-conference slate with a 2-1 record. Upcoming are the team’s eight CAA matchups.

Despite today’s win, there are improvements to be made in all areas as conference play looms, according to both Robinson and Coach DeLuca.

“[We] can’t be giving up man down goals like we did today,” Robinson said. “Those eight penalties are something we will have to clean up.”

“It will be critical for us when watching film — we need to clean up the defensive breakdowns,” DeLuca said. “[We had some] undisciplined fouls and clearing mistakes, but what I liked, was that we played really hard.”

The Blue Hen men return to their home turf this Sunday versus Bellarmine University. Then, conference play begins when they travel to Fairfield University on Mar. 6 for the first of their two games.