My brother has autism: This is what he taught me 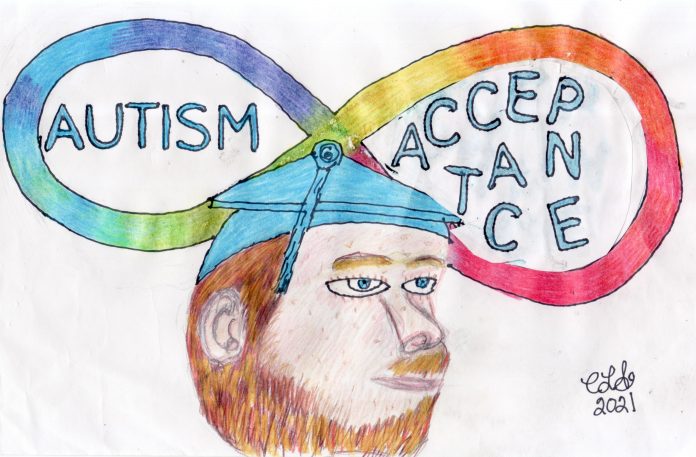 He is 25 years old. He cannot talk. He makes mumbling sounds and points to get your attention. He cannot hold anything resembling a normal conversation. He lives by routine and repeats the same words and phrases over and over again. He hates loud noises and will plug his ears with his index fingers. His hands look like a telephone when he does it…

Whenever I tell someone new that I have a brother, they are so shocked to find out that part of me. Being a twin, people tend to think that I don’t have any other siblings.

“Yeah, but he has autism,” I usually say, and then I start to list off a few symptoms of his condition.

The person on the other end of the conversation then says something along the lines of: “Wow, I’m so sorry! You must be an angel for taking care of him!”

No, I’m not. I’m just his sister. I don’t want anyone to apologize to me for my brother’s autism. I will not apologize for it, either. But I do want to talk about it.

Autism can be defined as a developmental disability which affects language and communication, sensory processing and motor skills, cognition and social interaction. For individuals with autism, the brain develops differently right from birth and affects various processes and certain social behaviors. This may seem like a mouthful, but simply put, autism is just another way of seeing the world.

If you couldn’t already tell from the people updating their profile pictures and cover photos on Facebook with the “Light It Up Blue” Autism Speaks filter, April is World Autism Awareness Month. National Autism Awareness Day is on April 2 every year, and it’s also a day in which my news feed is completely filled with different pictures of blue puzzle pieces: a symbol representing the mystery of the “puzzling” condition.

Though I love to see the support surrounding autism awareness, I can’t help but wonder how many of the people sharing these images actually know what they’re posting about. Most people are aware of what autism is, but not many people understand all the nuances of autism or accept its “ugly” side (you know, the parts of autism that aren’t shown on TV).

I should disclaim that as a neurotypical person, I cannot speak on behalf of the autism community (not even for my brother, who is nonvocal).

There is great diversity within the spectrum, and in no way will I ever discount that fact.

However, I feel that I’ve also been taught perspective that goes beyond the classroom, and that is part of why I want to share my perspective.

The other part is, well, because I think I have had a unique life.

I grew up with an older brother four years older than me whose needs were always more important than mine. Whining about staying up later or wanting the newest phone seems completely insignificant when your sibling is struggling with basic life skills. In a way, my twin sister and I have become his “second” parents for as long as I can remember. Since he cannot communicate his needs properly, I have to pay extra attention to his physical cues. When I don’t understand him, he gets frustrated. And so do I.

You deal with a lot of emotions and anxieties that never cross the minds of other kids your age. My thoughts became consumed with the looks strangers would give when my brother would act out in public. Why are those kids staring at my brother? What are they saying? Please stop flapping your arms. Even though my brother cannot understand what these things meant, I always felt that it was my responsibility to make him look as “normal” as humanly possible.

Your perception of yourself changes. Sometimes when a sibling has a disability, you feel pressure to compensate for it. I wanted to be the best at everything and go above and beyond in every minute detail of my life. I wanted to be the smartest student my parents would beam over (to clarify, this was self-provoked and not from my parents). I selfishly considered myself the only possible ‘proof’ that my parents were good parents and could raise ‘good’ children. Who else did they have? Who will take care of them someday?

I realize now that I could not have been more wrong.

People fear what they do not understand. Understanding is the key to acceptance; to understand that everyone is different and some people need extra help, extra time, extra attention and a little extra love. Understand that a disability does not give you the right to ever feel you are worthier than someone else. Autism exposes some tough, scary feelings. It forces you to reevaluate and abandon the life you may have envisioned and begin a new, untraveled, unplanned path. You don’t know where this path ends, but you just grab your family’s hands and head on down.

My parents are my brother’s biggest advocates. My dad has always defended my brother when he was treated unfairly and would speak up for him when he didn’t have the words to express it himself. My mom works for Autism Delaware, a non profit organization that seeks to help families and individuals affected by autism through resources and support. With my parents’ love and dedication, my brother and I have grown into young adults with the utmost respect and gratitude for one another.

Through Autism Delaware, my brother was able to receive the support that he needed to start his life after graduation. Last year, he got his first paying job through their vocational program, Productive Opportunities for Work & Recreation (POW&R).

Even during the pandemic that has plagued everyone of their freedom, my brother finds solace in drawing his renditions of billboards and signs he sees, listening to The Beatles and taking long walks in the park with my family. I couldn’t be more proud of how far he has come in life, and his happiness has helped me be grateful for all the little things I have, including him.

To be the sister of a person with autism means that every day is crazy and you never know what to expect. It’s stressful. It’s chaotic. Acceptance of my brother’s autism took longer than I wanted it to. You hate your sibling; you love your sibling. It took me sitting down and writing this to realize that my language surrounding my brother’s autism was wrong. Yes, his life is impacted by autism. No, he is not defined by this. My brother is more than a list of symptoms or “quirks.” People need to understand that asking about someone’s disability will not help you understand them, it just makes it seem like that is all you see them for.

He is 25 years old. He is brilliant. He is priceless. His brain works in ways mine never will. He is a human, not a puzzle piece. My brother, Robert, has autism.