Nasir Adderley: “In The Moment” 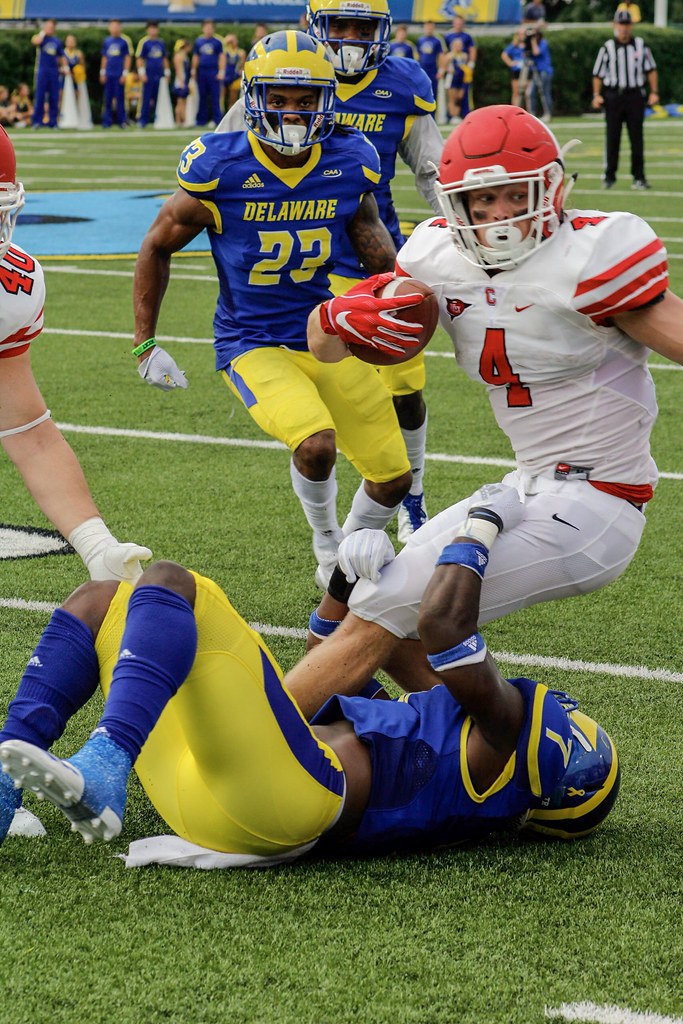 LOUIS MASON/THE REVIEW
No. 23 defensive back Nasir Adderley ready to defend at Saturday’s game against Cornell.


It started with a dream, like it does for so many kids. Nasir Adderley is a senior now, looking towards graduation and life after college football.

And, as he comes off the practice field on an early season Thursday evening, he may also be looking towards a professional football career.

His gaze rarely drifts backwards. He’s not seeing the stats and All-Conference awards from his time at Great Valley High School. His focus isn’t on the district title he won with his team his senior year. It’s not on turning down a scholarship to Wake Forest to keep to his commitment to Delaware and how that’s worked out for him.

He mentions his past seasons only briefly. Adderley was one of two true freshmen to start all 11 games in his first collegiate season. He was part of a unit that ranked in the top five in the CAA and 24th in NCAA in total defense, ranking third and 22nd in scoring defense.

He’s earned All-CAA honors, first as a cornerback his sophomore year (third team) and then as a a safety his junior year (first team). He seems too humble to dwell on past accomplishments.

“I’m trying to really stay in the moment and focus on winning every game,” Adderley said. “I know the better we do going into each week, everyone’s individual goals will prosper as the team wins.”

What he’s carried forward from previous seasons isn’t the awards or personal successes. Instead it’s knowledge, particularly in his game day routine.

“As I’ve matured I’ve learned how to take care of my body,” Adderley said. “That’s how I spend my game day, making sure I’m rolling out, stretching, getting the proper treatment I need just to endure a game. So that’s mainly the only thing, and then leading up to the game, I listen to slower music just to calm my mind down. And then right before I go out, I get all hype and just get all crazy, go win.”

He adds that while he listens to a wide a variety of music, and likes fellow Philadelphian Meek Mill, right before he goes out, he prefers gospel music earlier in the day. His favorite might be “Never Would Have Made It” by Marvin Sapp.

The focus on the present is so intense that when he’s asked about plans for after graduation this spring, his eyes go wide.

“I can’t even believe it’s here,” Adderley said about his senior season. “Hopefully I can play professionally, but I also want to start working towards a second career and possibly open up a gym with personal training.”

Majoring in Health and Behavior Science, Adderley interned with the university’s strength and conditioning department this past summer under Chris Stewart.

“I loved it,” Adderley said. “He knows so much about personal training and just fitness in general. I actually feel like he’s one of the best in the business; I learned so much from him. And it made me a better football player and just prepared me to be able to help others.”

He also added that he thinks the internship helped him to prepare, hopefully, for the NFL Scouting Combine.

When prompted, he dares to look far, and shares that while opening a gym in his hometown area of Philadelphia would be nice, as he’s “looking to do [personal training] worldwide.”

“I want to have many different locations,” Adderley said. “I’m looking to work with anybody, not necessarily athletes, but anyone looking to gain weight, lose weight, whatever that goal may be.”

On one hand, he’s setting himself up for a solid career after college, as every student hopes to do. But he’s also an athlete.

He’s not staring off into the distance, looking for a future. His gaze now is sharp, focused on the here, the now, the present.

Adderley does get a wistful smile when he’s asked which he would play for if he could go anywhere professionally.

The Eagles, of course.

“It’s a blessing, I’m just grateful for it all,” Adderley said. “It’s just something I always dreamed about, being watched by scouts. It just makes me go harder — it’s just all motivation. But I truly try to stay in the moment; you can’t get too consumed with that, or it’s, like, going to deter from your potential.”