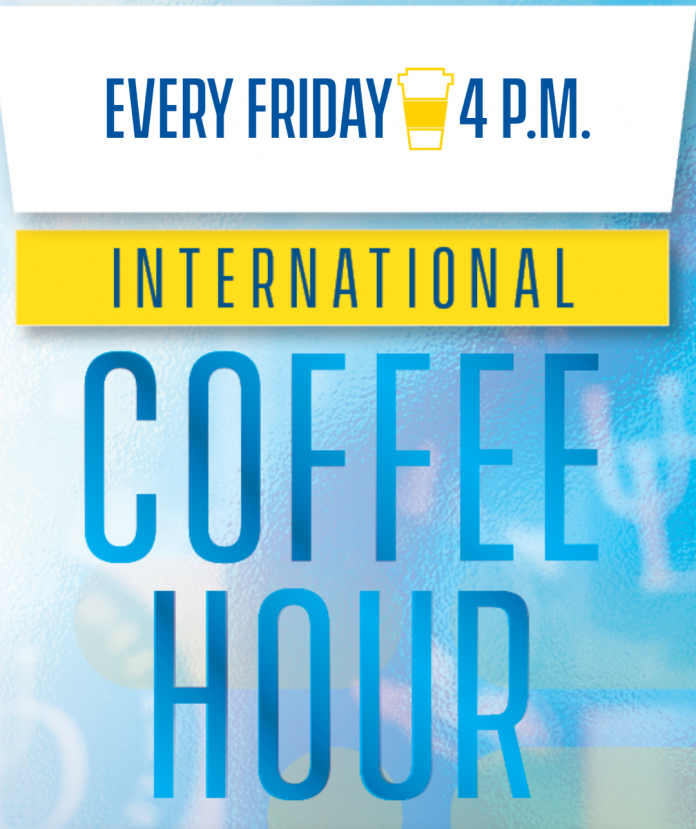 It is difficult to make a compelling case for the university lacking in international character.

As the 1923 birthplace of study abroad programs in the United States, the university is home to a variety of internationally-minded programs, from the English Language Institute (ELI) to the World Scholars program. The university is both a giver and a receiver when it comes to going global, hosting international students from more than 100 different nations and sending domestic students abroad to more than 40 countries.

Most of these programs find their footing in the newly-named Center for Global Programs and Services (CGPS), comprised of the former Institute for Global Studies and Office for International Students and Scholars.

While the world beyond national borders currently remains out of reach for most, the CGPS has reimagined one of its programs to continue expanding the university community’s global horizons: International Coffee Hour.

Founded by Ravi Ammigan, associate Deputy Provost for International Programs and an assistant professor within the School of Education, in 2013, when circumstances necessitated a virtual shift, Cesar Caro, programming associate at the CGPS, rose to the task.

Joining the former Office for International Students and Scholars as Programming Associate in 2017, Caro oversees social media communications and programming strategy alongside the organization and implementation of International Coffee Hour.

Before the pandemic, International Coffee Hour was just that: a time where the university community, international and domestic alike, could socialize over caffeinated beverages and other refreshments and enjoy live entertainment.

According to Caro, traditional International Coffee Hour has something for everyone, including those who want to relax at the end of the week, those who want to convene with friends before embarking on weekend plans and those who simply want coffee.

“And for some people, it’s a place to meet new people and find, you know, people from other countries or people who have different paths and different backgrounds,” Caro said.

Now, like most other activities, International Coffee Hour is conducted over Zoom every Friday from 4 to 6 p.m. The CGPS went into the virtual shift last spring with some grounding in Zoom from doing webinars, but they were still met with challenges.

“The difficult thing is trying to recreate an informal social space in a way that is fun on a platform that is primarily for students, at least associated with class,” Caro said.

In shifting from in-person to Zoom, the CGPS sought to determine the “essence” of International Coffee Hour to ensure that virtual attendees could come away with the same experiences that an in-person attendee could. Establishing a consistent event time and ensuring that participants can relate through “common experiences” played major factors.

“It’s very intimidating to go up to a stranger in a virtual setting where you have nothing in common, out of the blue, and just start talking about personal things,” Caro said.

Although attendance fluctuates based on scheduling conflicts and Zoom fatigue, Coffee Hour is frequented by staff and domestic, international and ELI students. The in-person version lasted from 4 to 6 p.m., but the virtual version usually occurs from 4 to 5 or 5:30 p.m.

“That message that we want to send is that we’re always there if you want to join. Regardless of whether you have time or not, we’re there,” Caro said.

Depending on attendance, virtual International Coffee Hour emphasizes “bilateral exchange” and consists of determining and discussing a “shared experience,” engaging in smaller conversations in breakout rooms and reconvening to discuss broader applications of topics.

Virtual International Coffee Hour has also had special events, such as a discussion with some of the winners of the 2020 International Student Essay Contest in March.

Following lockdown in the Spring of 2020, virtual International Coffee Hour continued throughout the summer for the sake of international students whose access to their home countries may have been limited.

“We wanted to make sure that, just like with real Coffee Hour, that there was an opportunity for people to get together and sort of feel a sense of community,” Caro said.

In trying to educate participants about different cultures and places and create “a community of explorers,” the digital version of International Coffee Hour utilizes first-person, walk-through videos of locales in various countries, as well as trivia and radio stations related to the location in question. The list of places such activities have focused on is extensive and tends to consist of the home countries of international students and countries where the university has study abroad programs.

Caro admits that the experience is not exactly “authentic,” but he likes providing people with new modes of exploration. Although watching those locational videos can be done independently, he emphasizes the connections that can be generated through them viewing as a group.

“For the most part, I would say what I find very satisfying is being able to sort of really explore new places with people,” Caro said. “It’s kind of like you’re traveling together in a group and learning new things.”

One of Caro’s favorite virtual International Coffee Hour memories is when a student who wanted to study abroad in Rome was able to connect with a student from Italy.

“That was all because they both happened to come to Coffee Hour that week,” Caro said. “If they had come different weeks, that wouldn’t have happened.”

Nora O’Brien, a senior World Scholar with majors in Spanish studies, Italian studies and linguistics and a minor in art, began attending International Coffee Hour in 2018 as a sophomore.

Although they are a domestic student originally from Connecticut, they have become acquainted with and frequented International Coffee Hour thanks to other internationally-themed programs at the university.

“I work at the English Language Institute, so I tend to go to a lot of these things just because I bring my students to different events,” O’Brien, a peer mentor at the ELI, said.

However, O’Brien attended International Coffee Hour before they began working at the ELI, and it was living in the International House, or iHouse, through the World Scholars program that brought the weekly gathering to their attention.

“It just felt like an opportunity to kind of connect with people from other places because I think a lot of times; there’s a little bit of a barrier between the domestic students and international students,” O’Brien said. “And so I feel like it’s just a more organic way to break that a little bit.”

O’Brien recalls their first time attending International Coffee Hour as not as uncomfortable as one would be initially inclined to think.

“It felt natural and it wasn’t as awkward as just going up to someone,” O’Brien said. “That can be kind of hard even if it’s just domestic students.”

O’Brien recalled that the in-person version of International Coffee Hour tended to spur more interaction, given that it offered free food and took place in the Trabant Student Center. In contrast, they noted a current lower level of attendance.

“But I also think it’s really hard to just make yourself log on to another Zoom meeting after class, so I don’t blame people, but … It definitely feels a little different,” O’Brien said.

As of late, O’Brien’s attendance has been more contingent on whether their ELI students want to go. Regardless, O’Brien has still been able to generate connections in breakout rooms, learning about new perspectives through discussing the graduate school experience with international students. O’Brien has also enjoyed the new activities.

“It’s kind of cool to be able to see what these different places look like,” O’Brien said. “We’ll do some trivia about it so learning, I guess, about these different countries that maybe I haven’t visited is very interesting.”

Mahmoud Sherif, a former assistant adjunct professor originally from Egypt, where he currently works, began attending International Coffee Hour as a graduate student at the university in 2015, where he earned his doctorate in geology. Sherif attended the events frequently.

“I used to be like a customer of the Coffee Hour,” Sherif said.

“Most of my friends I have so far, I met in the Coffee Hour,” Sherif said.

Through Coffee Hour, he got to drink one of his favorite beverages — “I’m a big fan of coffee,” Sherif said — listen to live music, meet people and get together with friends to start his weekend. Although he currently resides in Egypt, where he works as a lecturer of geology at Tanta University, he sometimes attends virtual International Coffee Hour in part due to nostalgia.

“When I feel lonely … sometimes I feel like ‘Hey, I want to go back to UD,’” Sherif said.

Sherif enjoys the educational character of virtual International Coffee Hour, deeming the “new information” a positive aspect of the new form of the event.

“In the trivia, they are making a lot of hard questions sometimes, so I have to think,” Sherif said. “It refresh[es] my mind.”

Although Sherif thinks the CGPS is doing a “great job” at keeping International Coffee Hour alive, he feels that being in breakout rooms makes it harder to mingle with others.

Furthermore, Sherif points out time differences and different off-days in Egypt — “Friday is the only holiday in Egypt,” according to Sherif, which makes 10 p.m. Egyptian time on a Friday somewhat difficult, especially given his workload.

Similarly, O’Brien points out that for some of their ELI students, including those from China, Saudi Arabia and the United Arab Emirates, the time of the event does not always work well with their schedules.

“It is an organic opportunity for people to actually talk because we are all college students mostly … we’re all kind of experiencing the same thing,” O’Brien said.

Similarly, Caro acknowledges the potential differences among attendees, but sees them as a valuable opportunity.

“Basically, everybody has a different journey and different paths, and with different journeys come different stories,” Caro said. “So, getting people to share stories with each other and getting to know one another is a way to kind of make the most of what makes UD great, which is its diversity.”

Given the uncertain nature of current times, there are no definite plans for the form International Coffee Hour will take in the fall. Caro hopes to “bridge the divide between [their] virtual presence, digital presence and in-person presence a bit more.”

“Because one of the things that I’ve learned about the virtual experience is that it can do things that in person, you can’t,” Caro said, citing as an example the challenges of students studying abroad and alumni to join the in-person version of the event. He is currently considering asynchronous features for future, in-person International Coffee Hours, such as videos and playlists made available beforehand.

In the meantime, for the CGPS, coffee (with an extra shot of Zoom) appears plenty enough to keep its community learning.

“Putting yourself in a position to try new things takes courage, but this also leads to great experiences and good memories,” Caro said. “Otherwise, what stories are you going to have to tell?”