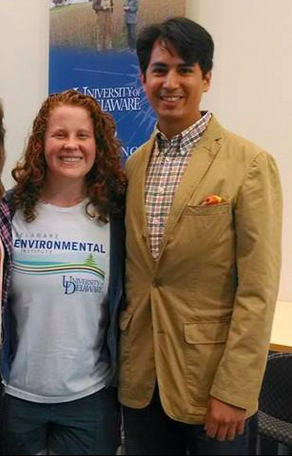 Cesar Caro/Facebook
Senior Becky Bronstein and Ph.D student Cesar Caro representing DENIN at Ag Day. The pair led the push for the creation of an Office of Sustainability.

More than two years ago, senior Becky Bronstein and alum Grace Relf (’14) began investigating who was accountable for sustainability at the university. Though the university had the Sustainability Task Force, the duo felt that more coordination was needed between efforts.

The manager is to lead campus-wide sustainability education and implementation, including through student organizations, academic departments and community organizations, according to the job description.

During the proposal process, Bronstein and Relf reached out to Ph.D. student Cesar Caro because of his involvement with Graduate Student Government.

It was these students who presented their case for an office to Alan Brangman, who was a university architect at that point in 2013, and is now vice president for facilities, real estate and auxiliary services.

Once in the vice president position, a white paper drafted by the students made its way to Brangman’s hands. The initial white paper was “quite aggressive,” he said, because it involved multiple hires.

At the time, Brangman said the university had already made a number of commitments, so the proposal did not immediately move forward.

Eventually though, Brangman took the white paper and examined its recommendations, then compared it to six or seven universities similar in size to Delaware to see what they were doing on the sustainability front.

“I came back, literally sat down one evening, and started drafting up the position descriptions from the six offices at other universities and the white paper,” Brangman said.

He had it vetted by his direct reports, shared it with Executive Vice President Scott Douglas and from there the position was in existence.

“The impetus really came from that white paper and my meeting with those three students, which was a little over a year ago,” Brangman said.

There are a number of positions that have gone vacant in facilities for next year, and the funds saved for those vacancies will be used to fund this position, Brangman said. These posts were already vacant at the time that this position was created; no jobs were eliminated in order to make way for the position.

Savings from energy initiatives were a key aspect of the students’ proposal to fund the position, and Brangman said it is possible to see direct savings from the manager’s work. He mentioned the savings created from switching the light bulbs used at the university as a case-in-point, and said the trick is to ensure the university is capturing the saved dollars.

The posting is “very much in line” with the original proposal for an office, Caro said.

“The creation of this position is a strong indicator of institutional commitment to real and lasting impact through facilities’ best practices, educational reform and engagement of on and off campus communities,” Caro stated in an email message.

Caro said he had “no idea” the job would be posted when it was, and said he was very pleased to see real progress toward coordinated sustainability efforts at the university.

“It’s only one step on the long road ahead, but it’s a momentous and significant one,” he said.

The creation of the manager of an Office of Sustainability comes at a time when the university’s planning includes an emphasis on sustainability.

“The president had already signed up for the president’s council on sustainability; it was already one of the priorities in terms of the types of things he wanted on campus,” Brangman said. “It is also bubbling up through the strategic plan process that we’re going through now.”

Brangman said there are thus far “a lot” of applicants. A selection committee is slated to convene in April and members hope to have the spot filled by July 1, Brangman said.