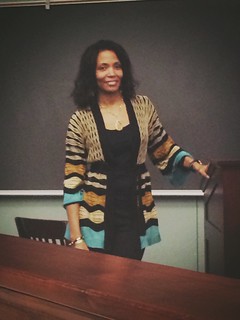 Robyn Phillips-Pendleton’s career has taken her in many directions when it comes to exercising what she does best―creating art. She interned for USA Today as a graphic artist, traveled to Haiti to capture the aftermath of the earthquake, worked as an art professor at the university and currently is illustrating a children’s book.

Phillips-Pendleton was invited to speak in Gore Hall Thursday, April 17th, to honor the FreshPAINT: African Art @ UD exhibition, which is currently on display until June 28 and focuses on select paintings and the style, content and methods used in creating them. Julie McGee, a colleague of Phillips-Pendleton and curator of African-American Art at the university, introduced Phillips-Pendleton at the event.

“I left the newsroom, but in my head I really didn’t leave the newsroom,” Phillips-Pendleton says, referring to her internship after college at USA Today. “I was constantly being intrigued by why do these things happen and how do I feel about them.”

Phillips-Pendleton’s life changed forever when The Pentagon called her asking her for her services. The Air Force artist program of the United States was looking for artists who like to tell stories and create imagery about events, Phillips-Pendleton says.

Phillips-Pendleton was hired for the job and asked to go to Haiti to create an image two weeks after the earthquake in the country in 2010, she says. This was an opportunity she couldn’t turn down, she says.

In Haiti, Phillips-Pendleton captured the living conditions of the US soldiers, she says. She slept in a tent and lived the military lifestyle in order to get accurate and creative shots of the conditions following the earthquake, she says.

Audience members were able to hear and see behind the scene’s footage from her trip. These pictures included the planes that she flew on to arrive and depart from Haiti, the officers she encountered and the people of Haiti. Event goers were able to see photos of children orphaned from the quake and how they were being cared for and transported.

Several years after her trip to Haiti, Phillips-Pendleton got another call from the Pentagon.This time it was for President Barack Obama’s second-term inauguration.

She showed her video footage of Obama from the inauguration and joked about her proximity to the president.

“People asked, ‘Were you really that close?’” Phillips-Pendleton says. “No, it was just a really good camera.”

Phillips-Pendleton was also able to join in the inaugural parade and capture moments from that experience.

During the lecture, she displayed for her audience various pictures of her work that had significance in her life. One piece was a poster that she was asked to do for Black History Month. The poster displayed a face of an African-American woman who had half her face painted as the American flag.

“The piece was a response to 9/11,” Phillips-Pendleton says. “This was the piece that said, ‘I really have something to say. I really have these concepts that I want to have these visual conversations about.’”

Audience members were then able to view on the projector some of Phillips-Pendleton’s pieces from her library. The pieces contained a combination of imagery and photography.

“From this presentation I learned a lot about how Robyn thinks and creates wonderful moving paintings from images, experiences and feelings that she has personally,” says O’Brien.

While creating her artwork, she always likes to keep in mind her voice, what she is saying and who she is talking to in order to communicate effectively to her audience, she says.

Senior Kerry Doring, a former student of Phillips-Pendleton, was also in attendance at the event. Doring attended the event to get a better understanding of her personal work processes, Doring says.

“To me, this approach to producing work, focusing on communication rather than depiction, blends that line between making work for a job or making the work she needs to express,” Doring says. “At the end of the day, having a better understanding of how other artists carve out the course of their own careers can only benefit us as students. We are at the very beginning of doing the same ourselves.”