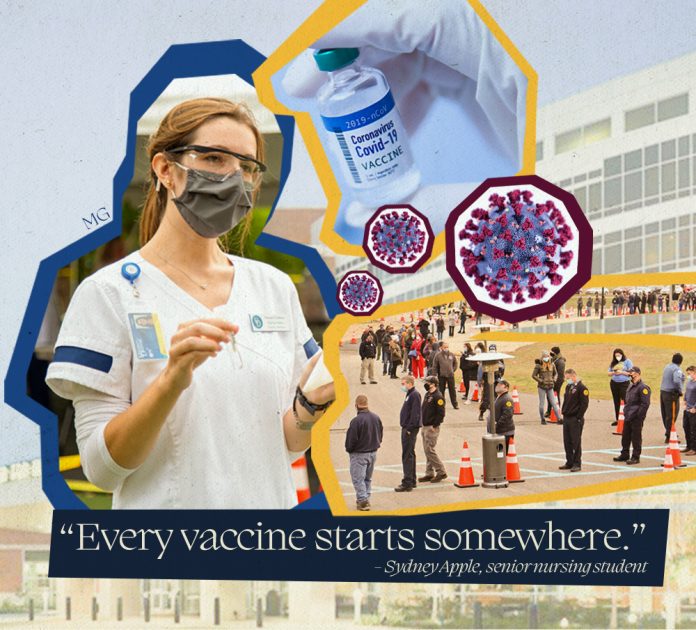 The roll out of COVID-19 vaccines across the country has brought forth excitement to those who see it as an end to this global pandemic. Many people, although anxious, have to wait their turn due to prioritization rounds set in place. However, nursing students at the university were recently able to get the vaccine.

Senior nursing students Sydney Apple and Chelsea Rivera both received the two doses of the Pfizer vaccine at Christiana Hospital. Both students said that they knew in advance that they wanted to get vaccinated.

Apple mentioned how in her nursing classes, the topic of vaccines was discussed, as well as their importance. To her, the benefit of not contracting COVID-19 outweighs the risk of possible side effects.

On the other hand, Rivera said she had lesser symptoms. She experienced a sore arm following both doses but said the pain was worse for the first one.

According to them, the first dose was easy to get, but the second dose was more difficult as there was a shortage of supplies.

Apple responded to the occasional event of members of the public displaying distrust or worry surrounding receiving the vaccine, citing the aforementioned side effects that she experienced.

“I just feel like they wouldn’t release and vaccinate a mass amount of people if it wasn’t safe,” Apple said.

Rivera also addressed the various conspiracy theories surrounding the vaccines, such as microchips being implanted in people through the vaccine shots.

“I don’t know what kind of microchip that would be,” Rivera said. “That’s a conspiracy to me.”

In regards to the rumors and worries about the COVID-19 vaccines, Rivera advised those who are concerned to do research from the Centers for Disease Control and Prevention website as well as talk to their doctor. She recommended getting the vaccine to “protect not only yourself, but your family as well.”

According to Apple, the vaccine will help move things along while trying to get out of quarantine, emphasizing that the public should trust the scientists behind it all.

“I think every vaccine starts somewhere,” Apple said. “This is probably what people said about the flu vaccine when it first came out, and now, most people get it every year. Many people were worried about how quick the [COVID-19] vaccines came out, but taking into consideration the amount of money put into it, explains its expedited release.

Apple compared it to the polio vaccine, which took up to 10 years to release, showing that medicine and science have come a long way.

In regard to the current vaccination goal of herd immunity, Rivera explained that there is a certain percentage of people who will need to be vaccinated in order for it to be acceptable to no longer wear masks in public places. Although, she said it might take a while.

Rivera’s parents are both vaccinated, but said they will keep wearing their masks even if regulations are no longer in place.

“I feel like masks are going to be considered [normal afterwards] … I feel like no one’s going to look at them weird,” Rivera said.

According to Apple’s aunt, a nurse that works in urgent care, a positive effect of wearing masks and social distancing has been a decline in the number of flu cases.

The COVID-19 vaccines will continue to be distributed; it is only a matter of when the vaccine will be readily available for everyone.