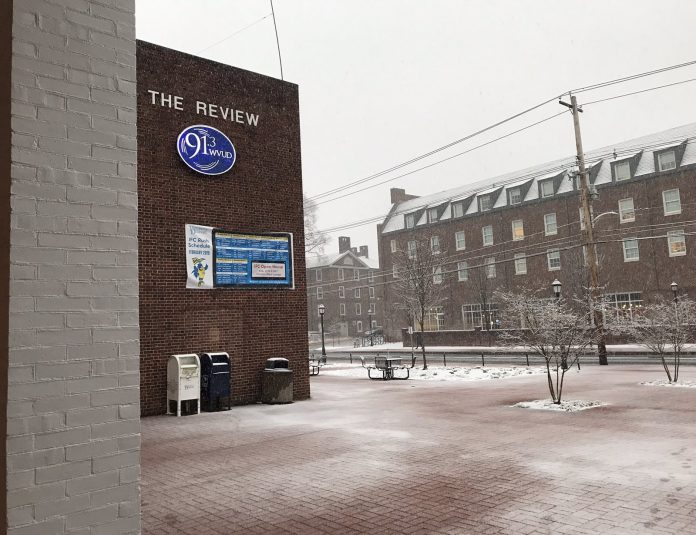 The Diversity, Equity and Inclusion(DEI) Board was put together in fall 2020 in an effort to maintain and foster an environment welcoming to every member at The Review, regardless of race, ethnicity, sex or gender. Our newspaper was established in the year 1882, meaning that while that makes us one of the oldest student organizations on campus, our history is very much riddled with discrimination and exclusion and means that we, as a collective, must simply do better. That is where the DEI Board has stepped in: to ensure a more inclusive newspaper.

The DEI Board has met on a biweekly basis since the fall, and in this time has worked diligently behind the scenes to provide and compile a variety of resources and suggestions for members of The Review to take into consideration when producing content. This includes actively searching out diverse sources for opinion pieces, gathering helpful information for staff and ensuring that The Review’s values are accurately reflected and represented by said staff. The Board also has met and trained with a representative from the university’s Student Diversity & Inclusion department.

Each member of the Board has their own personal reasons for joining and wanting to bring more diversity and inclusion into The Review:

(Mal-uh-knee) As an Indian student with a traditional name, I remember how nervous I would get when a teacher would stop on an attendance sheet. I knew they were struggling to pronounce my name and before they had a chance to say it wrong, I would stop them and say my name out loud so they could understand how to pronounce it. I wish I could say that after hearing it once they could say it properly; however, this same process continued to repeat itself until they got it right or I just gave up. As someone who was heavily involved with extracurriculars, teachers knew who I was, they just didn’t want to give me the respect of learning how to say my name. I ran into the same issue when it came to bringing Indian food to school. The glares I would get from other students and teachers coming to ask me “what’s that yellow stuff  I’m eating” made me more embarrassed to represent the culture that I wanted to show off. I grew up in a public school system where, instead of making kids feel accepted and wanted, they inadvertently forced them to assimilate to a more western culture.

It was identical when it came to race. My high school was a predominantly white school, so if any student felt mistreated, they were hesitant to speak up. Racist comments were written off as poorly made jokes, and the term “ghetto” was used too loosely. Unfortunately, it had to take the recent uprising of the Black Lives Matter movement to really highlight the injustices that Black people have to go through every day.

I was hoping that my tainted high school experience would vastly improve when it came to college. I mean with a student population of almost 24,000, there had to be some diversity, right? Little did I know that three-fourths of the population was white, which subsequently led to most of the Registered Student Organizations (RSOs) on campus not representing the minority population. I didn’t want my time at the university to be identical to high school as far as being not representative or vocal about my beliefs.

This led to me joining The Review’s Diversity, Equity and Inclusion Board. As a woman of color and someone who loves journalism, I knew this would be the perfect opportunity to be able to report news that represents the student body. In the era of “fake news” and manipulated ads, newspapers should be focused on telling the truth whether it be hard or not. The only way it can achieve that is by accepting its role as an inclusive source. Increased diversity is needed to open up more reference points and allow more opinions when making decisions. In other ways, it helps ensure that what the newspaper is putting out does not have a bias or close-minded perspectives. Minorities are already an excluded group in the country, and with Caucasians being the majority demographic at the university, its vital that The Review appeals to all of its readers, of all ethnic and cultural backgrounds. Diversity, equity and inclusion help ensure that the final product tells the widest possible range of stories, which is the very purpose of reporting news. In modern day, everyone has the resources at their fingertips to stay informed; it is our civic duty that what we are reporting on is not only true, but representative of their readers. I believe that is the only way to be viewed as a legitimate news source.

Diversity, equity and inclusion are three pillars that each newspaper, local or national, should be working to include in all of their writing. I couldn’t be prouder of the conversations that I was a part of and the list of resources the team has created to aid in making our articles more representative and relatable.

I was sitting in my AP Literature class in eleventh grade when I looked up from my computer and scanned the room. Then, I thought to myself,  “Well, looks like I’m the only one again.”

Over time, I learned that being the only one was not as grand as an achievement as others made it out to be. Family members would be so proud of the accomplishments that I, an African American girl, made while all I could think about was “Where are the rest of us?” This realization did not truly hit me until high school when I moved school districts – that’s when the pattern emerged. And yes, now and again there would be more than one Black person in traditionally white spaces, but for the most part, it was just me and the white faces that surrounded me.

This trend not only continued but worsened as I started attending the university. But, after years of dealing with it, I thought it would be more productive to do something about it other than complain. So, I started by simply having conversations about race with my family and friends. Then, once I joined The Review, I realized that I had a larger space to talk about issues that matter to people outside of the majority. This interest in inclusion is what propelled me to join The Review’s Diversity, Equity and Inclusion Board. Bringing in stories and people that voice the concerns and opinions of socially disadvantaged groups is something that is very important to me. I believe that when I started at The Review this fall I was the only Black person at the meeting, and that is something that I believe must change.

My hope for the board and the newspaper, as a whole, is that people of differing backgrounds, ethnicities, nationalities, genders and sexual orientations can coalesce and truly diversify and grow the newspaper. No one should feel like the only one.

When I initially visited the university as a prospective student, one of my biggest concerns was simply alienation. As a biracial woman, a lot of my high school years were spent coming to terms with my diasporic identity and broken connection to The Philippines and my family overseas. Further, I had never been in that sort of situation before, where I was “othered”; rather, I grew up in a major city and went to a huge performing arts school whose racial demographics typically split 50-50 between white students and students of color. Feeling alone because of who I was or what I looked like wasn’t too much of an issue then: I was completely hyper focused on the personal issue of finding ways to honor both ends of my own racial spectrum.

The university’s race demographics for undergraduate students, with the majority being white students at 80%, can be jarring to a person of color, and can be even more difficult to experience once one arrives on campus. The amount of stories I heard over the years — the amount of stories I’d share — about walking into a room of 50-plus students and still being the only person of color in the room, certainly tinged my college experience. When I joined The Review in 2018, it was once again one of those “tinged” experiences.

With all-white leadership and a majorly white staff, it was clear that the paper was inadvertently — but sincerely — missing out on a variety of important voices. It was clear in staff photos, and it was clearer in staff meetings.

Internally, myself and a lot of other staff chalked it up to it being a microcosm effect of the university-at-large: an 80% white school will obviously be reflected in its registered student organizations, in its staffing, in what you see and what is advertised to you. And it went pretty much silently accepted for an extremely long time, right up until the resurgence of the Black Lives Matter movement this past summer — when the university began to openly condemn racial hate crimes and provide more specific support to its BIPOC students, who had been ignored for so long prior. Further, these actions only took place from the external pressure of the BLM movement.

Further, the university even developed a consciousness in regard to the indigenous people in the Newark area and began incorporating land acknowledgements to a certain extent — although I must confront the fact that a simple two-line land acknowledgement can come across as flimsy and performative without actual context for the tribes mentioned.

Simply, the university has begun to try. It’s not admirable; it was expected. It was waited on, it was anticipated and it was unconfronted, for an extremely long time. I joined the DEI Board because I know that in a variety of ways, everyone can do better. No matter how race-conscious or how “woke” you are, you can always do better, you can always learn more and similarly, so can I.

The Board was an attempt to make things better, to educate our staff and to simply have a resource whose sole responsibility and purpose is to amplify those voices that were previously stifled or silenced. This is something that will impact the newspaper for generations to come, and I am proud to be a part of it.

The 2020-2021 DEI Board hopes that our contributions this year will not only affect the newspaper for years to come but will help future generations of reporters and staff feel more confident in their abilities. We hope to provide a resource to expand upon what reporters already know, encouraging them to begin and foster open discussions around diversity, to use us as a resource and discussion space and to amplify more voices within the university and Newark Community.