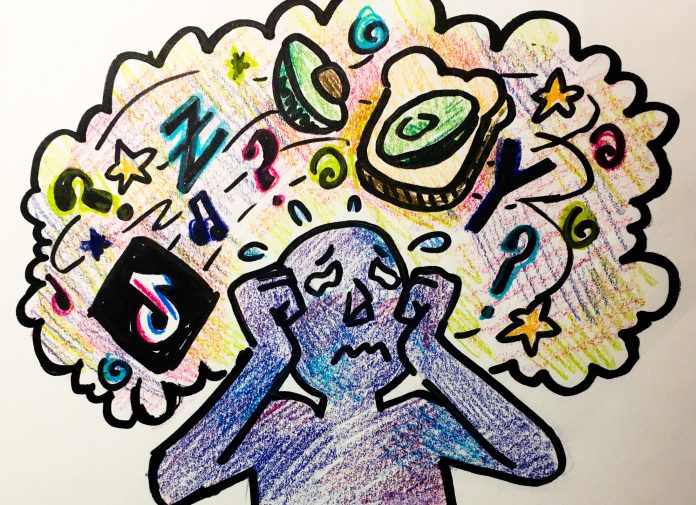 Let it be known that in 2021, intergenerational comradery between millennials and Gen Z came to an end over a disagreement about how to part hair. Yes, really.

Recently a war between millennials and Gen-Z has been brewing on Twitter and Tik Tok, and from what I observed there are two main points of contention. According to Gen Z:

I’ve noticed that some millennials seem to be very upset about this, as side parts and skinny jeans are somewhat of a staple in their style. They have taken to Tik Tok (an app that primarily caters to Gen Z) to express their discontent, some of them choosing to do so in song form.

Tik Tok user @sarahhesterross loudly exclaimed that Gen Z could not tell her what to wear in her song titled “GenZ You Can Suck It,”which garnered both praise from her millennial counterparts and widespread mockery from Gen Z. Personally, hearing the song makes me want to take a bath with a toaster.

Twitter user @JessicaValenti tweeted “someone needs to write an article about TikTok teens’ obsession with hating on the side part (yes this is a thing). I’m fascinated.”

I’m fascinated as well. Because as far as I’m concerned, millennials blew something that’s not a big deal way out of proportion and are blaming the younger generation for their problems. Or, basically, they have become the very thing they hate the most — Boomers.

I somewhat understand where the frustration comes from. As a 19-year-old who will soon be 20, I consider myself to be a member of Gen Z that suffers from a very mild case of imposter syndrome. I was raised and influenced by millennial culture, so I too rocked a mean side part in middle school and currently own at least three pairs of skinny jeans. I’ll admit I was a little bummed when those things went out of style, but I certainly wasn’t bummed enough to make a cringey diss track about Gen Z in retaliation and post it on Tik Tok. Because that would be weird.

I think what’s happening here is that some millennials have a fundamental misunderstanding of what pop culture is. Pop culture, by design, is literally always changing. New things become popular and the things that were popular before go out of style. Such is life. And right now, Gen Z decides what’s popular and what’s not, just like every generation before us did.

Also, Gen Z is not all children, yet most millennials are under the impression that they are.  The official age range is another topic of debate, but the general consensus is that Gen Z currently consists of people between the ages of six and 24. That means a lot of Gen Z are in their late teens or early twenties, which is the age group that has most influence on pop culture right now.

It’s honestly upsetting that in 2021, out of all things, fashion trends are what we’re fighting about. Even opinion writers for credible publications like “The Guardian” are urging people to take sides, and to “unite against the common enemy: Gen Z.” This pointless feud is giving me horrible flashbacks of the whole Team Edward vs Team Jacob debacle that tore apart the nation for no reason circa 2011.

The most insidious thing about this war is that it managed to divide the two generations that are the most likely to make the biggest social change in the world. There are so many more pressing issues we could and should be tackling right now, but instead some millennials are choosing to pretend like they’re oppressed because a 16-year-old doesn’t like their side part.

So please Millennials, on behalf of all the members of Gen Z who couldn’t care less, grow up. We’re supposed to be the dumb kids that eat Tide Pods for fun, not you.

Stephanie Maria is a staff reporter for The Review. Her opinions are her own and do not represent the majority opinion of The Review’s editorial staff. She can be reached at stephmar@udel.edu