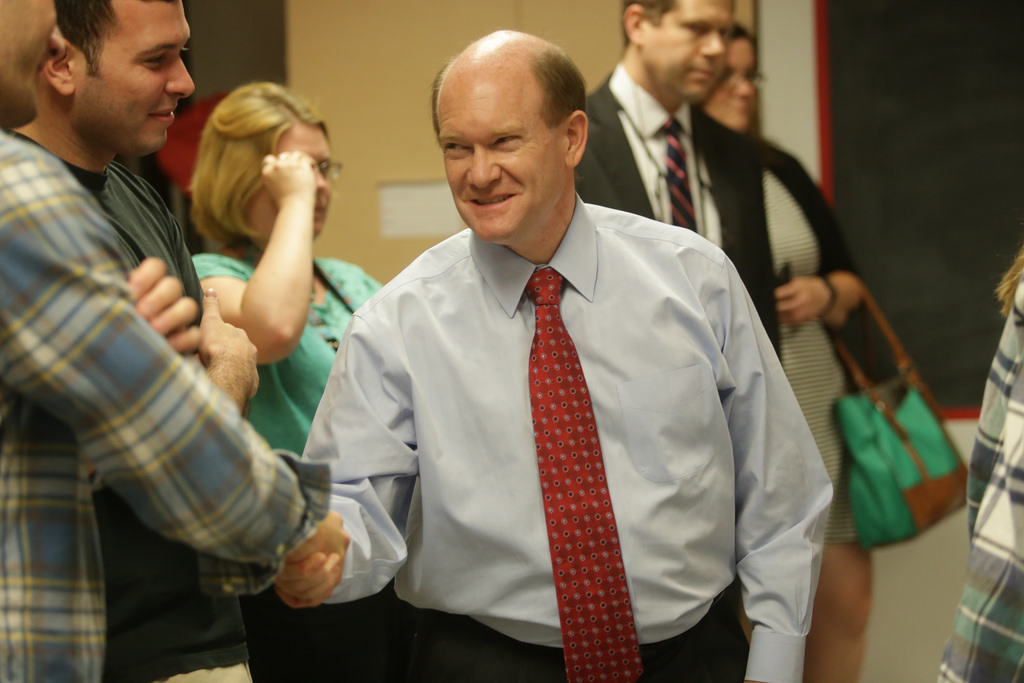 A Tuesday afternoon fireside chat brought together Dr. Francis Collins, the director of the National Institute of Health (NIH) and Sen. Chris Coons for a discussion moderated by university President Dennis Assanis. The conversation centered on the current state of the country’s health care, the future of health innovation and religion’s place in the laboratory.

Collins opened his statement towards the audience by addressing the top three health related issues in America today. He included cancer, vaccinations and the opioid epidemic as the primary arenas that should receive the bulk of our funding to avoid further catastrophe. Addressing the importance of vaccinations and the controversy around current anti-vaxxers, Collins made it clear where he stands.

“We gotta think about the next real threat, worldwide, in terms of a biological catastrophe, and that’s not a bioterrorism act by human actions, it’s bio-terrorism by nature, and it’s called influenza,” Collins said. “We’re overdue for the emergence of a really bad virus… what we need is a vaccine that works for all influenza strains.”

Collins addressed Sen. Coons’ own contributions to the funding of a universal flu vaccine, thanking the Senator’s own political agenda that heavily emphasises funding for vaccination study.

“I gotta say, Senator Coons understand all of the complexities of what medical research is about,” Collins said. “ He has been a phenomenal support of that influenza vaccine”

Sen. Coons is a scholar of ethics, science and law, which has led Assanis to declare him as “probably the smartest senator.” Throughout his ten years on the Senate, Coons has successfully fought to increase the budget of medical research by helping secure a $2 billion increase to funding for the NIH.

From the importance of the flu shot, the conversation quickly strayed to prevention versus treatment as Assanis asked Collins how to balance prevention and treatment of the flu.

Collins used this opportunity to introduce one of the NIH’s newest research projects called, “All of Us.” The study aims to collect one million American’s medical history, blood samples and DNA to create more individualized prevention techniques.

“The current prevention guidelines are a one size fits all, “Collins said. “We want to move this into something called precision medicine, where it’s about the individual.”

Collins and Assanis both noted the somewhat intrusive-sounding nature of this study after a slight grumble from the audience, but Collins revealed that as of last May, 188,000 people had already signed up and donated their information.

The NIH is the nation’s center for medical research. It is a major funding source for research facilities, including universities, with 80 percent of its $39.2 billion annual budget dedicated to studies conducted at research colleges.

In concluding the chat, the two speakers, who are both men of faith, invited their religious beliefs into the conversation. Throughout their conversation, both made it clear that they did not allow their religion to influence their political decisions, but rather used it as a guiding map.

“The idea of the value of the individual, the idea that each of us has special characteristics, that each of us is worthy of respect, you can reach that conclusion with completely non-religious ethical means,” Coons said. “You can reach that conclusion for any of the great religions in human history. I’m somebody who was elected to represent 900,000 people and I try to remember that I represent a state with a very robust range of faith traditions, folks who are my constituents who have no faith but are ethical, good people.”