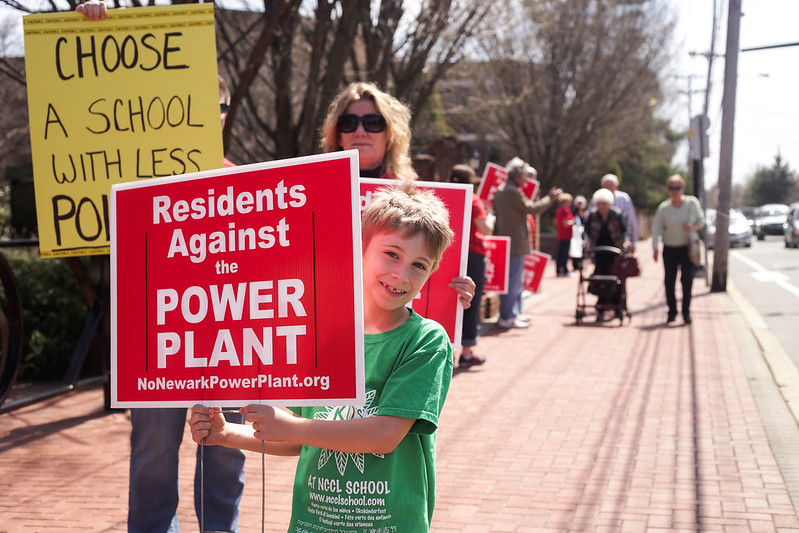 Kirk Smith/THE REVIEW
For the second weekend in a row, students and residents opposed to the power plant took to the streets to inform prospective students of the proposed project on STAR Campus.

For the second Saturday in a row, students and city residents stood at university street corners with signs and fliers to protest The Data Centers LLC’s (TDC) plans to build a 279MW natural gas-fired power plant on the university’s STAR campus.

This week’s protests, which were once again led by Blue Hens for Clean Air with the support of Newark Residents against the Power Plant (NRAPP), were characterized by increased student involvement, said Jan Baty, an instructor in the university’s music department.

“In this process, I’ve been inspired constantly by what students are able to do,” Baty said. “They are knowledgeable and active, and it is through their work that UD’s Green Senate has been enlivened, and an online newsletter that has over a thousand subscribers has been created.”

Student, faculty and resident collaboration began over Thanksgiving break when a group convened to discuss the power plant’s environmental effects and the group has become affiliated with NRAPP, Baty said. It then organized environmental advocacy training on campus, and through that training the group expanded and now meets weekly, she said.

Newark resident Melanie Cords, who participated in Saturday’s protests, also said she was impressed with student interest and involvement.

“The students are out here handing out fliers, or coming up to us protesters thanking us or asking how to get involved,” Cords said. “To a lot of them I think it is important that the UD community remains a beautiful place to live and go to school.”

Sophomore Nicole Patrona said she was protesting because she thinks for a campus that claims to be environmentally conscious and ‘green,” there should be more emphasis on sustainable energy.

“I think a lot of people argue that it is the ‘cleanest way to create energy that we have readily available,’ but to me that’s not an argument,” she said. “Because that means it’s not clean––it’s just the most clean out of the not-clean things. That’s not a solution to me.”

The university and the world as a whole need to place more importance on finding alternative sources of energy, because if we ruin our environment we ruin ourselves, she said.

According to TDC officials, the power plant is expected to emit up to 2,000 tons of CO2 per day.

Junior Jake Karis, who was also protesting, expressed his confusion about what he viewed as the “excessive” nature of the project. He said he was not sure where all this energy would be going.

“I’m all for transparency, and I feel this business, The Data Centers LLC, is not showing any transparency in their dealings here in Newark whatsoever,” Karis said. “The plan isn’t finalized for the project, yet we’re talking about it very seriously. I feel like this company needs to be reviewed a lot more.”

TDC, a $1.1 billion dollar project, has no other current data center sites. However, CEO Gene Kern previously headed a similar proposed project at Rowan University, though it was ultimately turned down.

“I don’t think we should be their experiment, especially when Rowan University rejected the same plan,” Karis said. “It’s also just strange that we are receiving no definitive answers from the company or the university.”

NRAPP chair Jen Wallace also said she has not received sufficient answers from the university as to why they are building this power plant, especially when it violates the trust of residents.

Wallace said NRAPP is waiting for the next Board of Adjustment meeting on April 29 when the appeal process will be finalized. It is also going to collaborate with the working group charged with evaluating the power plant, asking them to investigate specific things, such as where the air pollution will fall, the effect on area water sources as well as the estimated fall in property values, Wallace said.

“We are going to ask more questions of the university and demand to be heard,” Wallace said. “This is our community and we should be more informed than we are.”